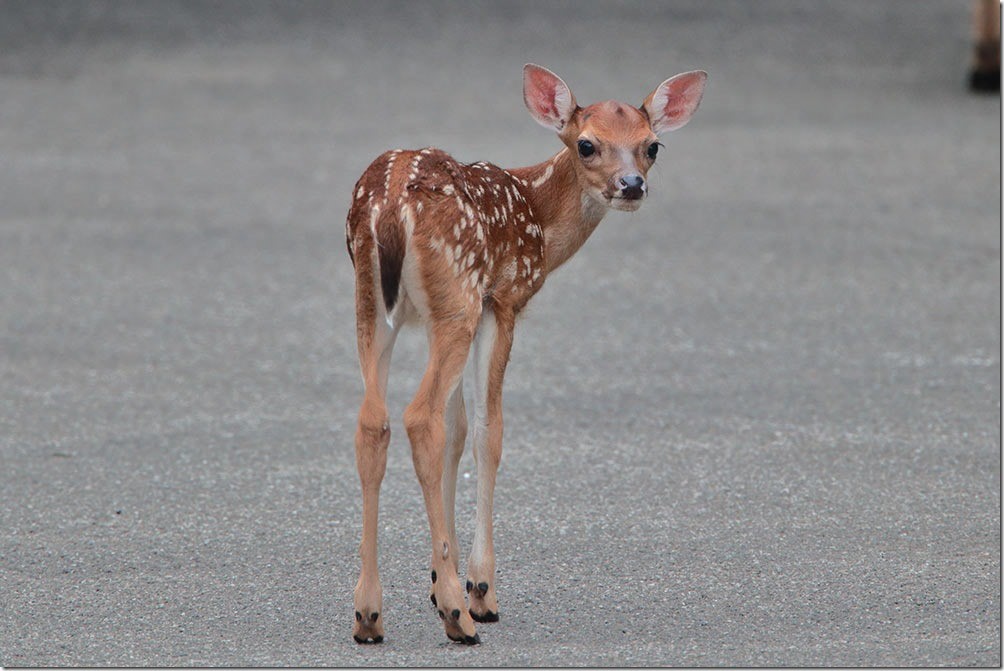 The white-tailed deer are settling into their summer routine.  Each evening, usually after 7:30 or 8 p.m. the bucks parade down the street, stopping first at a neighbor’s to nibble bird seed and then stroll across the cove to our yard to drink out of a clay urn and bed down for a while.  They are shadows in the darkness, gliding past trees and bushes, weaving across lawns.

The does travel separately, sometimes in small groups, sometimes alone.  There is one doe who visits each morning to get a drink and returns in the early evening to graze alongside the house.  We wondered if she might be pregnant, especially when we didn’t see her for a few days. Then on Tuesday a doe with a tiny fawn appeared right around the corner from our house at the beginning of the trail.  The doe grazed quietly while the little fawn pranced in the grass.  It was so small!  It stopped for a moment to study Daisy and me.  I rushed back to the house, startling a couple of bucks at the fence gate, and grabbed my phone.  Keeping my distance, I managed to get a few pictures of the pair just before the doe decided it was enough and led her fawn away.  We can’t assume this is the same doe, but I like to believe it is. 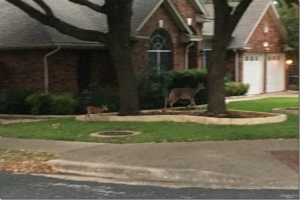 Each night we walk through the neighborhood searching for does and fawns.  The evenings are the best time, walking just as darkness falls when a strong breeze makes it feel cooler than it actually is. This spring we’ve been particularly lucky, beginning with the doe and fawn we saw on May 30.  One evening we spotted a doe slinking around the corner of a house and into the backyard where a little fawn was nibbling on grass.  The doe turned out to be the piebald deer with a large white patch on her back, the doe we call “Mrs. White.”  She is one doe we are able to recognize consistently and it was so exciting to see her with a fawn.

Today and counted five fawns and twelve adults.  It was late morning and some of the deer were bedded in the cool grass.  All we could see of one fawn were two tiny ears sticking p through the grass.  There is also a doe with twins who travels behind the houses and in the woods nearby.  One day we caught them crossing our driveway in the middle of the day. 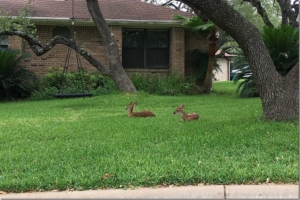 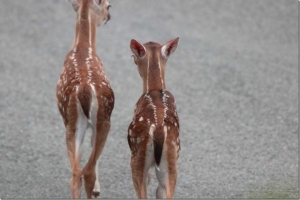 The pair of foxes have been very active lately, hunting every evening just as darkness falls.  One evening the female showed up around 7 when it was still fairly bright out.  She was close enough to the window that we could see she is nursing, so the pair must have a den close by.  What we haven’t seen are coyotes, not since winter, I think.  The male looked better then, but still had mange, especially on his tail.  They used to show up every now and then in the yard, and I would see them in the stormwater drainage area.  All I can think of is that they’ve moved on.

The first water lily has opened, a bright pink that closes when the day becomes hot.  It seems like the pond is slowly creating its own ecosystem.  The little minnows are growing in energy and size, darting around the bottom of the pond in between the lily pads, rushing to grab flakes of food.  One night a frog visited the pond, sitting on the rock at the edge singing loudly.  The next day tiny tadpoles appeared, and the day after that it seemed like a million tadpoles were living in the pond, swimming around the plants and clinging to the sides of the pond. 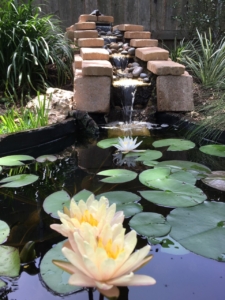