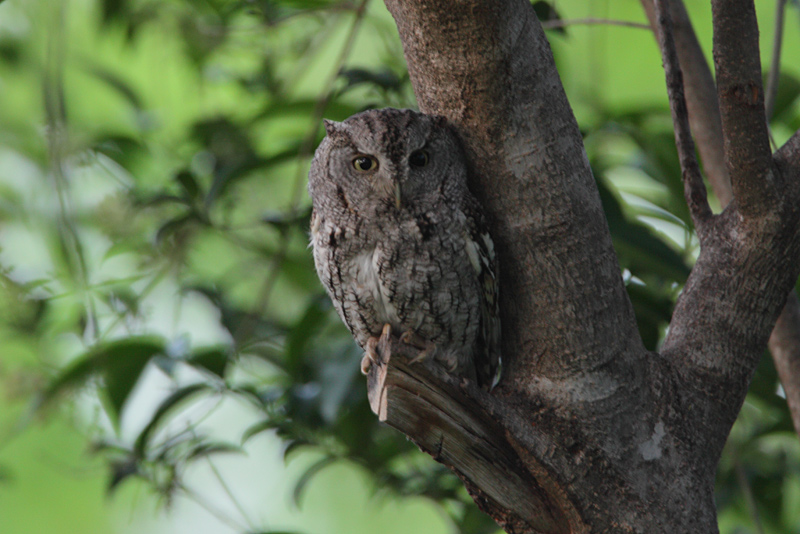 The owl peeks out of the entrance to her box.  She is anxious to leave, her head inches outside the opening.  It is 7 p.m. and still light, even in the grayness of an overcast sky.  Daylight savings has screwed up everyone’s schedule.  But not the owl’s.  She has her own schedule.  She is waiting for darkness or is just anxious to leave for a while.  Yesterday I checked the box at 1 p.m. and it was empty.  For a moment I was struck by panic – she was gone.  Yet I know how long she’s been there, months guarding this spot.  Yesterday was in the 60s and after a week of warm days she probably wanted to get out and enjoy the rain on her feathers.  I wait for her to leave.  Usually darkness falls around 7 and hides her flight; now it may not be until 8, another hour or so.

The screech owls sit next to each other, perched on a high branch of a wax leaf ligustrum where they can watch the owl box.  The female was not in the box on Friday, or yesterday and I felt the all too familiar feeling of panic when something doesn’t go the way you’d like it to.  An owl has been in the box since September, guarding her spot.  This last day of winter is warm, too warm to stay in a nest without eggs.  The pair sits on the branch, opening and closing their eyes, waiting until the sun goes down when they will swoop into the yard and over the fence to the neighbor’s yard.  There was a small bird in the box this week, cached in a corner, so the box is being used.  This afternoon, pulling weeds from the yard, I swore I heard trilling in the middle of the afternoon.

It’s happened again.  The owl that sat in the box, day after day since September left the box a week ago Friday.  This week the male and female pair sat in ligustrums, their gray and white feathers peeking out between the waxy green leaves.  The box is now empty and there are no eggs.  Why would an owl sit in the box for almost six months and leave?  This has happened two years in a row.  I sit outside in the backyard waiting to catch sight of them.  One evening this past week the pair flew across the yard, perched on the box and hopped in.  In a matter of minutes they looked around, leapt up to the entrance and were out of the box.

A friend of mine who has owls in her yard reminded me that owls are branchers.  The owlets need a place to perch and explore their world before lifting their wings and diving to the ground.  Often they climb up the tree trunk to a safe branch.  The clutches raised in my owl boxes have fledged in a do or die method, floating to the ground and then finding the nearest fence or tree to climb up.  In my head I argue the virtues of owl box being on a tree trunk versus a stand-alone box.  Given the squirrel population surrounding the pecan tree in my yard there simply is no good alternative.

The neighborhood is not without owls, though.  An owl has been visiting Tim’s box regularly since the beginning of the month.  She seems young sitting in the middle of the sawdust, fluffing her feathers, not knowing what she’s supposed to do.  For the past few years a pair of screech owls has nested in Tim’s backyard in an old sycamore tree – only a couple of feet up from a state of the art owl box, complete with camera.  The female, and later owlets, looked out of two different holes, one above the other, taunting us.  Later that summer one of the adults died, most likely killed by a cat, and the old sycamore tree had to come down.  This owl is the first to nest in Tim’s box since 2010 and we are hoping for another chance to watch owlets hatch and fledge.

In a neighborhood just west of here, a pair of great horned owls nested in a huge leafless walnut tree.  The nest sits in the yoke of the tree, fairly low on the trunk.  Tim and I viewed the family of two adults and three owlets one Saturday afternoon where Mom and the owlets sat in the V while Dad watched from a high branch in a neighboring walnut.  The three owlets are fuzzy and larger than one would expect, like big, dusty cotton balls. They open and close their beaks to control the heat on a too-warm-for-March day.

A pair of killdeer has made a nest in the corner of a standard in the grass arena at Scattered Oaks where I keep my horse.  Four speckled eggs sit neatly in the middle, expertly camouflaged.  The female covers her brood, patiently spreading her red brown wings while her mate scurries around in the grass diverting traffic.  This week a curious black bird stepped near the nest interested in the goings on.  The female stayed put.  Secure from footfall of horses in its barrier, the nest is still precariously placed.  Fortunately, riders are aware and trot their horses away from the nest.  A riding arena is not the best place for an avian playpen. 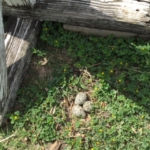 Spring began weeks ago here.  Evening primroses bloom throughout the neighborhood, spilling over the banks of the arroyo.  Bluebonnets line Highway 290 and Scattered Oaks is an explosion of color with wildflowers gathered in bunches and bordering arenas.  Bluebonnets and Indian paintbrush spread across fields at the edge of paddocks and turnouts.  The amaryllis in my garden are budding, two tall stems capped by long, green ovals striped by red.  The single daffodil in my garden is already fading, its petals shriveling. 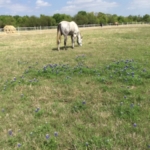 I will miss winter.  Aside from one hard freeze in January that left behind broken pipes and wilted plants, winter barely arrived before it was gone.  Christine Paintner writes about the monastic tradition of statio, “the practice of stopping one thing before beginning another.”  “This place between is a place of stillness, where we let go of what came before and prepare ourselves to enter fully into what comes next.”  Winter is a perfect time to be in statio, a time to withdraw a little and plan for “what comes next.”

Tim’s owl has laid an egg.  We watch carefully each day for another egg to appear, and then another.  We are waiting for “what comes next.”