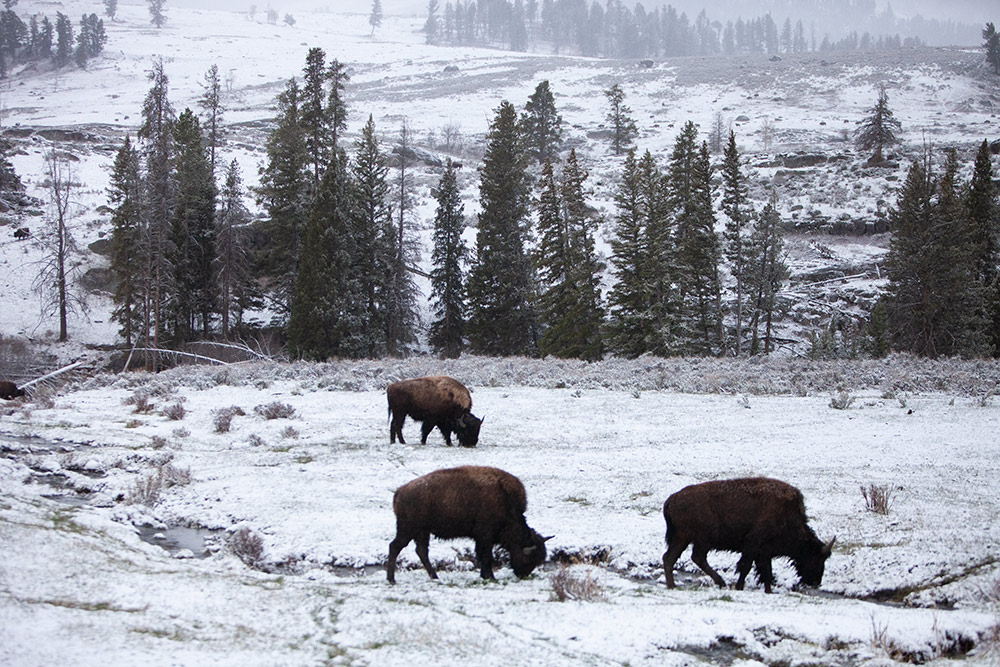 The Edge of Winter

It was fourteen degrees and snowing when the plane landed in Bozeman.  By the time I reach the empty ranger booth at Gardiner the snow has stopped and it’s cloudy, dark, and getting darker.  Evening shadows surround me as the jeep winds slowly up the hill to Mammoth.  The headlights reflect off the road and snow in gray, blue and white.  Colored lights twinkle from the administrative buildings and General Store.  A huge pine tree towers above the buildings, glittering red, green, yellow and blue.  A hare pauses in the middle of the road, then hops away.

I don’t think I even notice how cold it is until I step into the phone booth at Mammoth, pushing aside about 6 inches of snow as the door slides open, and shiver while I talk to Tim, telling him about how dark it is, cold but okay, the flights . . .I drive straight through to Silver Gate, hands frozen to the steering wheel, eyes on the road straining to see any movement.  I can barely see ten feet on either side of the road as the jeep crawls up and down hills, past Floating Island Lake and Petrified Tree and all the other landmarks I cannot see now in the silent blackness.  A coyote trots up the road in front of me and I follow his gray body gratefully.  I have no idea where I am.  Finally, I pass through the Northeast Entrance and the “Welcome to Silver Gate” sign.  It has taken me an hour and a half.  From the cabin tucked away in the trees I look out the window at piles of snow and the mountains towering above.

The last week of September, Yellowstone was a blaze of color.  I cannot remember such a golden fall.  Aspens on fire, glowing yellow, tall grass, the color of wheat, swaying in the breeze.  Red-brown bison calves, not yet two months old.  Clear blue skies.  In perfect Indian Summer weather we watched bull elk defend their harems.  Across from the Mammoth dining room, a huge bull with a beautiful rack stomped and pranced around, bugling his long, high pitched song and chasing frightened cows.  This particular bull had a history of punching cars, so a ranger warned visitors to move their cars, and themselves, out of the area.  Last fall, reluctantly, rangers sawed off his magnificent rack to prevent him from doing any more damage.  And again this year, by the end of the week his antlers were gone.

Fall is a quiet time in Yellowstone in many ways.  The subtle preparation for winter is obvious to those who look.  Bears start moving toward their winter dens and are less visible.  Elk begin to migrate down from the hills into the valleys to warmer temperatures and winter grazing.  The wolves follow them.  The aspen and cottonwoods change color and the entire Park glows bright yellow and gold.  The ground squirrels are absent, having already dug underground for their nine-month hibernation.

What I noticed most was what I didn’t see.  We saw only one grizzly in Lamar Valley and a sow with three cubs from a distance so far they were merely dots on the spotting scope.  There were less elk in the Lamar and we did not see many moose.  The most noticeable difference was in the wolf population.  We didn’t see the Druids in September.  Not one.  For as long as I have been traveling to Yellowstone, the Druid Pack has ruled the Lamar Valley and I have watched them every trip.  The first wolves I saw were 21M and 40F, the alpha pair at that time, traveling along the tree line near Amethyst Bench.  Now, those Druids are gone and some of the original pack members, like 253M, have dispersed.  What remained of the pack left the valley, denning in the Cache Creek area, pushed out by the Slough Creek Pack.

Fall was warmth and comfort and elk bugling in the excitement of rut.  Grizzlies were still high up feeding on the best white bark pine nut crop they have had in a couple of years while black bears foraged in the Tower area.  Wolves kept their distance from the roads, but were watched in Little America and Lamar Valley.  Yellowstone was busy preparing for winter.  And so, in the first weekend of December I came back.  I came back because I did not get enough.

The next morning is cold but windless.  About an inch of fresh snow covers the jeep and cabin steps, easily brushed aside.  Yellowstone is silent, white.  Snow blows across the road and through the woods.  Hardly anything stirs except a bird flying up from the pavement until I reach Round Prairie where a herd of cow elk, frightened by the jeep lights, leap across the road and run into the meadow near Pebble Creek.  By the time I reach Soda Butte Cone, the snow stops and the roads are clear.

Last night in the dark I saw almost nothing.  Now in the morning light, bison are scattered everywhere, shaggy brown coats dusted with snow, breath streaming from their nostrils.  Several big horn sheep, rams and ewes, look down from a steep hill overlooking the Confluence.  They are grazing along a path used by bison, who amble slowly along the game trail, in between and around the sheep.

The elk have moved down from the mountains to winter feeding grounds.  Their rich brown fur is thick.  They paw at the snow with their hooves, searching for grass.  The bulls still have their racks and instead of fighting each other, they graze contentedly away from cows.  One magnificent bull grazes alone next to the road in Blacktail Deer Plateau.  Later in the afternoon, when I return from Mammoth, he is almost in the same place, staring at me through the open jeep window.

A friend tells me the wolf viewing has not been good the past few days.  The Slough Creek Pack is off near Mt. Everts while the Druids make only occasional visits to the Lamar.  The Druids are now a small pack of four wolves:  480M, still the alpha make, 302M, and two beautiful gray female yearlings, who are the last offspring of 21M.  Both 386F and 255F had litters in the spring, but none of the pups survived.  Neither female has been seen in a long while and both are assumed dead.  The Leopold Pack has split in two.  It was 21 wolves in spring and summer when eight wolves dispersed to form a new pack now named the Hellroaring Pack.  February, mating season, is going to be very interesting this year.

I hike around the Mammoth terraces in brilliant sunshine and along the Gardiner River.  Everything looks so pure.  The trail is packed down to a certain point and easy to negotiate.  Fourteen degrees doesn’t feel so bad.  My Sorrel boots are holding out pretty well and the foot warmers are saving my toes.  I don’t see any wildlife except for ravens and a Clark’s nutcracker.  When the trail finally disappears, I hike in almost foot deep snow.  At the Boiling River a few people soak in the hot springs and I wish I had brought my bathing suit.

I leave Mammoth a little after 3 and stop at the Children’s Firewalk to see if I can find the Leopold Pack.  I hike up the service road to the barricade, again in foot-deep snow.  The temperature, 11 degrees when I leave Mammoth, is dropping and an icy wind in picking up.  A couple of young women sitting in the truck bed of a government vehicle are looking at something through spotting scopes.  I scan the snow covered landscape and spot six dots.  Wolves bedded down.  The Leopolds.

Rick McIntyre is already parked near my jeep and I grab my spotting scope.  I see five Leopolds cavorting in the snow, two black and three gray.  The icy wind burns my face so I run to the car and pull on my face mask.  It looks awful, but it saves my skin.  I am so excited to see wolves loping through snow 1-2 feet deep, but I can’t bear the cold any longer, so I watch only a few more minutes and fold up the scope and tripod and head back.  The sun is going down and by 5:05 p.m. it’s dark; by 5:30 p.m. pitch black.  I stop for a bison in the middle of the road and wait, rolling down the window to hear its comforting snorts.  The rest of the way to Silvergate is a silent drive under a thin crescent moon with Venus shining brightly alongside.

On Monday morning more new snow has fallen, the dry, fluffy snow that doesn’t stick.  I have beaten the snowplow to the road and take a walk toward the Park to look for moose.  The world is truly beautiful at this moment.  Soda Butte Creek winds through pine trees, their branches bending from the weight of snow and ice.  The morning is silent – not even the sound of a bird.  What a beautiful place to wake up.

Back at the cabin I see Holly with her two golden retrievers bounding through the snow.  I hear the dogs barking and peek through the trees to see if there’s a moose or a coyote, but I can’t even see the dogs.  I hate to leave.  I would just like to stay here and live at the edge of winter at least one more day.

The drive through the Park is slow.  Snow blows into the windshield and off the road.  It dusts the pavement and flies up into the air.  Close to Round Prairie I startle five bull elk who bound across the road into the meadow.  They lift their long legs high and remind me of reindeer.  A coyote trots down the road and past the car.  By the time I reach Lamar Valley the snow stops.

Bison graze in the meadows and amble down the middle of the road.  I meet a few coming towards me and stop the car, waiting for them to jump off the road.  Grass and sage peek through the snow.  It is not so cold here in the valley and the snow is not so deep.

The Slough Creek Pack is bedded down on a hillside in Little America not far from their den site.  They made another kill last night.  Laurie tells me an unfortunate coyote tried to scavenge some food and the wolves killed it.  I’m glad I wasn’t there to see it.

The rest of the drive to Mammoth is quiet, peaceful, white.  I pass the Children’s Firewalk and say goodbye to the Leopolds in my mind.   These wolves – the Leopolds and the Sloughs – do not come close to the road.  They make their kills farther in and try to avoid people.  The wolf population is down in the northern part of the Park partly due to poor pup survival this year.  I missed seeing the Druids and the Agate Pack, whose territory lies in the Antelope Creek Area.  That part of Yellowstone remains secluded, cut off from traffic when the Tower Road closes in October.  That seems to prevent conflicts with humans or other wolf packs,, a good thing for the Agates.  They frequently venture down to Tower Junction, but I will have to wait, probably until next spring to see them again.

Leaving the Park I pass ranches stretched out for miles, horses out in pastures, manes blowing in the snow and wind.  Crossing Bozeman Pass is a nightmare with trucks speeding by, blowing snow everywhere.  There are times I can barely see.  At one point I actually stop because the windshield is completely covered in snow.  When I finally reach Bozeman I pull into a parking lot and catch my breath, trying to remember what this morning was like when I was still at the edge of winter.