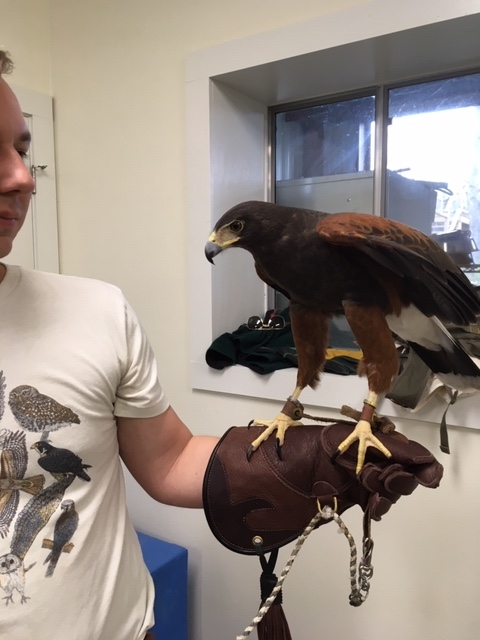 Austin Wildlife Rescue held its open house today, almost a year from opening their new facility in Elgin in March 2019.  The buildings are simple rectangles that look like warehouses.  Just outside the entrance are two enclosures bordered by concrete blocks and lined with gravel.  Plants are strategically placed in one, while the opposite side is Tito the tortoise’s home.  Tito is a suculata tortoise, big and slow.  Suculata tortoises come from central Africa and are not native to Texas, though they are among the most bred tortoises and the third largest species of tortoise in the world.  It is likely that Tito was someone’s pet, despite the fact that their long life span – 75 years – makes them less than ideal pets.  They are docile and pleasant, but require hot temperatures to stay healthy.

Inside Austin Wildlife’s main building is a series of square rooms:  One for incubators, one for surgeries and medical procedures and another room where Tito, a screech owl and a Harris hawk are visiting with guests.  When I pet Tito’s head, he immediately draws back into his shell.  When his head emerges again, I stroke his rough skin and he seems to enjoy it. 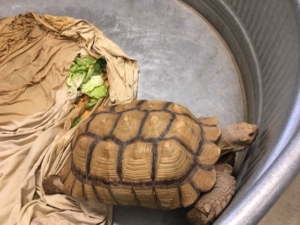 The Harris hawk, a female, sits on the gloved hand of her handler.  She is a deep chocolate brown with splashes of chestnut on her feathers.  Her legs are rusty brown also, stretching to white feet marked by black tips.  She is remarkably social, if a bit nervous, and doesn’t seem to mind the crowd of people edging toward her.  Injured at some point, her wings have been clipped though it’s not noticeable.  She cannot fly, but she is beautiful, her feathers sleek and shiny.  Someone steps closer and she hops up off the handler’s glove.

Surrounding the main building are large cages for raptors, squirrels, raccoons, and one bobcat, most of the cages empty now.  On their chain link walls hang pairs of blue jeans, knotted at the ends of the legs, the comfort zones of animals.  Passing one cage, a young raccoon peers out over a zipped waistband, his black and white mask highlighting his dark eyes.

The raptor rehabilitation building is a 100 ft. x 20 ft. x 20 ft. warehouse type structure where birds like owls and even eagles are exercised after an injury.  Austin Wildlife Rescue only releases animals back into the wild if they are able to fend for themselves, which means hunt and find food and this is the space where raptors can try out their skills.  The only problem is recapturing birds who perch on the rafters or the beams in the ceiling.

When I look at Tito, Cheyenne, and the Harris hawk, I marvel at the care and dedication Austin Wildlife Rescue has put into their recovery and feel so fortunate to be this close.  They are creatures of beauty.  The hawk swivels her head, totally aware of everything around her.