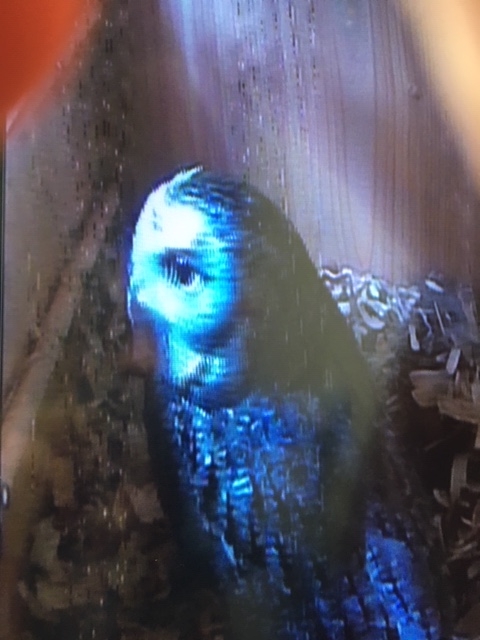 There is something different about the owl.  On Wednesday, instead of sitting tall and upright in a corner of the box the owl was bent over, tearing at something along the edge of the box.  This is the first time the owl has brought food into the box.  Even its face looked different, slightly flatter, its eyes wider.  The owl rotated its head, peering around the box as if surveying its surroundings for the first time.

Around 6 p.m. the owl became restless, shifting its weight and eyeing the entrance where the last of the day’s light streamed through.  Suddenly it sprang to the entrance and perched, its head protruding outside.  The owl stared toward me as I watched through the window.  With the owl’s face outside the box and its tail inside, its feathers appeared darker with lighter colored bands.  In the evening darkness the owl was more difficult to see, but there was still enough light to catch the owl’s graceful swoop down into the yard away from the box.

The next day the owl again became restless in late afternoon, shuffling the sawdust with its beak and tail feathers, making a bed or well to sit in.  Nesting behavior.  When the owl hopped into the entrance, I opened the back door to listen for trilling, but couldn’t hear anything beyond the distant hum of traffic.  The owl flew off, but minutes later an owl appeared and sat on the perch.  It waited a minute before flying off in the same direction.  It seems that the female screech owl has moved into the box.

On Friday night, the owl followed the same schedule, perching in the entrance around 6:30 p.m. and taking off at 6:48 p.m.  Again, she returned to the box about two minutes later and waited briefly before taking off.  About ten minutes after that an owl hopped into the box, looked around, and left.  It’s possible that the owl returning to the box is the male screech owl checking the nest to see if any eggs have been laid.  Once the eggs are laid the male will bear the burden of feeding the female, though she will leave the box for short periods of time.  Last night the owl’s behavior was much the same, but we did not see an owl return to the box.

Typically, the female screech owl will occupy the box for a few days alone before laying eggs.  I watch her carefully now as she sits in the box on this breezy day, rocking back and forth gently.  She is waiting too.