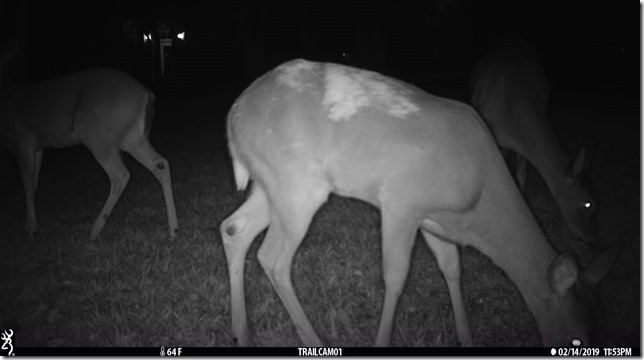 Winter comes and goes.  The first week of February began with warm mornings in the low 50s, creeping up to high 60s.  While the rest of the country faced below freezing temperatures and snowstorms, Central Texas basked in moderate winter weather under cloudy skies.  I envied a friend of mine when she told me that it was snowing in Washington.  Then rain came – again – and brought real February weather.  On Friday morning tiny grains of hail called graupel pounded the streets, lawns and frozen birdbaths.  Graupel are soft pellets of ice created when supercooled water droplets coat a snowflake.  Austin usually has one good (but light) snowfall each year, at least enough to cover trees and rooftops and make everything look pristine for a few hours.  For a short while we can feel like we live farther north in a place with four seasons.

Several deer visit our yard each night.  There is a buck we call Scruffy who always travels with a small doe and likes to graze along Sierra Leon and Q Ranch Road.  Scruffy has one antler that is longer and sticks out.  The doe has a very sweet, gentle countenance with large soft eyes.  She is wary of me when I walk by with Daisy while Scruffy seems ambivalent to our presence.  It’s seems unusual for a buck and a doe to travel together consistently and we wonder about their relationship.  Are they a pair?  Siblings?

Most of the deer in this area travel together in groups of does or bucks.  There is a group of six does who hang out near Harrogate and Bunting, and a doe with a fawn who follows them.  A creek runs parallel between Danwood and Harrogate through a wooded area where the deer gather for water. I have seen some territorial behavior between the two groups, the doe with the fawn hesitating to graze near the larger group.  I’ve also seen two does rear up on hind legs pawing each other.

Yesterday afternoon a group of does was traveling down Sierra Leon with an unusual doe; she has a white patch of fur across the middle of her back.  The first time I saw her I thought I was seeing things, but when you get close enough, her fur is white and looks like a large white feather painted on her back.  An interesting mutation. 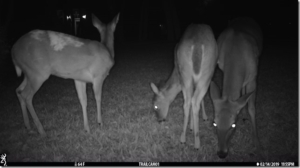 The cold, damp weather has made some of the horses at Scattered Oaks frisky.  Yesterday, two bays and a chestnut, all blanketed, raced each other along the ribbon fence dividing their turnout.  They stormed out into their pasture, hind legs kicking up in the air, manes flying.  Willis looked out from his shelter, contented to be next to TJ who sported a new heavy blanket.  Guilt flooded over me and I wished I’d come out on Friday afternoon to put Willis’ blanket on.  But Willis seemed just fine with his thick gray coat.  The temperature is supposed to reach 50º today.  He will be all right.