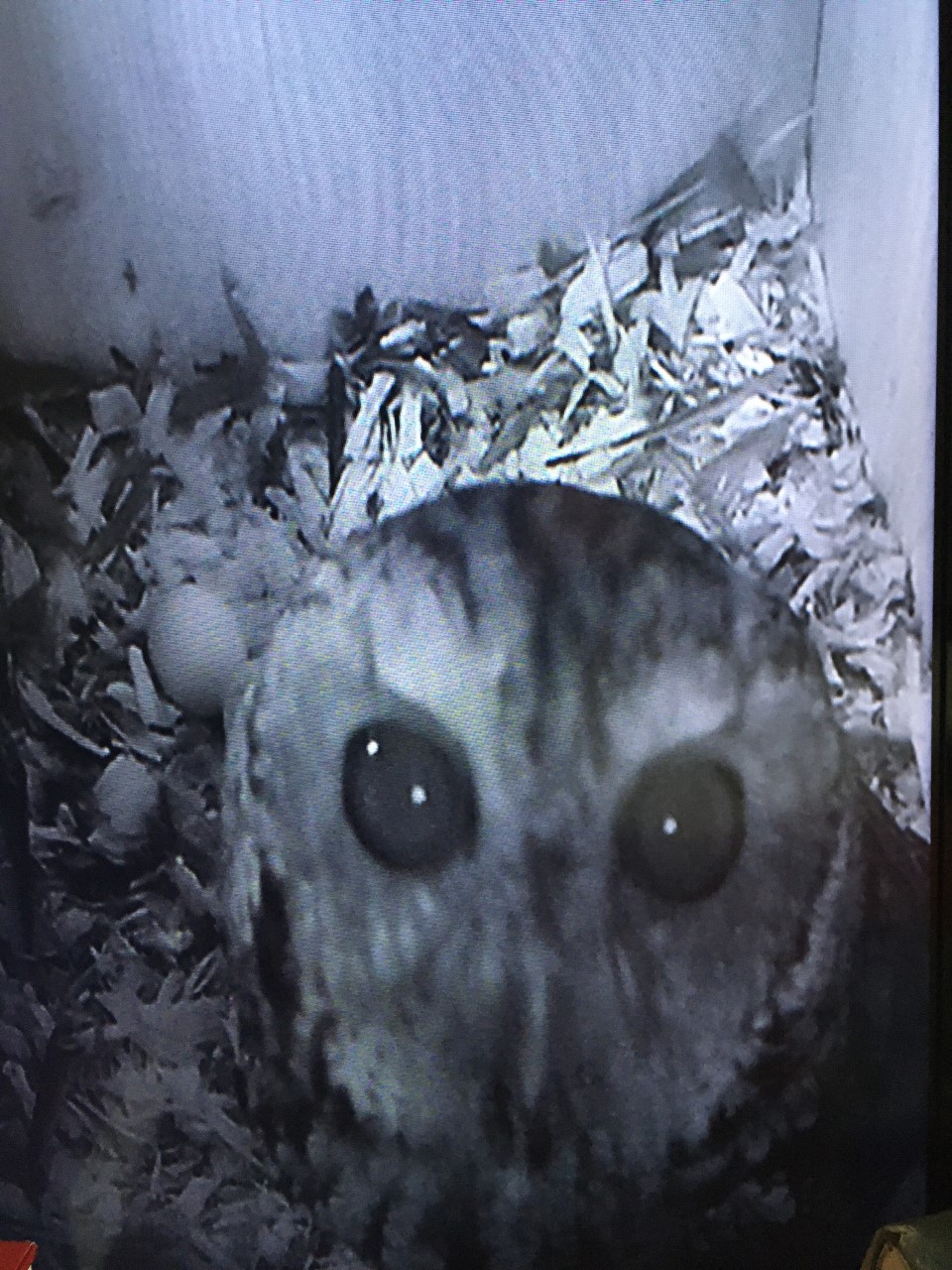 Mm. Owl surprised us on Tuesday (March 23) by laying a fifth egg.  She stayed in the box that evening and, for the first time, we saw Mr. Owl visit the box and feed her.  Number four arrived on Friday, the 19th, and we were sure it was the final addition to the clutch.  The sequence of eggs has been two days between eggs one and two, one day between the second and third, and third and fourth.  The fifth egg was laid four days after the fourth egg – or three days apart.  Unless we missed it, but that is unlikely as we watch her daily.  She leaves the box for a short time each evening so it would be hard to miss an additional egg.  It will be interesting to see if all the eggs hatch and in what order.  In the past “our” screech owls have laid as many as five eggs, but only four hatched and four owlets fledged. 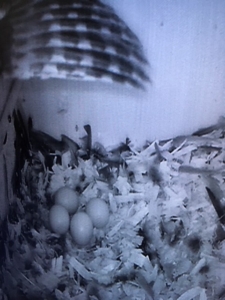 She is a very pretty little owl, her gray and white barred wings spread over her clutch, and seems to be a devoted mother.  Last night Mr. Owl appeared at the entrance, a gecko dangling from his beak, an offering for her.  But she had just left the box!  Perhaps she was hungry and tired of waiting.  He looked around, his head swiveling back and forth, and dropped to the sawdust floor.  He looked frustrated, confused.  “Where is she?  I brought dinner and she’s not here.”  He didn’t pay much attention to his future brood, just looked the eggs over briefly before hopping up to the entrance and out of the box. 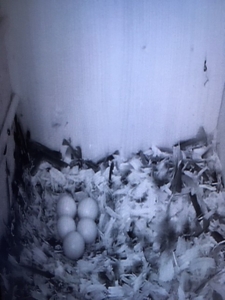 March has calmed down with fewer gusty days, though morning temperatures remain cool.  Bluebonnets are starting to bloom along Blake Manor and some of the turnouts at the barn.  Trees are leafing out and flowering – Bradford pears, cedar elms, oaks.  Plants that seemed to freeze are reviving:  lirope, salvia.  Unfortunately the loquats we planted last year look beaten down: the brown leaves are drooping ovals, but it’s still too early to cut them back.  After the carnage of the winter storm in February, this time requires a lot of patience not to cut everything back to nothing.

Last Sunday I emptied our bird feeders and cleaned them, spraying the inside with bleach and water.  There’s been an outbreak of salmonella among the birds, apparently brought by pine siskins migrating through.  We spotted one at our feeders and pond along with a chipping sparrow.  A cedar waxwing has also been visiting, stopping for a drink at the birdbath.  Because the disease is deadly to birds, we removed the feeders and waited to fill them with fresh seed and put them up.  I’ve added only a little seed to keep the birds happy.  Not sure if it’s enough to keep the disease away, but if we limit the amount of seed and keep cleaning the feeders the birds should be all right.