Mme. Owl fidgets in the box, softly clucking to the hatchlings.  Hidden under her broad, gray wings the tiny owlets chirp, making a sound somewhere between a cheep and a whistle.  Now they are quiet; they must be sleeping.  The first owlet hatched on Monday, April 12, one month from the day the first egg was laid.  Two more owlets appeared the next day, leaving two eggs unhatched.  On Wednesday, April 14, two eggs were still unhatched with three owlets.  Last night only one egg remained, so four have hatched.  The owlets are tiny, fuzzy balls of light gray, almost white feathers; shapeless until they stretch their wings.  They are strange little creatures without a solid bone structure, wobbling about and falling together in a huddle. 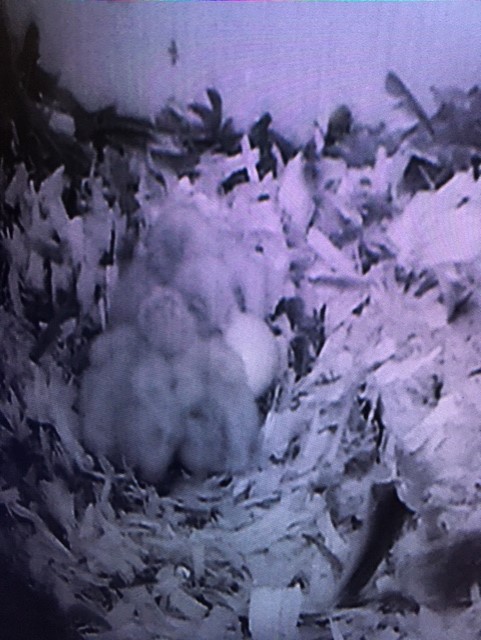 Mme. Owl attends to them constantly, shifting her body to shield them; chattering, “singing” to them.  In the first warm days of April I felt sorry for her as she dutifully covered her eggs in a nest that must have felt too hot for comfort.  She stared up into the entrance, panting, an expression of longing on her face, to roost on a branch of an oak tree for a short while.

She leaves the box each evening after dark for a short while to get water, maybe something to eat.  The owlets, left alone, huddle together in one fuzzy ball.  Sometimes they chirp, but mostly they are quiet, waiting for their mother.  When she returns there is always a flurry of excitement as Mme. Owl settles over them, bending down to feed them bits of food she has brought back.

Mr. Owl visits several times each evening.  When the first owlet hatched, he dropped to the floor of the box and stayed a couple of minutes, as Mme. Owl presented his progeny.  “See – Jr. has arrived.”  He brings food each night for his mate and the owlets:  a bug, a gecko, a worm.  The nest is littered with feathers and remains of small birds.  He has been a good provider.

On Tuesday we noticed Mr. Owl perched in one of the trees near the side fence, in the same fork where he roosted during the day last year.  A pair of chickadees has been guarding a nest in a little bird house nearby and fussed at him.  After that we couldn’t find hm; he must have found a different perch, but he must be there somewhere.