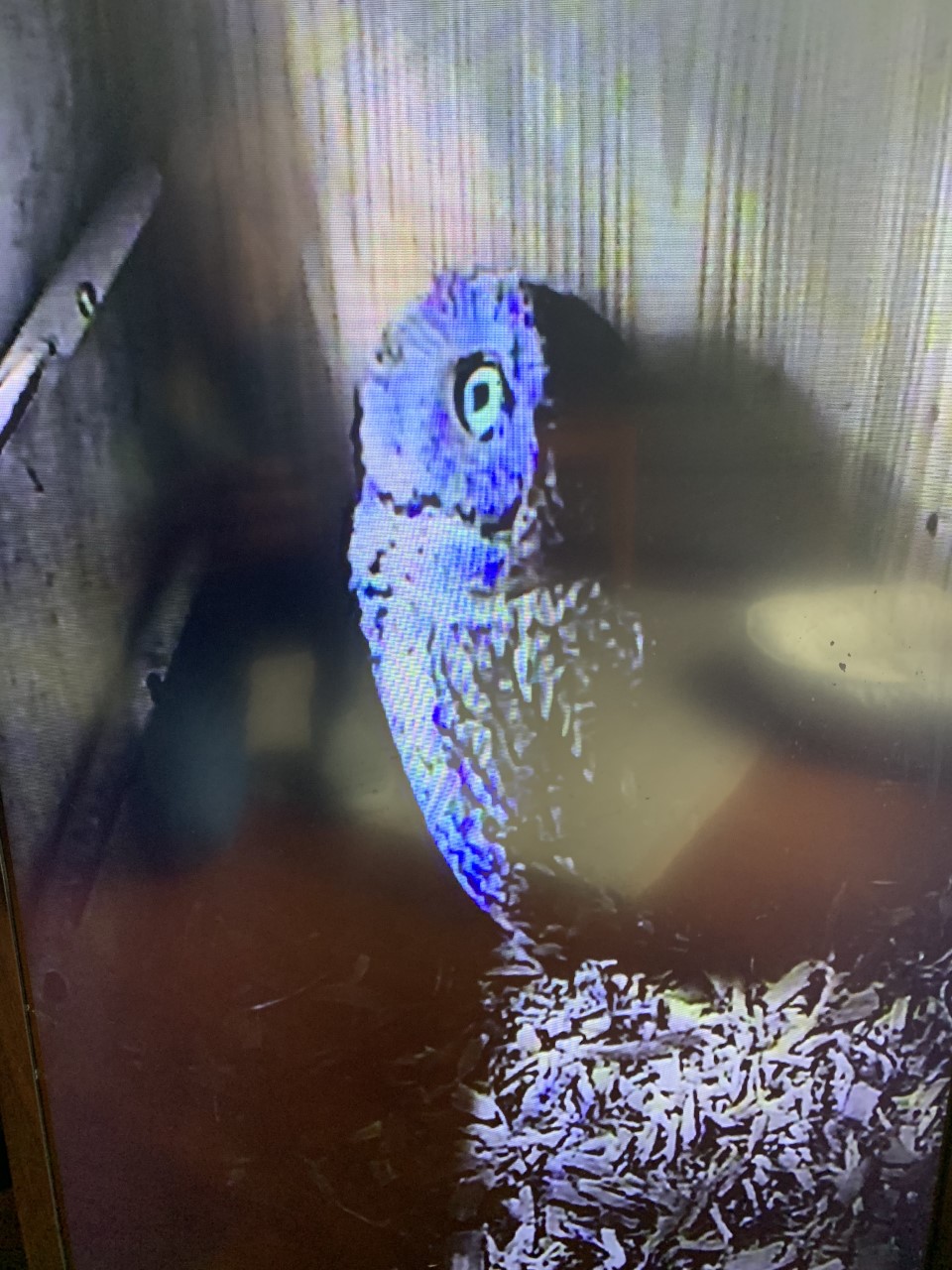 The last days of February are cold and wet; the temperature hovering around freezing for days.  Winter is still here, icing over birdbaths and deer water, glazing windshields and walkways.  Wednesday morning was 34, then 31; cloudy and damp.  I walked dogs at the shelter and some of them shivered in the cold.  That morning Daisy and I walked down the trail, hoping to see one of the red shouldered hawks, but the woods were quiet.  The world is mostly gray or brown now, bare branches of trees stretching to the sky, a few flowers budding at the tip of long, graceful leaves.  We get so little winter that this brief period of hibernation is a welcome time to step back, slow down.

The owl huddles in the corner of the box.  He perches in the entrance in late afternoon or the middle of the day if it’s warm.  The past few days he has left the box somewhere between 6:30 and 6:45 p.m.; shooting out of the box and swooping down, he flies over the fence toward the greenbelt.  A couple of days passed when he wasn’t in the box, but they were only isolated episodes.  The female should be arriving soon, so if he is gone for more than a few days in a row, her arrival may be imminent.

The owl was not in the box this morning.  Over the past week there have been changes in behavior and I swore the owl in the box looked different last Saturday, March 5.  It stared out the entrance, wide-eyed, like it was in a new place.  My first thought was this is the female.

Throughout the week I looked for new behaviors.  On Tuesday the owl sat in the entrance and trilled before taking off – that was new.  The following nights the owl left at 6:54 or 6:55 p.m.,  always trilling first.  Friday night, after leaving the box, the owl returned to the box two times, scuffing the floor of the box like it was looking for something – or someone.  It seemed like the female had finally arrived and was setting up housekeeping while the male kept watch and attended her.

I stare out the kitchen window watching cardinals sitting in the bird feeder while wrens peck at the ground underneath.  These are the last days of winter; chilly, windy days with temperatures rising and then falling in a matter of hours.  The owl is not in the box again this morning.  Maybe it wasn’t the female we saw last week after all.  Maybe this is the time the male leaves before the female moves in.  Maybe the female is not ready to lay eggs yet, though last year the first egg was laid on March 12.  I watch every day, waiting, wondering what happened.  It may seem like the owls are late this year, but they are just a little later than last year; in past years, in other owl boxes, screech owls begagn nesting as late as April.

The front is coming in.  Branches of live oaks sway back and forth, their leaves scattering everywhere.  It’s still warm at 7:00 p.m., 72º, but who knows what tomorrow will be like with violent thunder storms predicted.  This is the first day of spring and I wasn’t ready for it, clinging to winter as I usually do.

It has been a week and a day since we saw the owls.  The last time was Saturday, March 12.  The night before the owl left the box and then an owl returned, left the box and came back again as if it was looking for someone.  We thought it was the male looking for the female, and I felt sure it was the female in the box on Saturday, March 5.  The owl looked different; acted different; scratching the floor of the box, burrowing down into the sawdust.  She always trilled before leaving the box, another different behavior.

I’ve looked back over last year’s journal and couldn’t find a record of the male leaving for a period of time as male screech owls typically do when the female’s arrival is near, but I know there were days when he left the box.  This is different.  It’s possible mating was unsuccessful this year – screech owls do not produce a clutch every year.  Tim and I both remember years when there were no owlets, or the clutch didn’t survive.  If theI remember one pair huddled in the waxleaf ligustrums staring at the owl box, as if by some magic owlets would appear in the entrance.  Waiting.   Could the screech owls be nesting somewhere else?  Unlikely, given they have nested in this box for the past two years.

So, sadly, this year’s screech owl chronicles ended almost before it began.  My disappointment runs deep.  Every fall we look forward to the male’s first appearance in the owl box entrance, and then in spring, the female’s arrival, nesting, and raising owlets.  This year it just didn’t happen.  I have to remind myself that nature is always in control and screech owls go through cycles of life just as we do.  Next year will be different. 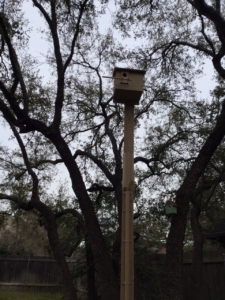