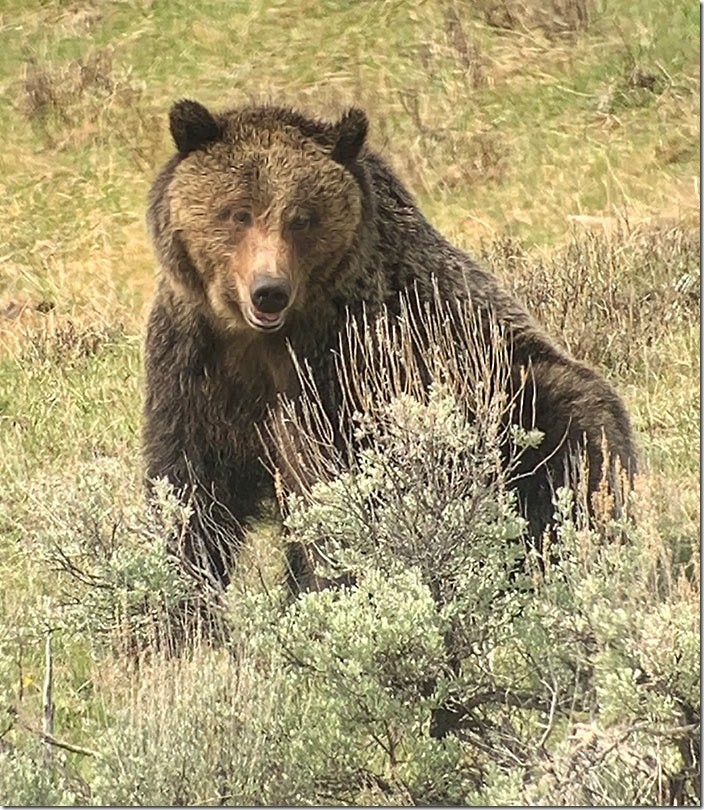 A cold, wet spring day.  Driving I-90 toward Yellowstone we pass pastures greening up with new grass and mountains dusted with snow.  Elk fill the valleys – there are so many of them!  Gray clouds cover the sky with intermittent rain showers breaking through, but the elk and horses and sheep are not disturbed from their grazing.  It’s been a few years since we visited the Park in May and it’s good to be back when it’s cold; the wildlife is out and there aren’t so many people.  It just feels wilder.

Winding through the Park we stop at Blacktail Pond to scan the hillsides; wolves have been seen feeding on a carcass near the pond.  Further down the road, a coyote hurries away from the remains of another carcass, now taken over by ravens.  In Little America, a beautiful grizzly forages in the grass and sage and then settles in for a nap.  Pronghorn and bison scatter in the meadows and along the hillsides.  Down the road, at the Crystal Creek trailhead, a group of visitors point their scopes toward Specimen Ridge where a black wolf is sitting below a dead tree – then chasing a pronghorn, then weaving between the bison on the grassy slopes.  There is a wolf den here.  The wolf knows it is being watched, but goes about its business – finding food.  I do not know who this wolf is, but suspect it’s one of the Junction Butte Pack that is also denning north of the road.  The wolf slips in and out of view behind dips and rises in the landscape.  We get a better view at another turnout, but then move on.

Another grizzly is foraging across from Coyote Pullout, not far from Secret Passage, while elk graze peacefully on the slopes above him.  Secret Passage refers to a hidden path often used by wolves to travel from Little America to Lamar Valley.  The temperature is falling, 54º to 47º to 44º.  With the icy rain, it is bitter cold and we head toward the cabin.  It was an auspicious beginning to this trip and hopefully an omen that we’ll see lots of wildlife.