The days are inching toward spring when we have barely experienced winter.  Did the temperature ever go below freezing and stay there?  A few nights the temperature plunged to 27º, but quickly rose to the 30s.  It was usually raining or damp those days, making it feel much colder than it was.

The owl huddles over her clutch this morning.  She has laid three eggs so far and there may be a fourth egg hiding under her now.  The first egg appeared on Tuesday morning, March 10, and each subsequent egg has been laid a day apart; so Thursday, Saturday and today, if she has laid another.  Tuesday through Saturday she left the box shortly before 8:00 p.m. and did not return before midnight.  Last night, however, she returned to the box after short intervals of 30 minutes to an hour and was still in the box at 11:00 p.m., so her breaks to get food and water are getting shorter as the clutch grows.   She seems content, her eyes closed, gently breathing.  Every now and then she changes position, lifting a wing to groom her dark gray feathers, layered on top of each other in a beautiful fan pattern.  A few dark fuzzy feathers are scattered about, evidence of prey brought in and cached. 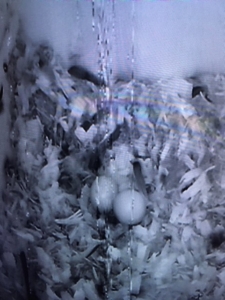 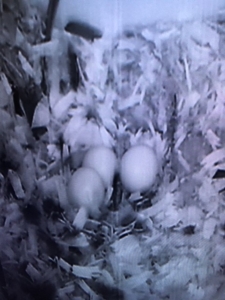 The oak trees are leafing out releasing an explosion of pollen into the air.  Fruit trees are budding, bright pink blossoms filling their canopies.  The redbuds are particularly brilliant, lines of deep lavender stretching along each slender branch. When Daisy and I walked yesterday, six bucks were bedded in the thick woods along the road, almost hidden in the trees.  It looked like at least one had lost his antlers.  Farther down Danwood and across Oak Knoll a group of six does grazed in front yards.  Wary of us – and two young boys passing on bikes, the deer stopped grazing, lifting their heads to watch us, making sure we went on our way before foraging again.   I love walking in the cool and quiet of a late Sunday afternoon with only a few others out with their dogs or toddlers trying to get some outdoor exercise, trying to escape the restrictions of Covid-19, the real dark cloud that has descended upon us.