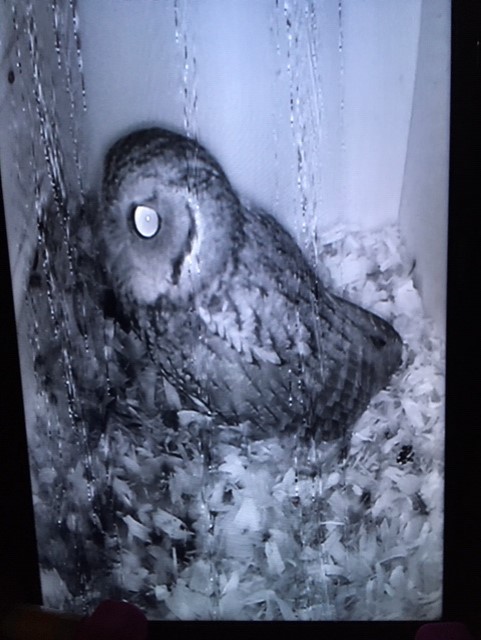 An eastern phoebe visited our backyard this morning, perching briefly on the shepherd’s hook and staring at me for seconds before flying off.  “That is not a titmouse” I thought as it flew off before I could get a closer look.  Its dark gray head minus a crest confirmed the difference.  Eastern phoebes are quite common in this area; I know I have seen them before; I just wasn’t sure what they were.  About the size of a sparrow with dark gray backs and heads, and light breasts, they look a little like swallows.  They inhabit woodlands, farms, and towns, eating insects.

The female screech owl has been in the owl box for over a week now.  I was convinced it was the female when she began trilling before she left the box each evening.  Each night she leaves a little later.  Last night shortly before 7 a second owl (probably the male) dropped into the box, so we know now there are two owls, that this is a pair, and the female is now in the box.  Instead of names we have given them numbers like wolves:  M20 and F20, “20” for the year.  Waiting for the first egg begins.  During the day the female sits in the box, sometimes curled in a ball, at other times rocking gently back and forth.

We received ¾ inch of rain in the middle of the week.  On a damp morning I stopped to watch a herd of deer gathered near the creek.  Some were bedded while others grazed in between the trees or at the creek’s edge.  Miss White, the piebald doe, was there; I counted 12 does and yearlings and two bucks, but there could easily have been one or two more.  They seemed so content, though very wary of our presence.   I squatted down to hold Daisy who lunged at them and just watched for several minutes.  One curious doe slowly approached the wrought iron fence until she was about three feet away.  I could see whitish spots on her shiny brown nose, her large deep brown eyes, the long petal-shaped ears.

Today is cool and breezy, a typical March day in Texas.  Signs of spring are everywhere – redbuds are finally in bloom, the first bluebonnets are beginning to pop up, and there is Indian Paintbrush in the fields surrounding the barn and along Blake Manor Road.  The live oaks are dropping their leaves as the fruit trees and Bradford pears are flowering.  We are getting ready to plant some vegetables in pots and see how that goes.