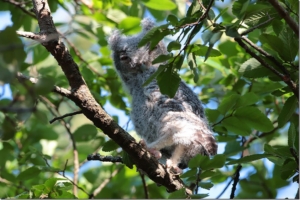 We woke to an empty owl box on Friday morning.  Two owlets took off on Wednesday evening, the first at 8:40 p.m., the second at 9:03, leaving the other two owlets to follow, but they lingered in the box, shuffling the sawdust, hopping up to the entrance, squawking for their parents to bring food.  On Thursday morning only one owlet remained in the box, his sibling having left in the middle of the night.  He fluttered around the box, chirping, crying, gazing up at the entrance.  He seemed quite upset, not sure where everyone went.  Gradually the owlet settled down, perhaps enjoying the enlarged space.  Climbing the horizontal rungs to the entrance, he peeped out, turning his head to look around.  What does an owlet think when looking out at the world outside their nest for the first time?  He dropped down into the box and stayed that evening while his parents brought him moths and lizards.  We waited, watching until midnight as his parents flew back and forth to the nest, or fed him as he waited in the entrance.  The next morning he was gone.  The box was empty. 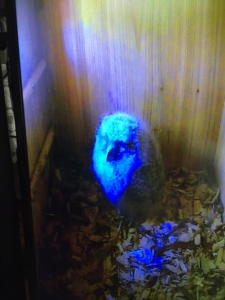 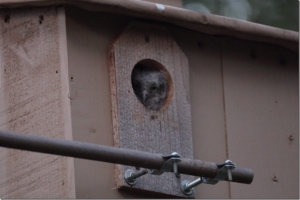 Last weekend the female screech owl began leaving the box and staying out during the day, roosting in the oak trees not far from her mate.  She perched on a high branch while he nestled into the fork of a tree a few feet below her.  There they sat for hours in the heat of the day.  The male seemed relaxed, content, his eyes closed; undisturbed if we went back and forth in the yard.  In contrast, she watched us nervously as we went about our yard work; her ears perked up, her body stretched tall.  We learned to tell them apart in this way.  He would sit in the tree while she stayed with the owlets in the box.  He was always in the same place giving us the chance to note their individual markings.  He has a white triangular blaze on is breast and deep gray vertical markings on either side.  She also has dark gray “stripes” on her breast, but they run diagonally from the center.  He seems more comfortable around us, but he has been here since the middle of October. 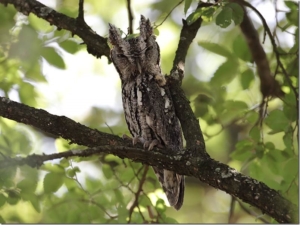 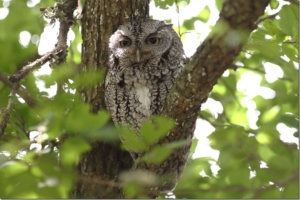 By Wednesday evening the owlets were becoming quite restless, flapping their now-broad wings, and jumping up to the entrance.  They pushed each other aside to climb to the owl box hole.  The lucky owlet would sit there waiting for a food delivery.  It was easy to tell when dinner arrived, the owlet shaking with excitement and falling back into the box.

When the owlets finally fledged, they just left.  They perched in the entrance and then disappeared.  By that time it was too dark to see them fly off.  In past years, in other clutches, the owlets peeked out of the entrance during the day and sometimes walked along the perch days before fledging.  These owlets just left.  They were ready to go and flew under the cover of darkness.

On Thursday morning we searched the trees behind the owl box and along the fence, looking for the owls. The male was still in his usual spot, dozing comfortably so we knew the owlets and female would be nearby.  The trees are thick with leaves and slender branches, easily obscuring even the largest bird.  After much neck craning, we found the female perched on a high branch about a foot away from an owlet.  Her gray feathers blend in easily with the branches of the trees and trunk, while the owlets’ fuzzy light gray feathers make them a little easier to distinguish.  Still, they were very hard to find.  The other two owlets were huddled together on a branch – it looked like they were on top of each other.  They stared down at us looking up at them, their eyes wide with what?  Curiosity?  Amazement? 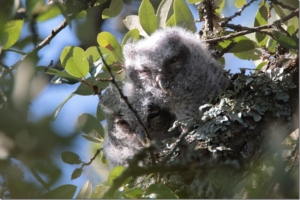 Friday morning was windy and the owl family was even harder to find.  The male was still in the fork of the tree, still dozing, but the female and owlets were tucked far back on branches that stretched out and away over our neighbors’ yard.  When we finally found them, the owlets were a mass of light gray fuzz, swaying back and forth.  Their mother was perched below them, hidden deep in twigs and leaves.  It was impossible to distinguish individual owlets, but they were all there.

It is a strange feeling, staring at the empty box, a combination of satisfaction for seeing a pair of screech owls raise a successful clutch and sadness now that it’s all over.  It’s a special experience we are fortunate to witness and I tried to treasured the scenes that enfolded in front of us.  Mrs. Owl caring for her young – grooming them, feeding them, checking to see who didn’t get fed.  The male owl, the bewildered expression on his face when the owlets mobbed him.  The quiet times in the box, Mrs. Owl rocking gently back and forth, sometimes quietly trilling.  It all went by so quickly.

Yesterday morning all the owls were gone.  We looked up through the branches to the tops of the oak trees, searching for light gray fuzz.  The male was not in his spot, a sure sign the family has moved on.  Where?  The adult pair would fly off each evening, heading south-west toward the meadows and woods along the trail, so that is the family’s likely destination.  And it’s likely they will visit the birdbath in our yard or perch on the shepherds hook holding the bird feeder.  They may even peek into the owl box.  But it will all be in the middle of the night, when we cannot see them.