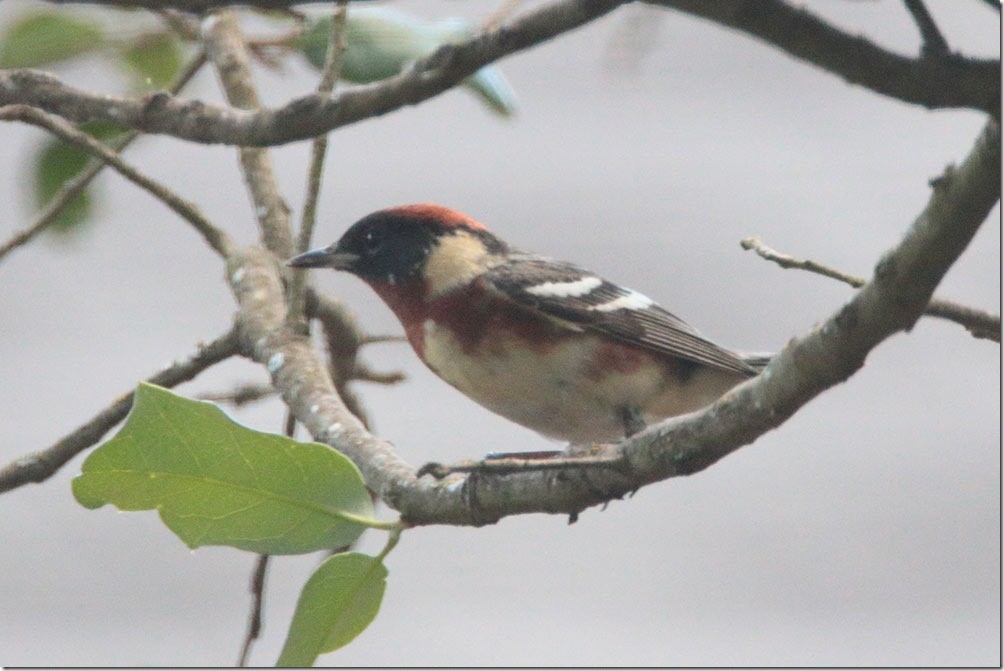 The first week after the screech owls left the box I thought the backyard would seem empty.  Instead, the new pond with its cascading waterfall has brought more bird activity and some unexpected visitors.  The sound of water pouring over rocks into the pool is drawing more chickadees, titmice and cardinals to the feeders and birdbath.  They flutter in between the leaves of thick bushes.  A squirrel, raccoon, or ringtail has emptied the suet feeder which we thought we would have to clean and toss out after sitting there all winter.  The remainder lies crumbled on the ground next to the salvia and begonias and sprinkled on the fence.

The biggest surprise was the appearance of two birds we have never seen (or heard of) before:  a chestnut-sided warbler and a bay breasted warbler.  Both are uncommon in this region, according to Birds of North America, their main habitat being the north and northeast.  However, they are neotropical migrants, meaning they travel to the United States and Canada where they breed before returning to Latin America.  On Thursday they fluttered through the high branches of the oaks and down to the brush along the fence.  At first it looked like the two were the same bird, but photos taken as they darted quickly through the trees revealed the difference.  The bay breasted warbler has a brown chin, throat and sides with buff underparts.  The chestnut-sided warbler has a black throat patch, rich chestnut sides and white underparts – the only North American Warbler with pure white underparts in all seasons.  The two birds flitted around together, probably migrant warblers traveling together.  Insect eaters, they busily pecked along the trunks and branches of our trees. 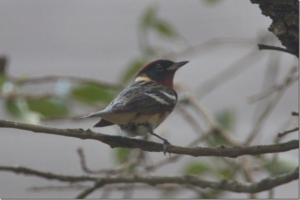 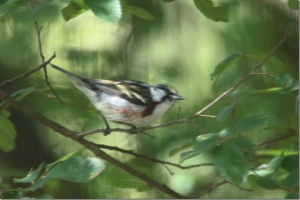 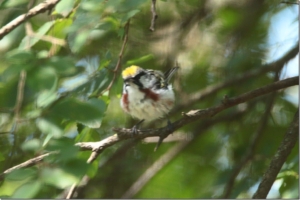 The eastern phoebe is now a regular visitor to our yard.  It swoops over the pond, soaring close to the water and perches in the Yaupon holly near the pond.  Today it flew down to the pond over and over, slapping the water with its wings, then soared up into the bushes. 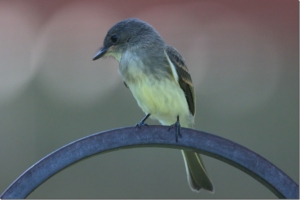 Young titmice and cardinals, tiny replicas of their parents, grab seeds from the sunflower feeder and drink at the birdbath.  I was standing only a few feet away from the birdbath when a young titmouse landed.  He saw me, drank and flew up into the trees, undisturbed by my presence.  So the yard is hardly empty.