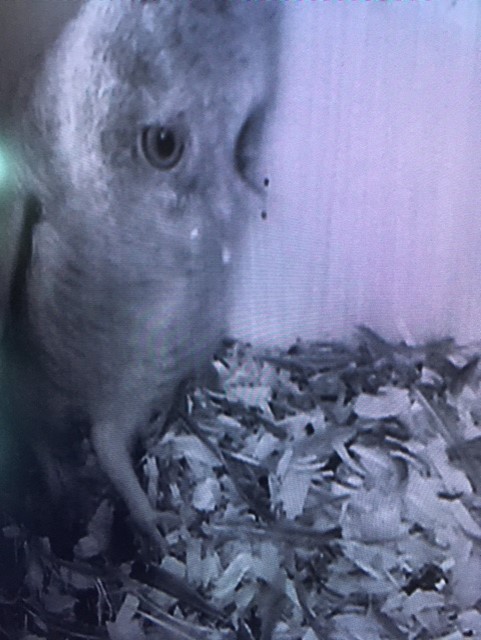 There is only one owlet left in the box.  The fourth owlet left on May 12, several days ago, shooting out of the box suddenly like its siblings.  There is always one owlet that hatches last, that is the last to leave the nest.  “Born late,” it took him a little while to catch up to the others in size, but now he stretches his body up toward the sun streaming through the entrance.  He is almost ready to go.

During the day, he hovers in a corner of the box, staring at the entrance or sleeping.  Sometimes he folds himself over and burrows into the sawdust.  When it poured this morning and early afternoon, he gazed at the ceiling with a quizzical expression.  What is that noise?  He has heard the sound of rain before, but doesn’t know what it means.

The past two days he has learned to climb up to the entrance, grasping the long notches on the box wall, a ladder of sorts, and looked out into the world.  This is where his parents bring him food.  It’s still an awkward move for him and he slips down clumsily to the floor of the box.  This afternoon he peeked out of the box after the rain; when he saw Tim, he quickly retreated.

He has been alone in the box for five days now.  I wonder if he’s lonely, misses his siblings, is confused.  During the day he is quiet, but as darkness falls, he begins to call out.  Last night he waited in the box.  Still.  Silent.  He didn’t seem distressed by his aloneness.  Suddenly a parent appeared and dropped off some food.  He was not forgotten!  With four other mouths to feed, I wondered if the the adults might be frustrated by a straggler.  But no. – the feedings ramped up after 11:30 p.m., and he was well fed with a lizard and other tidbits.

At this moment he is doing the owl dance; rotating his head in a circle.  He is ready to go.  Outside, somewhere in the trees, the rest of his family is waiting for him. 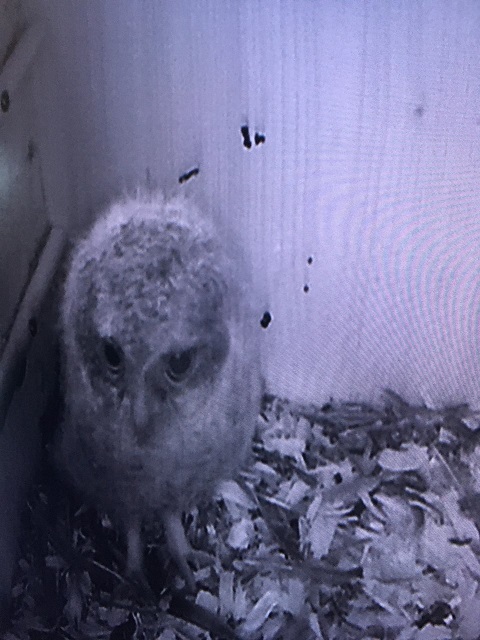 The last owlet fledged tonight sometime around 8:45 p.m.  Like the others, he suddenly flew into the night and disappeared.  That space, the time that begins after the last owlet leaves, is a long blur of empty for us.  Once the owlets fledge, we rarely see them unless we are lucky to catch them at first light at the birdbath or swooping through the yard as evening shadows fall.  Maybe we will see them in the neighborhood one evening as we walk Daisy.  Hear their trills., their whinnies.