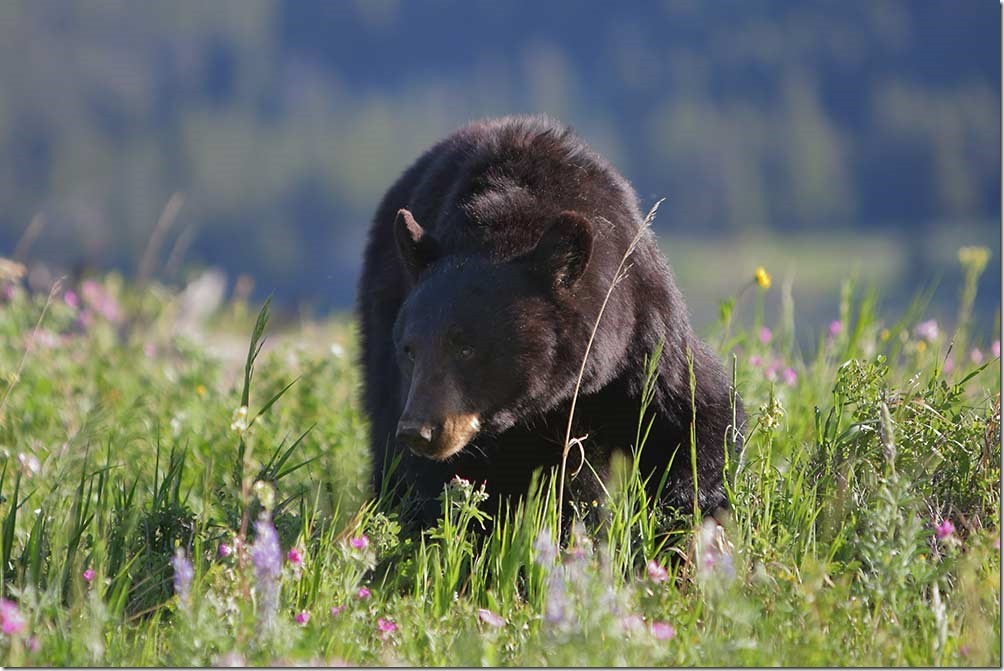 After a year without Yellowstone, we are finally back in the Park.  I want to sink into the mountains, trees and rivers, Yellowstone Lake, all the wildlife.  I am so glad just to be here there is nothing that could make this a bad trip.  As I write this I am sitting near the banks of Soda Butte Creek, watching Tim throw a line into the water.  It is cool here, clouds shielding me from the sun’s strongest rays.  Jagged mountain peaks rise up over the rushing water; patches of snow fill rocky crevices.

The Junction Butte Pack and their eight pups are still at the Slough Creek den site.  The pups grow bigger each day, exploring the fields and slopes around the den under the watchful eye of a few adults.  This morning the pups followed two gray adults up the hill from the den to a stand of pine trees.  There are five gray pups, who are more a tawny color now, and three black pups.

The pups played in the sage and grass and went back and forth between the den and the trees.  An uncollared black wolf appeared in the flats along Slough Creek carrying a bone in its mouth.  Sitting down to rest every once in a while, the wolf made its way up the slope to the pine trees where all the pups and their babysitters came pouring out.  There was such excitement, all the wolves wagging their tails, jumping on one another.

I used to know at least some of these wolves, but after an entire year lost to the pandemic, I can only guess who we are looking at.  One wolf was definitely 907F who is one of the mothers of the pups.  The other gray was probably a yearling.  The alpha female lost her pups, but she is helping raise these pups.  It was obvious how much all wolves love puppies with five adults taking care of their new little pack members.  I was afraid we would not see these pups, that the pack would move them before we arrived, but it seems like the pack is staying put for the time being.  Now that the pups are older and much bigger, they are easier to see and so much fun to watch as they trot and run about on their little legs.

Other wildlife babies are springing up everywhere.  A pair of sandhill cranes nested in the wetlands at the edge of Junction Butte and is raising two colts.  The colts are already traveling a significant distance from the nesting area, following their parents through the low hills and meadows of Little America.  They are still small and walk with a deliberate gait, a stark resemblance to their prehistoric ancestors.  Their parents are huge with rich red-brown feathers and deep red masks extending across their eyes.  I loved watching the colts stretch out and flutter their wings.

We traveled as far as Floating Island Lake and ran into a black bear jam.  A sow and two cubs of the year were foraging in between the logs and pine trees on the nearby slopes.  We didn’t watch for long because it was so congested, but it was lucky we saw them.  Because Tower Road is closed as far as Canyon until next spring, we won’t see the black bears and cubs that inhabit the Tower Junction Area this year.

We are surprised that the General Store at Roosevelt is closed – which was going to be my emergency coffee stop.  The Roosevelt cabins are not open yet either; they are currently being used for employee housing.  It’s going to make it harder to run in some place to grab a drink or a snack, but at least the gas station at Tower is open.

Everything is a beautiful green and the wildflowers are beginning to bloom in force.  Woodland strawberry, mountain dandelions, larkspur, phlox, arrowhead balsam root and sticky geranium.  A day that began at 47º ended in the 70s with a full day of wildlife and wolf sightings – much better than we expected.  So glad to see the sandhill cranes with their two colts.  The adults have done well keeping them safe.