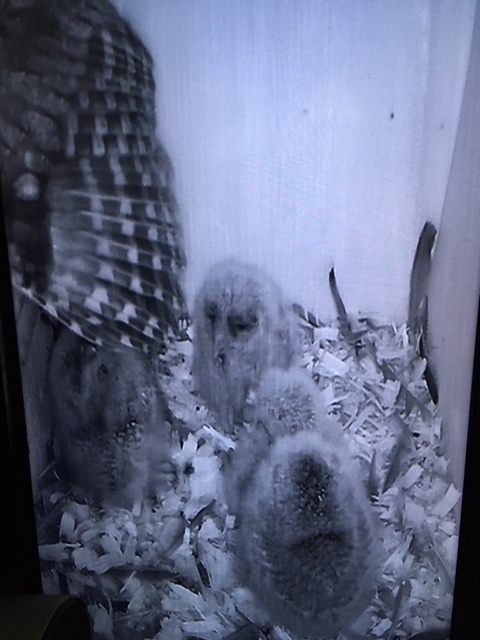 The Owlets at Two Weeks

The owlets are now two weeks old.  I watch them on the owl cam, waddling around the box, shuffling through the sawdust, looking up at their mother who is sitting in the box entrance.  She is waiting to leave, anxious to leave.  As the owlets grow larger each day and spring days get warmer, the box is becoming crowded and uncomfortable.

Adult screech owls are small (6.3 to 9.8 in tall), so the owlets must be tiny at this stage, but their quills are beginning to grow and their facial features are more pronounced – dark shadowy rings around black eyes, little curved beaks.  The owlets are beginning to rotate their heads and necks in a wide circle, a typical screech owl habit.

At this moment they are quiet, waiting for the excitement of the evening – which is food!  The owlets rock back and forth; one cheeps, but for the most part the box is quiet.  In this warmer weather, Mrs. Owl looks out of the box during the day, feeling the fresh air on her face.  In the evening she waits for her mate patiently, quietly.  Tonight there is no trilling or whinnying.  Just waiting for the evening hunt to begin.

The screech owls have been good parents so far.  Last night there was a series of feedings by both the male and female.  When the female brings a morsel, she will carefully feed it to one or more of the owlets.  The male on the other hand has a tendency to drop dinner in the sawdust and let the owlets fend for themselves.  He stays only long enough to see that one of his offspring has taken his offering and then swiftly leaves the box, a look of alarm on his face. 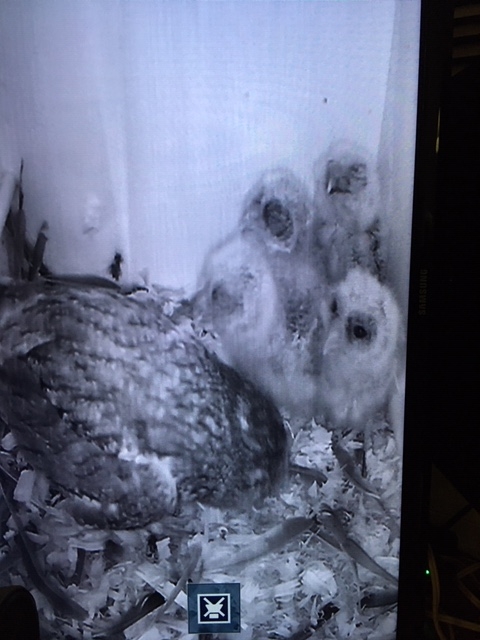 Last night one of the parents brought a worm into the box that squirmed around, curling through the sawdust.  The owlets backed away into a corner and huddled, as if not knowing what to do with it.  After several minutes of watching the worm, the closest owlet grabbed it in its beak and swallowed the worm like it was a strand of spaghetti.

It’s slowly getting darker and the owlets are becoming restless, noisy.  They peck at the sawdust, picking up morsels left from last night.  Mrs. Owl drops down to the floor of the box and searches for food.  She hops back into the entrance and stretches her head out, then swoops down into the yard, leaving the owlets alone for the time being. 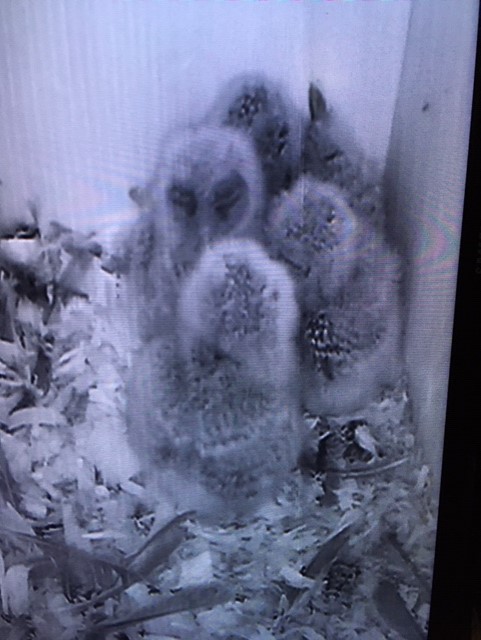