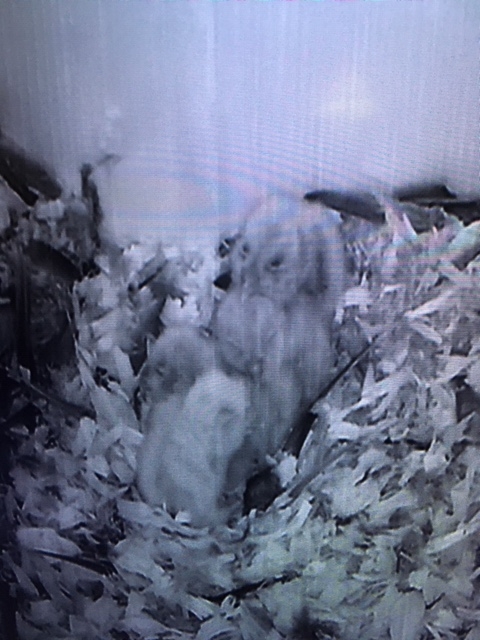 The Owlets at One Week

The owlets are all almost one week old now.  The first egg hatched on Thursday, April 9, and the last on April 11, bringing the final count to four owlets.  Two eggs hatched between Thursday and Friday, a first in our experience -we have never noted two eggs hatching on the same day in any of our owl boxes.  When the owlets first hatched, they were fuzzy, almost formless balls of white.  They flopped from side to side, unable to hold themselves upright, as if lacking any bone structure.  Or they would huddle together in one mass in the center of the box, occasionally lifting a head, revealing they were not shapeless after all.

At one week old, the owlets are no longer amorphous blobs; they have wings which they stretch out as they awkwardly push out from under their mother and wobble around, all fuzzy round heads and tiny beaks and black eyes.  For most of the day, 20F spreads her wings, covering her brood, sitting on them quietly.  She chirps and whinnies softly, singing to them, the owlets chirping and peeping in return.  Listening to their chirps and peeps is as much fun as watching them.  As the day goes on and afternoon approaches evening, the family becomes restless.  The owlets try to escape from under their mother’s wings and 20F starts to move around, too, gazing longingly at the box exit.

She trills, calling her mate, around 7 p.m., but he does not make an appearance until after dark, bringing her a lizard, a garden snake, a moth.  Last night an entire cedar waxwing was dropped in the box.  This was a feast!  20F immediately began tearing the bird apart excitedly and feeding it to the owlets.  This morning the remainder lay in a corner of the box, a snack for 20F and the owlets throughout the day.  It’s astonishing how quickly the owlets are growing; in three more weeks they’ll be ready to fly. 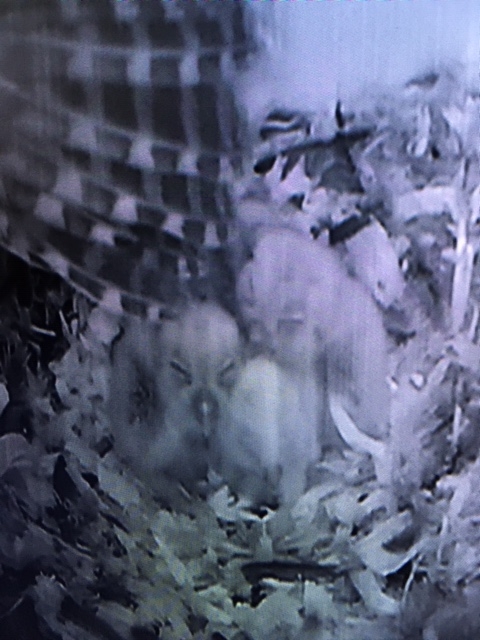