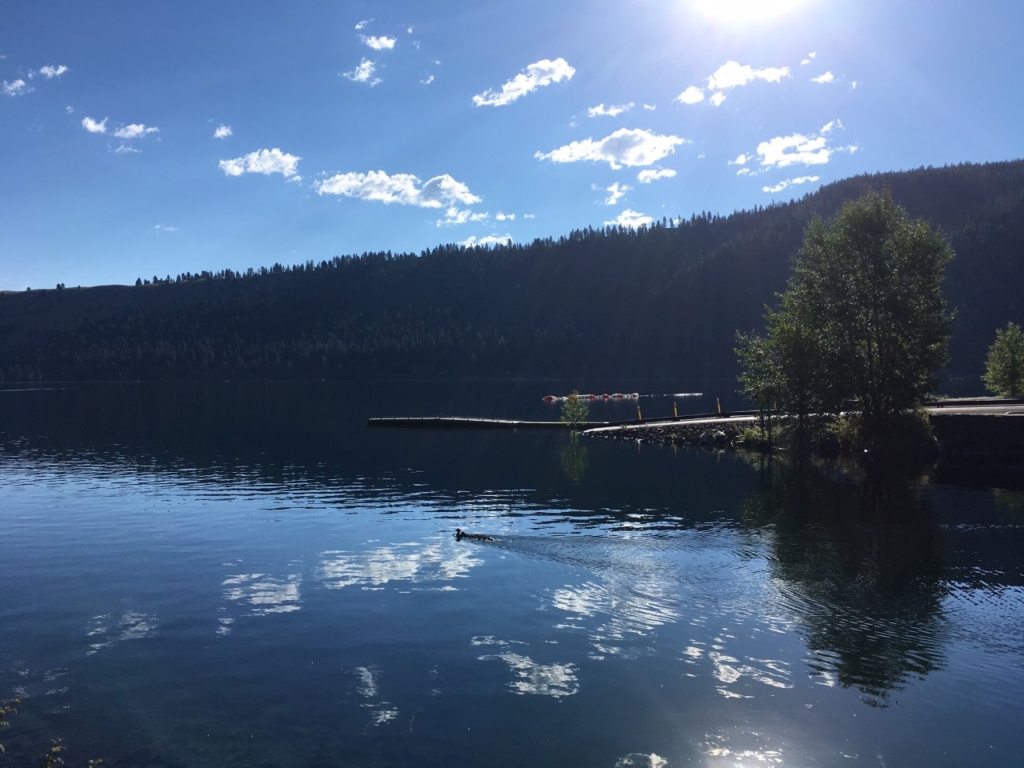 The last morning at Wallawa Lake I walked down to the river, taking the path that curved gently down through the trees and brush.  Standing in front of a bunch of asters stood a doe with her fawn.  Startled by my sudden appearance, they froze and stared.  The doe stepped slightly in front of her fawn in a protective manner while her little spotted baby held back, still staring at me.  I remembered what a friend had said about “heart speak” and I called up the skill.  “I’m sorry I frightened you,” and stood still.

The fawn jumped away to the side, then turned back, still curious.  The tiny deer faced me, its large dark brown eyes wide while I snapped a picture with my phone, hoping it would turn out.  Slowly the doe moved down the path, looking back occasionally, following her fawn as it disappeared ahead.  They seemed to be heading to the same spot I was and I followed, careful to stay well behind them. 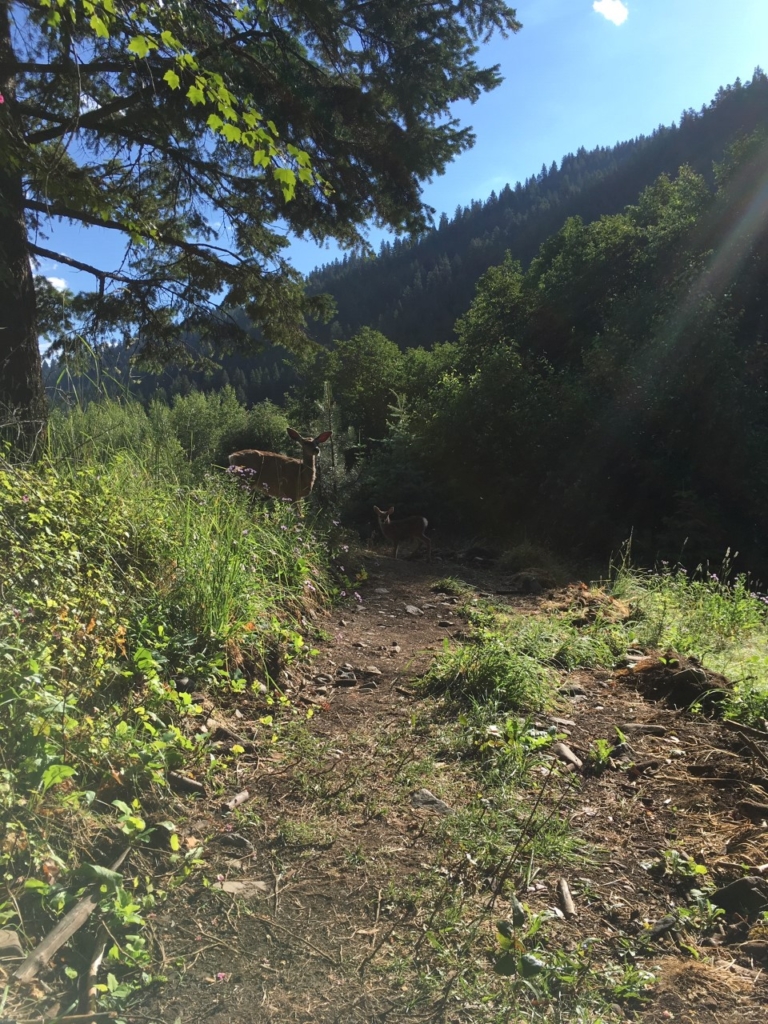 The earth was damp from Saturday night’s storm, the air cool and sharp.  High in the cottonwoods, bald eagles have built a nest.  There are three eaglets and even though they are not all visible, they are there, buried deep in the nest, waiting for their parents to bring them food. Each morning an eaglet has been perched on the nest or nearby, flapping its wings as if stretching.  This morning, there are two, almost as large as adults, testing their wings.  They seem to like the nest; it is still home for them.

Wallawa Lake is quiet at 6:30 a.m.  Only a few fishermen are at the marina, readying their boats, and campers walking their dogs, or, just walking.  Like me.  I like to sit at a picnic table that juts out toward the water where I can look for the adult eagles and a female common merganser I’ve been watching.  She has a rusty brown head with a bit of a fringe along her neck, her back a grayish brown with white under her wings.  This morning she is swimming past me with her large brood that strings out behind her.  The ducklings are mostly rusty brown with white spots on their backs.  They wiggle around in the water, diving, disappearing under the water.  The ducks swim toward the roped-off swimming area, weaving in and out of the tall reeds along the shore.  When they approach the sandy beach, a few ducklings venture on to the muddy beach and hop back into the water almost immediately.  They are unsure of this new surface, this texture beneath tiny webbed feet.

Mother duck leads them all the way to the end of the swimming area and turns around, gliding in the other direction.  I try to follow, guessing her next move, wishing the beach was not so wet and marshy.  As she speeds along, the ducklings hop on her back, one by one and huddle.  Many can fit on her back but not all 15, so the rest follow directly behind giving the impression that Mom has a very long tail.

I follow her as she swims toward a group of boats docked at the marina.  Two geese are heading in her direction and I wonder what will happen.  She sees the pair and leads her duckling closer to the boats, allowing the geese plenty of room to pass.  Then she weaves around the boats, heading toward the end of the marina.

A long log floats in the lake between the docks.  Another female merganser sits on the log, tucking its head in its wings.  Mother duck hops on the log and sidesteps several feet as her ducklings follow, imitating her.  She sits there, glancing toward the other duck and seems to be debating if this is a good place to rest.  She waits a few minutes, stretches her wings, looks at the other merganser.  Then she hops back into the water, her brood hopping after her.  Fifteen tiny splashes, one after the other.

She is heading toward the end of the marina, so I hurry to get to the other side of the inlet.  Luckily, I am on the other side in time to see the family speeding toward the wooden dock at the end of the lake.  She swims toward a break in the dock, where there is one step lower than the boards and hops up, walks around spreading her wings.  She jumps back in the water; maybe it wasn’t the right place.

She swims in circles, thinking, deciding, then hops back on the dock again.  One by one the ducklings imitate her, jumping up.  One or two fall back into the lake, but quickly they are all on the weathered, wooden walkway.  Mother spreads her wings, preens, takes a few steps, all her ducklings sitting in a row.  Time to rest.  The swimming lesson is over for now. 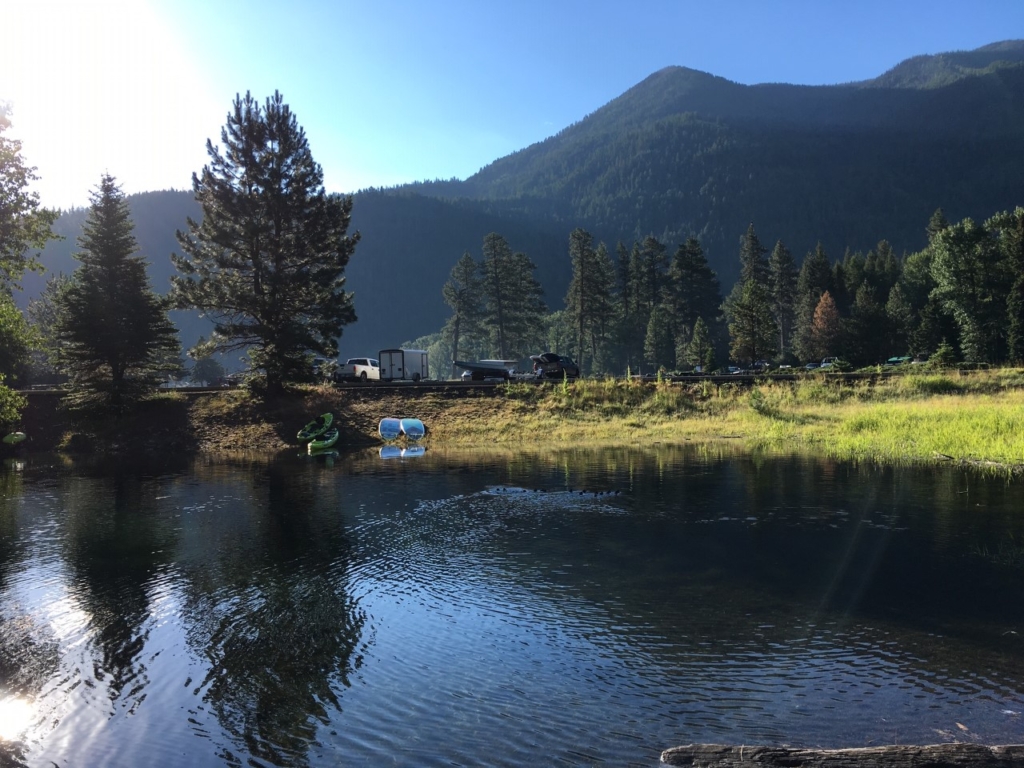