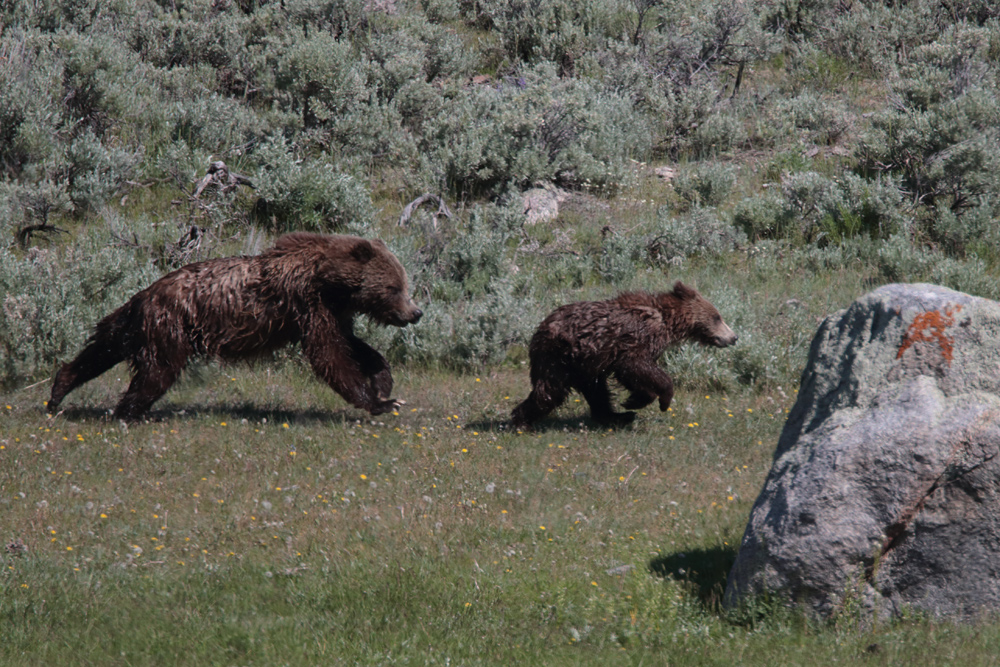 The Junction Butte Pack has moved to Lamar Valley.  Seven wolves, five black and two grays, including 907F, were bedded in the sage on the south side of Lamar River.  Earlier this morning they tested bison, no doubt looking for calves, weaving in and out of the sage, or lying bedded, still watching the bison. 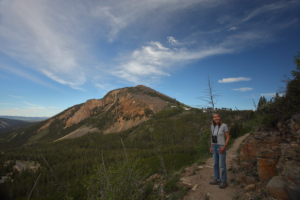 It was a quiet morning without the huge crowds I expected this time of year, but there were still plenty of visitors.  When it looked like the Junctions were staying put, we headed to Slough Creek to see the Prospect Peak Pack’s puppies.  Scope set up in the upper lot, we stared at the sage den waiting for the puppies to peek out.  The Prospects have built their den in the same sage and sand cliffs used by the Slough Creek Pack and Junction Butte Pack in previous years.  There are five pups and four adults in this pack, all of them gray, and the view from the Slough Creek lots is a great distance.  A single light gray wolf wound her way up the grassy slope to the den area; maybe we’ll see their pups tomorrow.

Further down the road near Boulder the grizzly sow known as “the Junction Butte bear” and her yearling cub grazed in the meadows below Junction Butte.  They soon traveled west at a good pace, bounding across the meadows.  Mother and cub alternately chased each other and playfully wrestled, then ran into the marshes soaking themselves huge, grassy puddles.  It’s been a long time since we’ve watched a mother bear play with her cub.  We believe this bear and cub are the same pair we saw in May 2016 when the cub was just months old.

We took advantage of today’s sunny weather and hiked the Garnet Loop Trail.  It’s been a few years since we hiked the entire loop, often shortcutting by taking hikes into Yancy’s Hole or along the cliffs overlooking the Yellowstone River.  The fields are filled with wildflowers 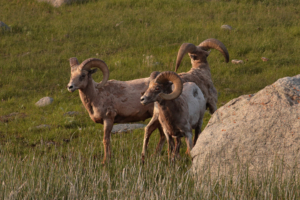 – larkspur, balsamroot, sticky geranium, cinquefoil, and phlox.  We hoped to see a bear or two – we have seen black bears here before – but our wildlife encounters were limited to pronghorn, bison and a wide variety of birds that included a western tanager, dark-eyed juncos, a yellowrumped warbler and a pair of bluebirds nesting in a tree trunk.

As we approached Yancy’s Hole it began to rain lightly.  We hurried up the trail when a huge sandhill crane flew over us, patrolling the area.  She was using diversion tactics to keep us away from a nest.  Usually their trilling is a wonderful sound; instead this was more like a scream or severe scolding.  We tried to get over the rushing stream to get out of her way, but there were no narrow crossings and the water was too fast.  After surveying the stream up and down we found a log to walk across.  The sandhills seemed much relieved and went back to guarding their nest.  We waited out the rain in the outdoor kitchen used by Roosevelt Lodge for barbeques.  After the heat and swarming mosquitoes, it was a welcome break bringing waves of cool air.

Heading back to Lamar Valley, we checked on the Slough Creek den and stopped at the osprey nest just in time to see the male fly in and feed the female.  The wind came up suddenly, developing into a short dust storm that was so strong it rocked the car.

The Junctions were still bedded and milling about in the same area as this morning.  We followed them as they traveled down the valley, searching for bison calves.  They continued east along the river, where they chased some elk into the trees and disappeared after them.

Videos can be found on the last page – Day 7