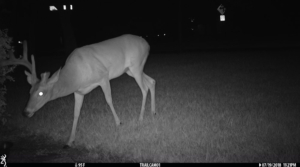 A river of life has passed under me.  I feel like I’m standing on a bridge watching the past months rush by.  Here I am looking toward the end of summer, trying to grasp all that has happened and take in and appreciate this new place.

Two goldfinches sit in the tray of the sunflower seed feeder, pecking at insects and shells of seeds.  One is a striking blackback, bright yellow and midnight.  Another blackback flies up from the bird bath to one of the socks where the other joins him.  We have goldfinches in the middle of summer!  In our old neighborhood, we barely saw them in winter.

If there is a reason to live in this place, it’s the wildlife.  Each evening deer patrol the neighborhood, a herd of seven to eight bucks marching from lawn to lawn, munching on grass, drinking from bird baths, and wandering down the street.  They stroll out from the trail on Sierra Nevada and bed in the woods along Q Ranch Road.  The does gather with their fawns at the other end of the neighborhood, grazing under tall oaks or in backyards.  Daisy and I are often surprised by a buck or doe nibbling on a bush on our evening walks.  It is what we wanted, these moments of surprise, astonishment, and awe.

Each night the trailcam catches the rest of our wild inhabitants on camera.  Deer usually visit before 10 p.m. and then in the morning around 5:30 a.m. or 6 a.m.  Foxes visit sporadically between 9 or 10 pm. and again in the early morning hours.  Coyotes also come by sporadically to drink water and hunt for food.  Occasionally we see foxes and coyotes crossing the road and trotting across yards at night while walking Daisy.  And there are armadillos who make a path between our house and our next-door neighbors’.  They have dug holes in the neighbors’ yard and left toys in the holes!  I am slowly embracing this place.  It feels a little cooler here, but not much.  Still the thermometer doesn’t go about 90 in the backyard; mornings begin at 75º and rise to 89º at 10:30 p.m.

In the middle of the day at Scattered Oaks, the sun is hot, burning my face.  Willis is a trooper and most cooperative in the morning when the temperature is still in the 80s.  A couple of weeks ago, one of my barn friends noticed he had a cloudy eye.  I was horrified I hadn’t noticed – it wasn’t even visible unless Willis was standing in a certain light and Willis never complained or acting like he was in pain.  Of course, I called the vet.  I wasn’t worried until I read all the possible ailments it could be on the Internet.  It turned out to be an ulcer which appeared as a white line on his eye and had mostly healed on its own.  The vet said we were very, very lucky because eye problems in horses are extremely difficult to treat, Willis being a testament to that.  He flung his head in the air, breaking the cross ties when the vet tried to look at his eye, so Willis had to be sedated.  Treating his eye with antibiotic ointment took patience – applying a quarter inch of ointment to a finger, then scratching and soothing Willis until I could slip it into his eyelid.  After two weeks he seems fine. 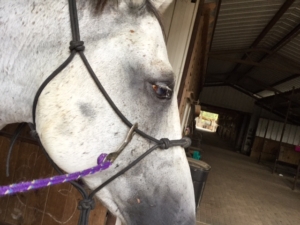 Another baby was born at the barn in the middle of summer, a handsome chestnut colt with a white blaze born to April.  Friday morning, Stacie canceled lessons because he was sick and she was taking him to the vet.  Jim told me it was pneumonia.  “Summer is a bad time to get pneumonia” he told me, too hard to heal.  All of us at the barn tried to shake off the news and hope for the best.  Today Amy was at the barn in the middle of lessons, leading April around, petting her, speaking softly to her and asking her if she was ready to come back.  April just stood there quietly with her head down.   I was afraid to ask what happened.  Days later I learned the little colt contracted a virus and did not survive.  A little life lost; a journey cut too short. 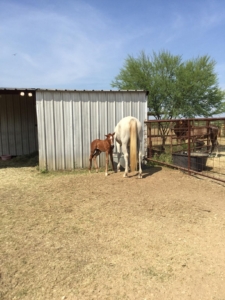