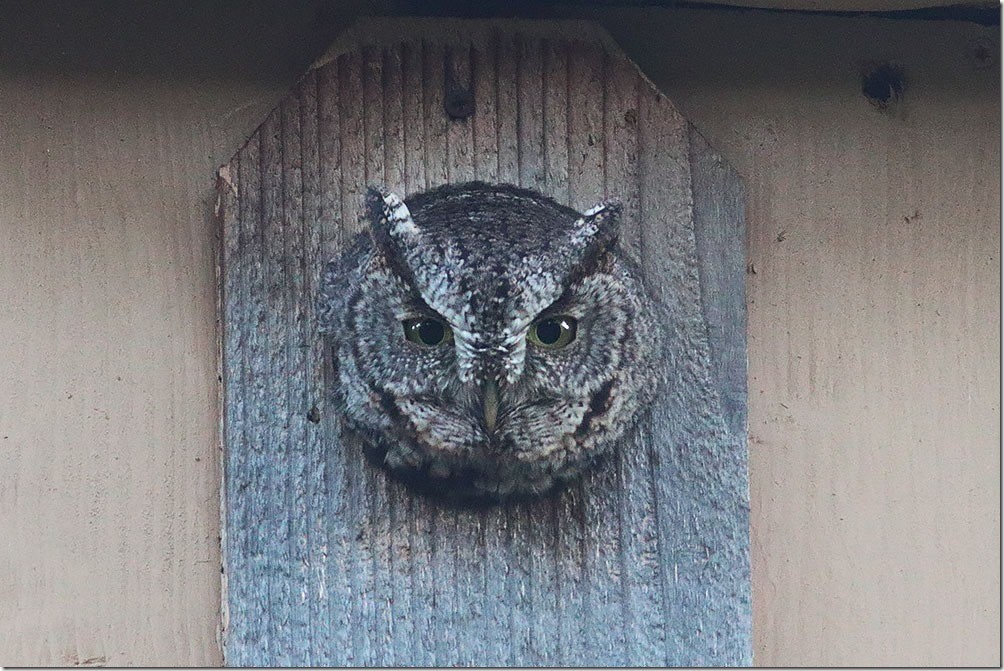 I stood by the window and watched the owl leave:  6:40 p.m.  He didn’t sit on the perch as he sometimes does, but dove straight down into the yard and flew off.  A great horned owl was calling from somewhere nearby, loud enough to hear the hooting inside the kitchen.  Outside, I searched the tops of live oaks, trying to see in between the leaves without success while the male screech owl stayed in the box, peering out.  I wondered what he would do; would he slip back into the box or take off anyway?  The great horned owl is a potential predator and I worried.  But the screech owl did take off – while I was not looking, stepping inside for only a moment.  The great horned owl continued calling for a long while and the screech owl was safe; back in the box the next day.

We encountered a new problem this month.  We turned the camera in the owl box on only to discover it wasn’t working!  Tim investigated every possible cause for the issue, but in the end the only solution was to install a new camera.  Now.  At the most inopportune moment in the nesting season.  With the male settled in the box it would have to be done after the owl left when it would be dark.  It sounded dangerous and difficult, but we didn’t have much choice if we wanted to watch the owls.

Luckily, the new camera arrived a couple of days later.  Tim got his tools and new portable utility light ready and prepared for the “installation.”  Fortunately, the owl left-obligingly at 6:37 p.m., right after dark.  We unbolted the brackets that keep the owl box at its correct height and lowered the box, but it still wasn’t low enough for Tim to reach into the box.   We had to lay the pole supporting the box on the ground where Tim could unscrew the lid of the box and remove the old camera. 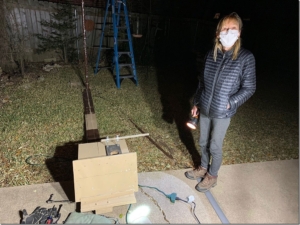 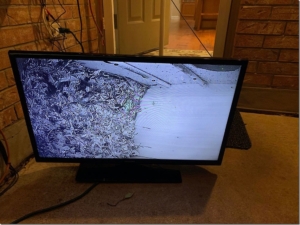 The box is heavy and it lowered slowly, but steadily.  Once the box was on the ground, Tim unscrewed the lid where the camera was attached, covered in dust.  Good thing we wore masks with all the dust and feathers flying around.  Tim blew out the dust with a leaf blower and got to work removing the camera and reattaching the new one.  Then we tested it, bringing a TV outside to make sure all cables were connected correctly.  The old camera had definitely died, though there was no evidence of chewed wires or any other damage, and the new camera worked great!

Tim screwed the lid back on and we lifted the pole with the box to an upright position.  Then all the brackets were tightened, another test, and we were ready to go.  The next day the owl was back in the box.  I don’t think I’ve ever been so happy to see the him.

I hope we never have to go through this again, but cameras don’t last forever.  Our plan is to check the camera in early fall, maybe September, before the male owl arrives so that if there are repairs or adjustments to be made they can be done without disturbing the owls.  It was an ordeal lasting more than four hours, but we are lucky – lucky to have the owl and that it all worked out.