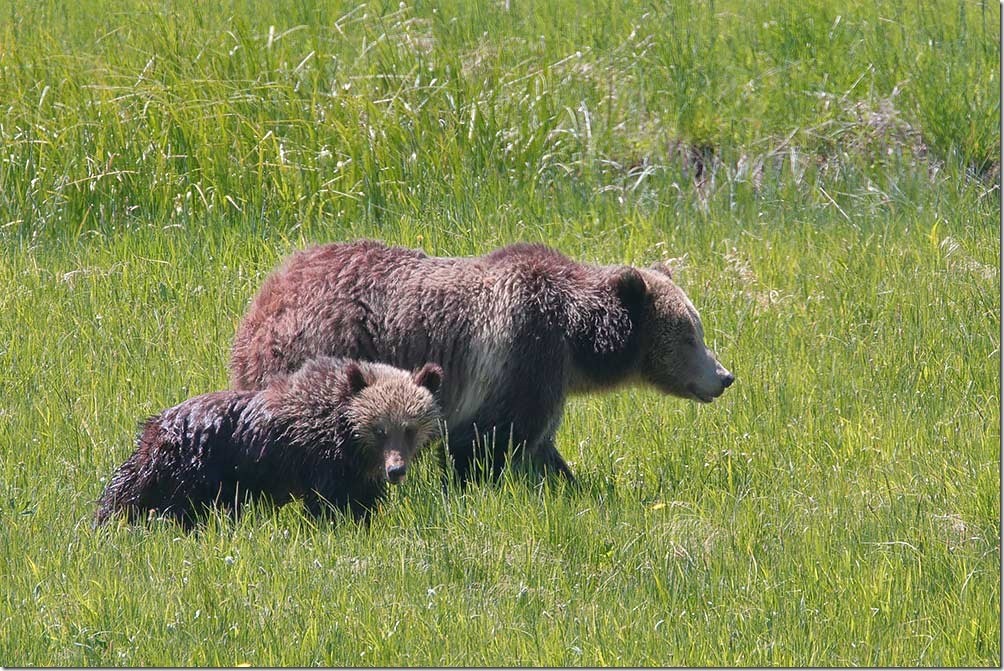 It was significantly cooler today as we headed toward Hayden Valley.  Crowds were spaced out over the turnouts watching two wolves from the Junction Butte Pack, both black with white dots on their chests, were cruising the valley, hunting for food.  They tested a few bison, but were quickly challenged and trotted off.  While we watched the wolves, a courting pair of black bears foraged at the tree line at the edge of Amethyst bench.

We left the young wolves and drove past Slough Creek in the interest of time.  Near Floating Island, a large black bear boar was foraging in the grass.  He meandered from one place to another, stopping once to scratch his back against a tree.  Down the road a little farther, a black bear sow and her two coy foraged in the grass near the road.  There was a lot of room for the bears to move toward the trees, but they stuck precariously close to the road.  One of the cubs walked onto the pavement a couple of times.  Cars and big, heavy trucks sped fast, but the bears kept on foraging, ignoring the crowd building around them.  The whole situation worried me.  Three bears in a dangerous spot and a crowd of people pressing in on them. 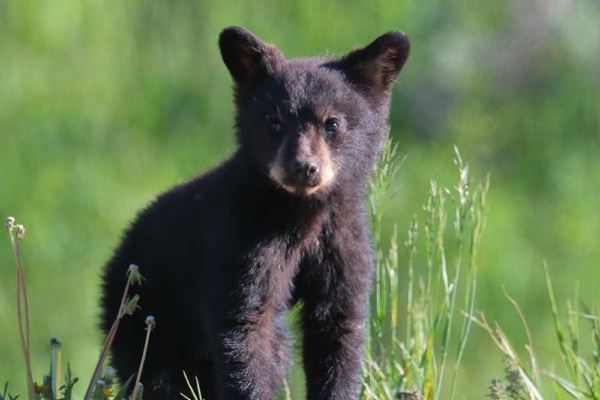 When we reached Alum West the turnout was empty and the valley was quiet.  Bison dotted the meadows here and there, but there were no wolves in sight.  After scanning the hills, we left for Yellowstone Lake, hoping we would find Raspberry and her cub from last year and Snow.  Raspberry, also called the Lake Butte bear, and her cub were crawling over deadfall on the steep hillsides near Lake Butte Lookout.  The cub, golden brown like his mother, followed closely behind her as she dug in the dirt, crawled along logs, munched on grass.  Once the cub came too close and stepped on her and she fussed at him.  When the bears came too near the road, a ranger hazed them with a loud noise, sending the bears running down the hill and then up over the ridge.

After a while the bears came back into view and played with each other.  They pawed each other’s faces and rolled in the grass, mouthing each other as if fighting.  It was fun to watch Raspberry’s playfulness.  She is a good mother and remarkably tolerant of the crowds.

We stopped at Gull Point and then walked around Bridge Bay Marina.  It was a beautiful afternoon; warm but breezy.  Tim spotted a nest in a tall pine tree and noticed a large bird fly in – a raven.  Made of sticks and twigs, the huge nest is nearly at the top of the tree and swayed in the wind.  Suddenly another adult flew in and the chatter of little chicks could be heard.

We tried Hayden once again, parking at Alum West.  We looked around and still found nothing.  A guide who stopped with her clients told us she had seen the Wapiti Pack in that area, and later another visitor confirmed the den site.  After searching the sage and trees, Tim found a light gray spot lying at the edge of the sage that eventually materialized into a gray wolf.  We watched that spot for what seemed like hours before the wolf finally got up walked into the deadfall.  The wind was terrible and nearly blew us away, so we folded up the scope and wound our way back through Canyon and Mammoth.