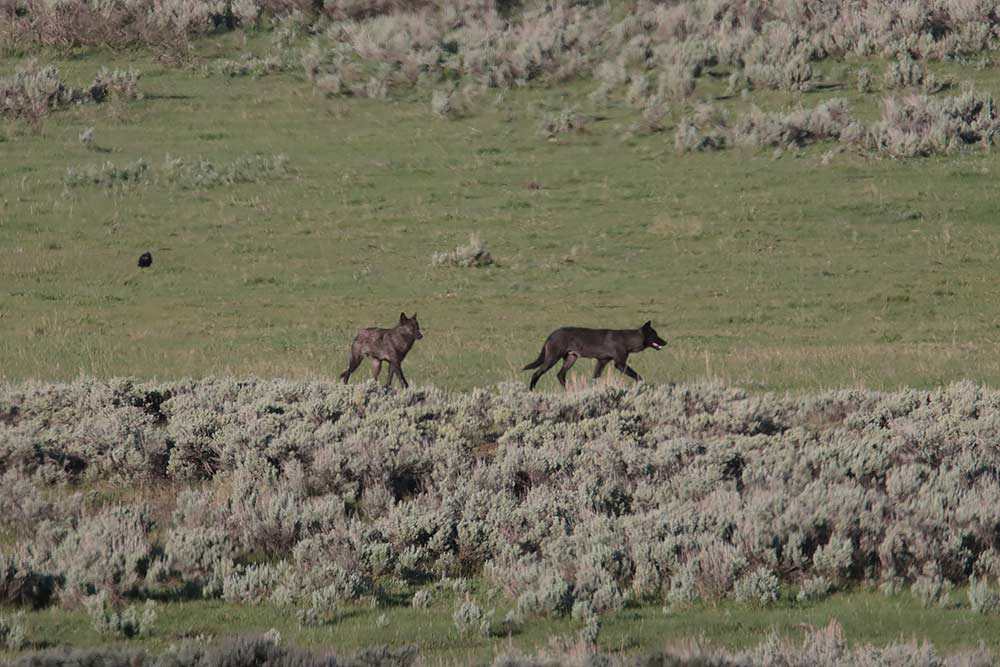 It was a chilly 40º this morning when we passed through the Northeast Entrance.  Last night as we drove back from Canyon, the Junction Butte wolves were scattered all over Lamar Valley; this morning a solitary black traveled up and down the valley.  There were probably other wolves from the pack out there, hidden in the trees or behind a berm, but the lone, black wolf was the only visible wolf, meandering, sniffing the ground.  It acted like it would stay in the valley, so we drove on to Slough Creek.

No puppies were visible when we first arrived at Slough Creek, but it wasn’t long before a black wolf showed up in the flats carrying part of an elk calf.  The puppies came tumbling out of the trees and followed the black wolf in a single file up the slope and into the trees.  Then all went quiet at the den site.

When the puppies disappeared into the trees, we drove down the road as far as Hellroaring.  As we passed Petrified Tree a handsome black bear suddenly emerged from the tall grass, foraging near the road.  Tim swung the car around and was able to get a few photos before the crowds arrived. 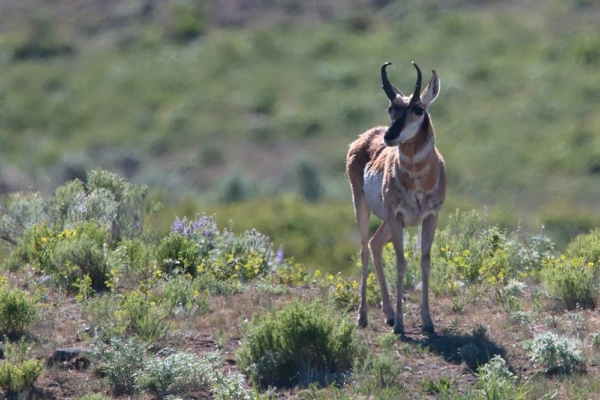 Wolves were still being seen in Lamar Valley so we headed back through Little America.  A collared black wolf was traveling on the south side of the road, trotting, then stopping and lying down, then getting up and moving again.  It seemed like he wanted to cross the road, but there were too many cars and people.  We parked near the Lamar Canyon bridge and waited.  And waited.  While we were watching the black wolf, a large cinnamon black bear suddenly appeared along Slough Creek, traveling along the creek and eventually climbed over the ridge toward the den.

The day warmed quickly; even with the breeze it felt hot.  Here at this altitude, the sun is hot, and even though it’s dry, it’s easy to feel like you’re frying.  We spent the rest of the day going back and forth from Hellroaring to Barronette Peak, taking a break at Floating Island Lake where we watched ruddy ducks and yellow-headed blackbirds fuss at each other.  We looked for wildflowers along the stream by Buffalo Ranch.  We waded in Soda Butte Creek and sat in the shade.  The water was numbing, but kept us cool.

This is Yellowstone at the beginning of summer.  The temperature climbed to the 90s and with nowhere to swim, staying comfortable can be challenging.  We did take a few short hikes, walking above the Yellowstone River canyon where a female harlequin duck and mergansers were floating in the rapids and sunning themselves on the rocks.  We walked down to Soda Butte Creek from Hitching Post and watched the geese with their goslings, who seemed bigger already.  We watched a mountain goat family and their two kids play on the cliffs of Barronette Peak and called it a day around 5 p.m.

On our way back we spotted a coyote hunting in the tall grass along Soda Butte Creek.  He limped, carrying a hind foot in the air, but otherwise looked healthy.  He was an energetic hunter, racing and pouncing after ground squirrels.  Earlier today we saw some baby ground squirrels in Lamar Valley scampering around the sage and diving in and out of their dens.  They are so cute!  About the size of mice, they are tiny versions of their parents.