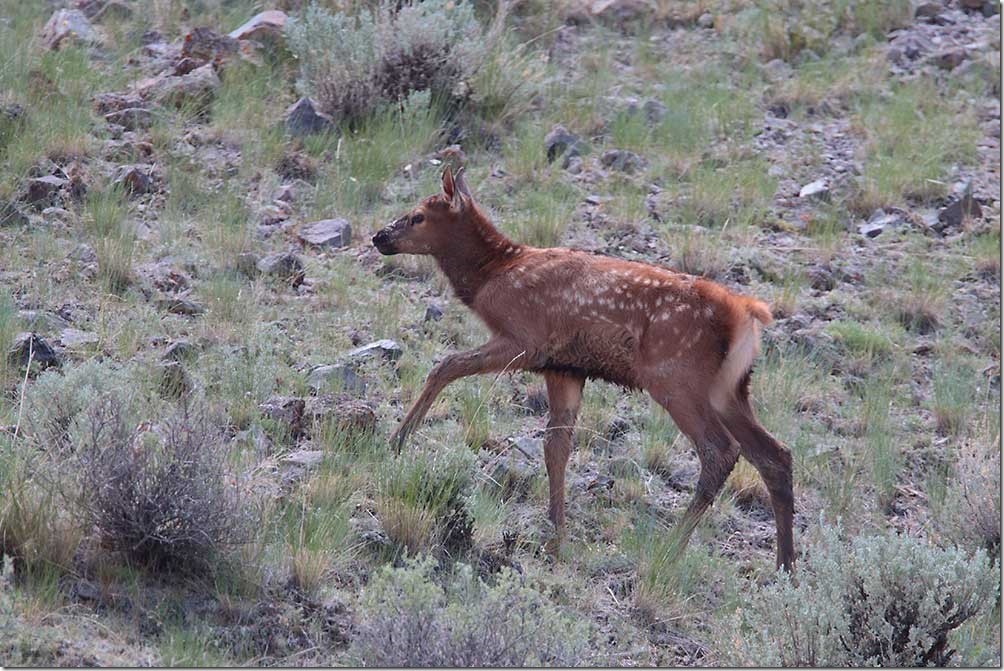 Today the temperature rose to the 90s as we drove around the Park.  We made it out the door earlier this morning, but still not early enough to catch any moose.  Just past the northeast entrance we stopped for a handsome red fox with a full, fluffy coat and tail.  Nice to start the day this way.

We headed straight for Slough Creek.  Lamar Valley was filled with bison and their spring calves; it’s like a giant nursery.  Most of the calves are at least a month old by now.  They lie in the sun next to their mothers or graze nearby.  This morning a large herd crossed the road before the Institute, a sea of bison cows closely followed by their reddish brown calves. 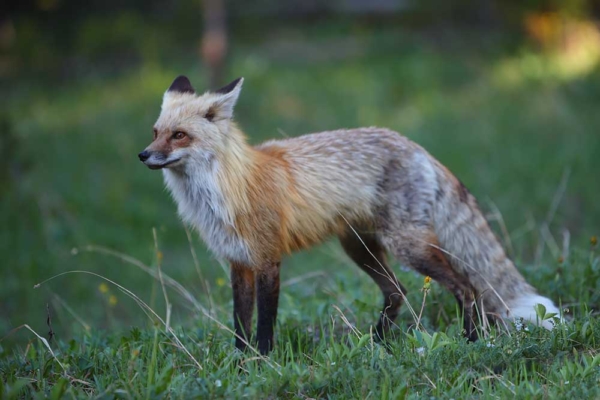 Slough Creek was cluttered with vehicles filling the turnouts and lined up along the camp road.  Somehow we managed to squeeze into a parking space at one of the lower turnouts.  At first the Junction Butte pups and adults hid behind the stand of fir trees, but they soon ventured out into the den area, climbing over the bench to a grassy area where they were visible.  The pups were watched closely by a black adult and a gray adult who must have been 907F.  The two wolves and eight puppies went back and forth from the grassy plateau to the den area, the puppies playing and the adults bedding nearby.  After a while the black wolf led the puppies up the slope to the trees, the puppies following in a crooked line and the gray wolf taking up the rear.  As the sun rose higher in the sky, it was getting hot, and the wolves must have wanted to cool off in the shade.

We were glued to the scope and camera watching the wolves when someone shouted “Wolf!”  A large black wolf just ran across the meadow in full view – which we missed because we thought we were watching the wolves.  We laughed – but we were both sorry we missed that close encounter.  Not long after that, two black wolves appeared in the den area, one of them carrying a chunk of meat.  Once again puppies streamed down the hillside.  The two black wolves marched up toward the trees, puppies trotting after them, and that was the last we saw of them.

We thought about driving south today, but by the time we left Slough Creek it was after 9 a.m.  It’s probably best to get to Hayden Valley early to see the Wapiti Pack and make a day of it.  I really want to see the Wapitis – they have eluded us for the past two years.  And I would like to see the grizzly sow, Raspberry, and her year-old cub, as well as Snow, Raspberry’s daughter.  The bears are often visible in late morning and the afternoon, but the Wapitis are simply hard to catch.  I won’t even think about the Mollie Pack, hidden away in Pelican Valley.

So we took our time driving to Mammoth and as far as Willow Flats, scouting fishing sites, looking for wildlife.  On the way we saw our second coyote of the day, hunting in the meadows near Blacktail Ponds.  Mammoth was overflowing with visitors; long lines everywhere.  This must be what it’s like in July and August, but the pandemic has exacerbated everything.  Inside the Park, some lodging and services are closed and except for Roosevelt Lodge, there is no in-house dining. 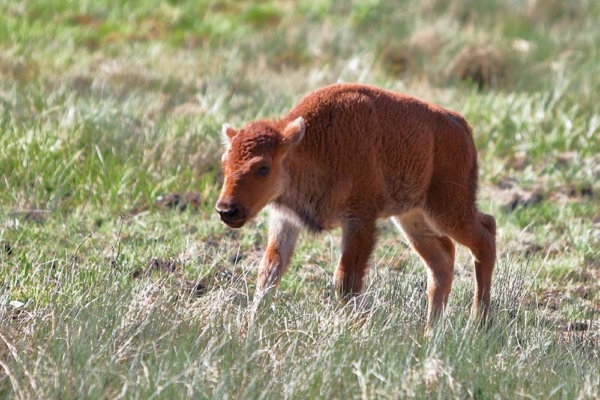 We snaked through Mammoth and the Terraces, looking for pika and golden mantel chipmunks at the Hoodoos, Indian Creek and Sheepeaters Cliff.  We stopped for a break at the Mammoth Hotel, finding a comfortable space in the Map Room which has been cleared so people can relax there or eat that a safe distance.  For us, it was a break from the crowds.

We looked for geese and goslings below the Mammoth campground near the Boiling River, finding only one goose sitting in the tall grasses at the edge of the river.  We did see a cow elk with a calf high on the rocky hills overlooking Gardiner River.  The cow led her calf along a narrow path, grazing as she went, while her calf followed hesitantly.  The trail seemed treacherous even for an adult elk.  I felt a little sorry for the calf and a little worried.

We cooled off for a while in the rushing river, soaking our feet in the cold water, enjoying the cool breeze in the canyon.  Then we headed back to Sheepeaters one last time to look at the river and search for pika.  We didn’t see any pika, but we did see a golden mantle chipmunk.  By then the temperature had reached 91º and we were hot and tired, so we headed back to Silver Gate.  People were cooling off everywhere, wading in the streams and rivers – Lava Creek, the Lamar River near Fisherman’s, Pebble Creek, Soda Butte Creek.

At the Confluence I spotted a pair of geese and several fuzzy goslings huddled together near the adults.  One goose was in the water while the other stood near their clutch.  The goslings have lost their downy yellow feathers and are now a fuzzy gray.  They all stood at the edge of the water, from time to time stepping in to take a drink.  We watched them for a short while before noticing two other pairs of Canada geese with goslings, each pair with five goslings.  All the geese waddled together like one flock, the adults herding the goslings along the shore, stretching their long necks and pushing their young with their beaks.

It’s light about 5 a.m. and doesn’t get dark until about 8:30 p.m. or later.  In in this heat, the wildlife waits in the trees, not coming out until sunset.  It makes for a long day.  We’re going to leave early tomorrow for Hayden Valley and Yellowstone Lake where it should be cooler.