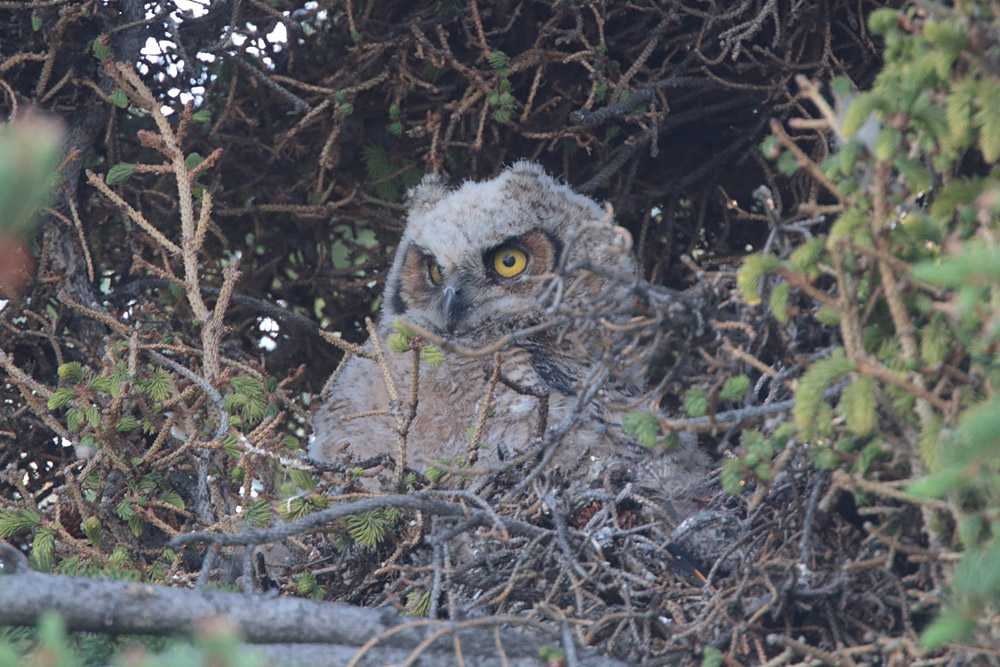 We got a very late start this morning and again headed straight to Slough Creek.  Cars filled the turnouts at Aspen and along the road, visitors with scopes pointing at the rocky cliffs above Slough Creek.  We had missed something. 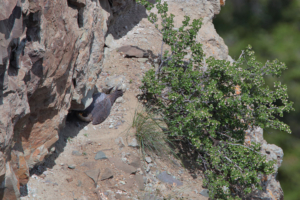 We squeezed into a space at Slough Creek and climbed the hill where one lady assured us a wolf was still bedded – and advised us to hurry up before he leaves.  It was reliable 1048M, hanging around the old carcass.  Earlier, others saw 1047M, the alpha male, and other members of the Junction Butte Pack come down from the new den site, but it was a quick viewing.  1048M lay bedded for a good hour, got up, changed positions, and moved a little farther west.  He took his time returning to the den, stopping frequently to howl and finally disappeared in the sage up the hill, just as he did yesterday.

Down the road in Lamar Valley we watched a grizzly sow with a tiny cub of the year in a clearing near the top of Specimen Ride.  By that time, it was 11:00 a.m. and 70º.  Chances of seeing a moose were slim, so we turned back and slowly made our way to Tower Junction and up Tower Road.  Near Rainey Lake we saw a black bear briefly and in the meadows that border Calcite another black bear.  A peregrine falcon is nesting in the cliffs above Yellowstone River on the Tower Road side.  She is squeezed into a narrow slit in the rocks so the eggs were not visible. 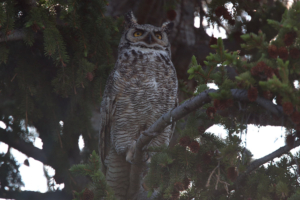 We weaved our way to Mammoth, searching for bears and fox along the way.  The great horned owlets were hiding deep in their nest this afternoon.  One owlet suddenly popped up and just as quickly dove down into the nest.  He was huge, almost the size of an adult, but fuzzy.  A short time later the mother appeared, perched on a bough of the great pine tree next to the nest.  An owlet hopped out of the nest and perched alongside her, occasionally stretching its wings.  It jumped up and down, from one branch back to another.  The mother looked down at her young, decided they were okay, lifted her wings and flew west over the ranger’s house.

After dinner at Mammoth we drove up to Swan Lake Flats hoping to catch Quad Mom and her two cubs, but had no luck.  Two swans huddled at the edge of Swan Lake in the tall grasses perhaps guarding a nest.