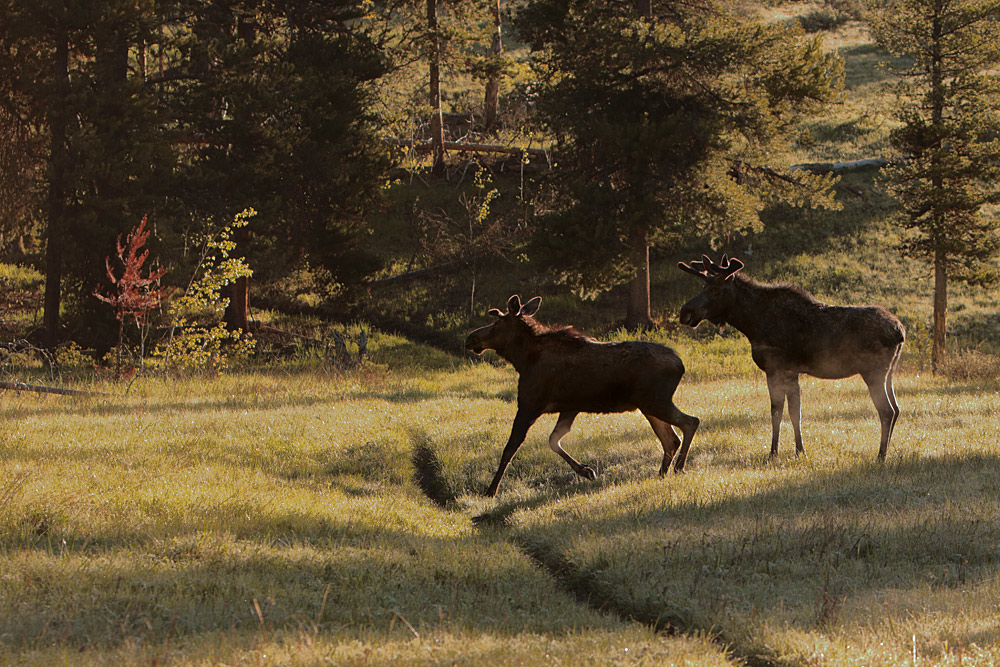 On Saturday, the young lady checking us out at the Yellowstone Association store (now Yellowstone Forever) remarked that we must have seen some drastic changes in the Park in 20 years of visiting.  First, there are more visitors creating some monstrous bison and bear jams.  If bison jams and bear jams are bad now, what will it be like in July and August?  Tonight, we couldn’t get down the Slough Creek road without a major shuffle of vehicles and driving to Canyon is no longer an option without navigating bear jams on Tower Road. 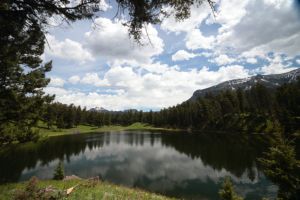 There are other differences which may be more obvious to us.  The wolves are less visible and less reliably visible.  In the early 2000s, the wolf population was racing to its peak.  We would see five packs in one day, a few of which had 20 or more pack members.  That was the time when the Druid Peak Pack numbered 36 wolves and split into 4 packs; the other three packs were the Agate, and Geode packs and Wolf 105F’s group, later named the Buffalo Fork Pack.  We saw one wolf today.  One wolf.

In the northern part of the Park, the Lamar Canyon Pack has 3 adults, the Junction Butte Pack has 8 adults, and the 8 Mile Pack has 13.  I have not seen the Lamar Canyon Pack in over a year, maybe two years.  They are not “reliably visible.”  It is believed they have pups this year and are doing well, even with only 3 adults – 926F, the daughter of 06 and 755M, her daughter, Little T, and Small Dot, the alpha male of the pack.

The Junction Butte Pack did not get their elk last night.  We left them with their heads between their paws on the banks of Slough Creek, watching the cow elk in the water.  In the morning crowds were left staring at the bend in the river and scanning the hillsides.  Luckily, 1048M, one of the black wolves testing the bison yesterday and maybe the same wolf who swam after the elk, was still around.  He swam the creek to the old carcass and then crossed the creek again.  A bull bison chased him up the slope where he weaved through sage, climbing up and up until he slipped behind a bench and disappeared.

Last week the Junction Butte Pack moved their puppies to another den site, carrying them one by one.  No one can say why, but the wolves may sense their pups are safer elsewhere.  Wolves feel human presence and the threats that brings, not to mention danger from bears, other wolves, and even some strange behaviors of their own pack members.  Safety of the pups is top of the list for them.  Leaving Slough Creek, we drove west to view the rocky ridges above Slough Creek from a different angle.  The pack comes down from the rock slopes west of the den site, so the new den may likely be somewhere in there.  Today a plane flew circles over Little America – perhaps looking for the Junction Butte Pack and their pups. 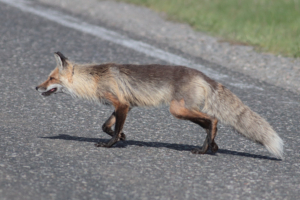 At Floating Island Lake yellow-headed black birds and ruddy ducks float on the pond and hunt in the tall reeds; just down the road a black bear grazes in a meadow.  Larkspur, forget-me-nots and balsamroot dot the tall grass with yellow and blue at Hell Roaring Trailhead; a couple of picas hop through the scree and call to one another

This afternoon we hiked to Trout Lake and Buck Lake, a short but very steep trail to two small lakes.  Trout Lake is surrounded by grassy slopes while Buck Lake lies further up the trail in the woods, encircled by tall pines.  We sat on the trunk of a huge fir that had toppled over during the winter and had Buck Lake to ourselves.  The trail is near Pebble Creek so we walked a little further to an overlook of Round Prairie.  Wildflowers are just beginning to bloom there – I wish I could be here in summer when they cover entire fields.

Tonight, bison and their calves spread across the Lamar Valley.  At Round Prairie we found 4 mountain goats perched on the rocky cliffs: 3 adults and a kid and looked for moose near Pebble Creek and Barronette Peak.  It’s dark by 9:00 p.m.  Hoping for better wildlife viewing tomorrow.