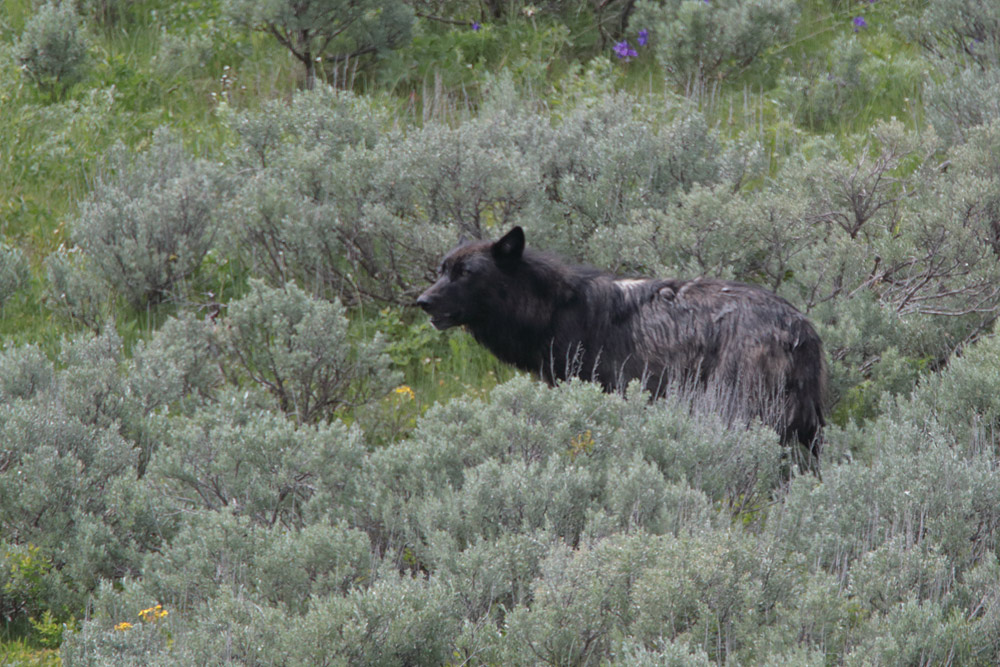 Today made up for yesterday’s disappointments.  The morning was sunny and a chilly 44º as we headed toward Slough Creek.  The crowds were thin and there was no sign of the Junctions; only geese, ducks, and a swan.  The golden eagle is still sitting on her nest tending to her chicks who lift their heads and flap their gangly wings, testing them out. 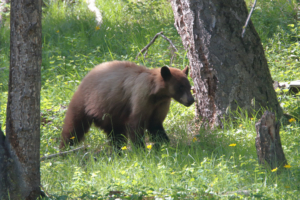 In Lamar Valley, Hikers Bridge was stuffed with people looking through scopes and binoculars.  Small Dot was out in the valley again, roaming the same area where the bears were seen on Thursday with 926F.  He wanted to cross the road but was afraid and couldn’t figure out how to get across with the crowds, traveling back and forth in a squiggly pattern.  He would lift his head and howl, calling to Little T and 926F.  I felt sorry for him.  We lingered, but finally gave up waiting, hoping he would get a chance to make a break for the den.

Since it was still early, we drove out past Barronette Peak, searching the meadows filled with willows looking for moose.  After turning around, I caught sight of a cow tucked deep in the woods a little east of the Thunderer trailhead.  She munched on tall grass and leaves and turned her head to stare at something we suspected might be a calf, but there was nothing but trees.

As we neared the Yellowstone Picnic Area, a young cinnamon phase black bear was padding through the grass and deadfall below the Yellowstone River Picnic Trail.  He ignored visitors lining the road and ambled across the slopes while two lady rangers controlled the crowd.

It was a perfect day to hike the trail and look for bighorn sheep.  We spotted a few ewes and lambs on the cliffs of the river canyon, but no sheep in their usual spots near the Yellowstone Bridge.  Though steep at first, the trail was dry.  Balsamroot sprinkled a yellow blanket over the high meadows.  The Yellowstone River curved blue green below us while Junction Butte loomed on the north side of the road.  Little America, dotted with bison and their calves, spread out along Slough Creek.  A pair of marmots hopped from rock to rock; swallows twirled above the pine trees.  A couple told us about a group of sheep lying not far off the trail.  We had to hunt for them, but we did see six ewes bedded in the low hills.

We wanted to pack in as much as we could before leaving the Park this evening, so we made a quick last drive up Tower Road where black bears were grazing at Rainy Lake and near the campground.  We stopped at Swan Lake Flats and scanned the hillsides and meadows, looking for Quad Mom and her now two-year-old cubs.  Two swans rested in the tall reeds at the edge of the small lake, their heads tucked in.  The sun was just beginning to set, evening shadows still a couple of hours away.  After all the crowds and busyness, a few moments of serenity before heading down the road to Bozeman.