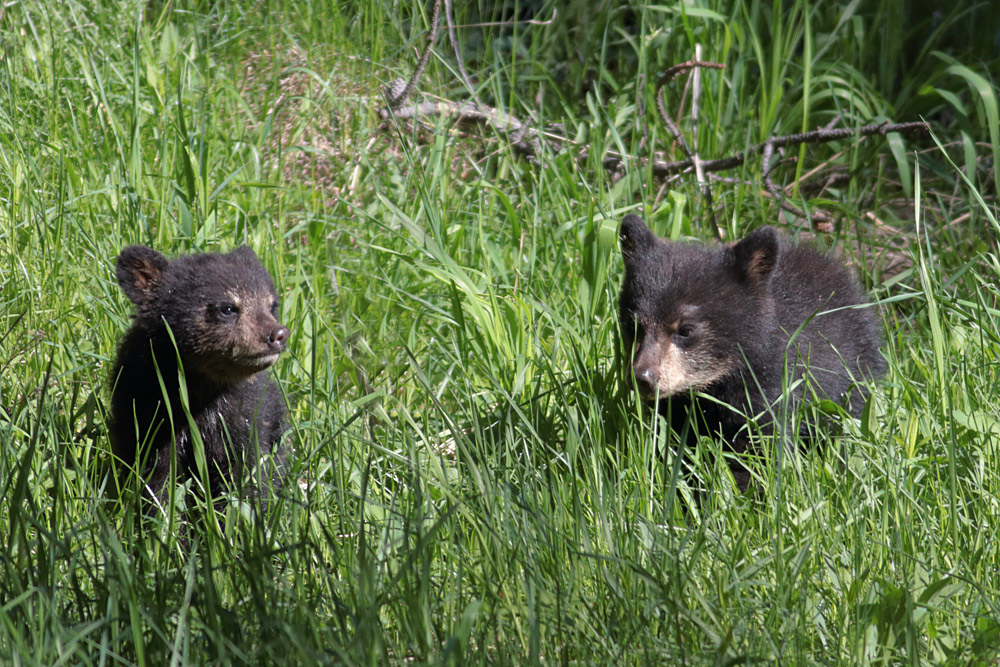 Tonight we watched the Junction Butte wolves chase an elk cow into the creek.  There were six wolves – five blacks and a collared gray who must have been 969F.  We stopped at Slough Creek this morning not expecting much and found two black wolves feeding on a carcass in the willows along the creek.  They were bedded deep in the vegetation and tall grasses before leaving the carcass, traveling east and up the slopes.  We thought they might come back later – and so did we. 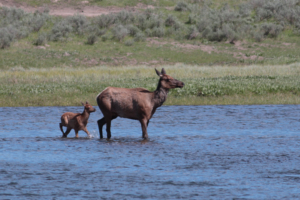 After fighting a bear jam on Tower Road and a bison jam near Yellowstone Bridge, we reached Slough Creek sometime after 7 p.m.  The sun from the west was fierce.  Searching the willows and the banks of the creek; Tim spotted two black wolves trotting toward the carcass.  Suddenly there were more wolves loping across the flats toward the willows.  One, two, five I counted, but there were still more.  The glare of the western sun was blinding.  The wolves bounded toward the carcass; when they reached it, I could barely see them.  A few blacks tested a bison across the creek.  Barely visible, the wolves were simply shadows dancing with the bison.

After a while the wolves either gave up or became bored, leaving the bison alone and lounging about until discovering an elk cow who was watching them very closely.  She actually walked toward the wolves.  Some thought she might be protecting a calf until a younger, smaller elk cow appeared.  A chase ensued, the wolves pursuing the first elk and then the second.  Across and through the creek, they raced after her until she swam a far bend in the creek.  One black wolf followed her, but soon swam back, joining his pack mates on the banks of the creek where they laid with heads down.  Waiting.  We will have to see what the morning brings. 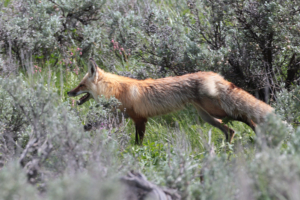 We spent most of our afternoon in Hayden Valley and the Lake area, hiking around Bay Bridge campsite and then along the Howard Eaton Trail.  The trail is dry, unlike some that are covered with water or marshy from snowmelt.  It was a peaceful, pleasant walk along the Yellowstone which has swelled with all the rain and snowmelt.  Later we watched another elk cow standing in the Yellowstone River across from Alum Creek with her calf.  The calf was young, but not a newborn, maybe a couple of weeks old.  One visitor suggested the cow was teaching the calf “This is where you stand when wolves are after you” while another visitor saw the same cow in the water the day before, teaching the calf to swim.

The weather remains sunny and cool.  This morning we sat on the lodge porch and watched a fluffy red fox trot into the tall grasses at the edge of the parking lot and then drove up Tower Road where we ran into our first bear jam of the visit – a sow with three coy.  The tiny black bears chased each other while Mom foraged in the ditch near the road.  They are tiny little things and irresistibly cute.