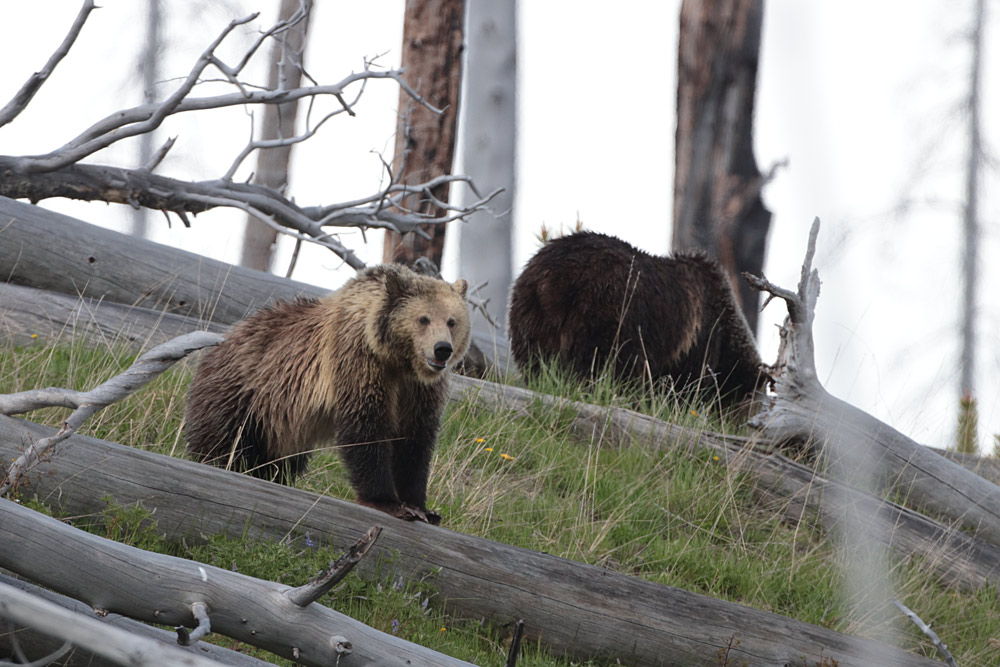 Our reliable Junction Butte wolf 1048M was absent this morning and in his place was 996M, a large yearling, who laid flat in the sun almost the entire time we were at Slough Creek.  Occasionally he lifted his head to let us know it was a wolf we were looking at.  High above him on the rocky slopes, a large grizzly climbed over boulders and through the grass.  Even at that far distance he was massive. 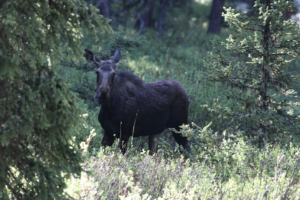 We moved east to Soda Bute Cone where we had just missed one of the Lamar Canyon wolves crossing the road.  It is believed the pack has puppies and are denned north of the road, but with the pack localized around the puppies this time of year and only three adults to shuttle food back and forth, they are hard to catch.  5:30  a.m. is probably a good time.  When the Druid Peak Pack denned in this same area, there were several subordinate wolves to help with baby sitting and hunting, so we would see at least some pack members.  Hopefully, this pack’s litter will survive and grow to a decent number.

Disappointed, we continued on to Pebble Creek and found a cow moose grazing at the edge of the trees.  Moose numbers in the Park have grown; over the winter we heard people saw as many as 8 moose in one area.

We ran into a couple of black bear jams on our way to Hayden Valley this afternoon.  The first was just past the Tower campground with a sow and cub grazing at the side of the road and a second near the turnoff to Artists Point.  Two cubs of the year climbed up a tree, but we couldn’t see the sow.  Both sightings lasted only minutes due to traffic and people not pulling over – that has been an especially frustrating experience this trip.

Hayden Valley was a little cooler than the northern Park, but that did not keep swarms of mosquitos from following us.  Standing in the the turnout near Alum Creek, we covered our heads with jackets and swatted mosquitos away while scanning the far hills and snow banks.  Two wolves from the Wapiti Lake Pack trotted down from the woods to feed on a carcass deep in a gully below a long snow bank.  One collared black wolf tore at the carcass as a second black trotted down from the trees to join him.  The collared wolf was submissive to the uncollared wolf, crouching as it approached the carcass.  A little later the two black wolves were joined by a gray wolf traveling from the south.  Looking at the wolf chart, the collared wolf might have been 1104F and the uncollared black, the beta wolf of the pack.  This pack has grown to 16 wolves, not including this year’s pups.  The pack lost 1091F in February to a bison injury.  She would have been 755M’s daughter, a great loss in the wolf world.  As large as this pack has grown, it would not be surprising if it split.  Some of the pack members were originally Mollies, another pack with a large number of wolves.  Last year the Wapiti alpha female denned in the western Hayden Valley and she has done that again, so the rendezvous site may no longer be near the Howard Eaton Trail.  So far no one has seen the Wapiti Lake Pack pups. 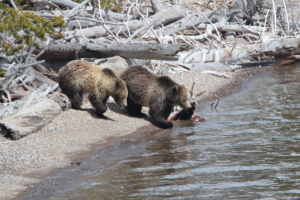 This afternoon we finally saw Raspberry and Snow, the grizzly mother and daughter that frequent Sedge Bay.  Raspberry is a large, beautiful brown grizzly while Snow is light colored, almost blonde; she looks like a brown bear with highlights.  When we saw them, they were walking along the lake and quickly went into the deadfall.  Both bears came out to sit on the shore and step into the water before ambling back into the trees for a long nap.  We watched them sleep for over an hour, maybe two, pointing them out to other visitors and showing them the bears through the scope.  After a long wait, both bears rose from their nap and walked into the lake until only their heads were above water.  When the bears had cooled off, they continued ambling along the shore and through deadfall, digging and sniffing.   We followed them as they crossed the road and climbed the slopes over the hill and out of sight.  Raspberry and Snow are an interesting and unusual pair.  Snow is 3-1/2 years old and still with her mother; we heard from a local visitor that Raspberry still nurses Snow.  Sows usually send their cubs away when they reach two years old so they can mate again, but this pair shows no sign of separating.  They may just like each other.

On the way back to Canyon we stopped at Alum Creek just in time to see a gray wolf traveling to the carcass, perhaps the same gray we saw earlier.  Far to the left of the wolf was a coyote, lying in the grass waiting for his turn at the carcass.

A lovely evening tonight.  I walked down by the corral and watched the wranglers unhitch horses from the stage coaches.  One of the coaches spooked a deer, then something else spooked one of the horses, who took off at a cantor.