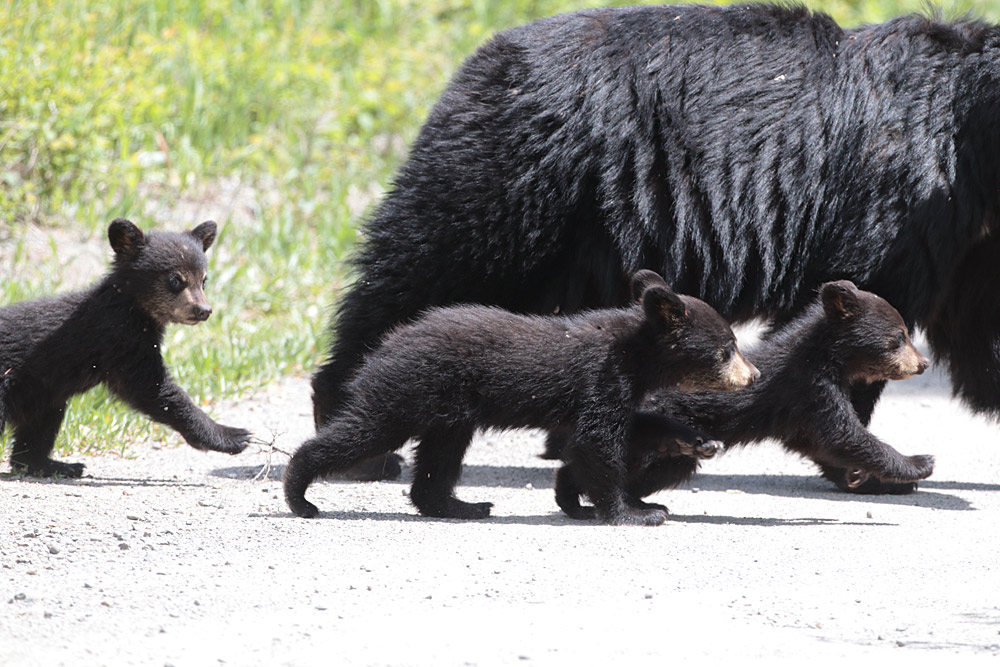 We were out the door at 6:30 a.m.  It was about 40º and the sun had already been up for an hour.  Off we went to Slough Creek to check on the Junction Buttes, but when it was obvious there was no wolf activity we continued around the corner; there on the hills above Lamar Canyon was a grizzly sow and her two coy grubbing in the grass.  Something spooked the sow and she quickly changed direction, heading up the slopes with her two tiny balls of fur loping after her.  “Time to go, kids.”  This bear frequents Lamar Canyon, so she was expected to follow Secret Passage over the hills down to Slough Creek.  Yet there are innumerable cuts and benches in those hills, plenty of places to hide from view. We quickly drove back down the Slough Creek road, but after waiting on the other side of the canyon the sow and cubs never showed. 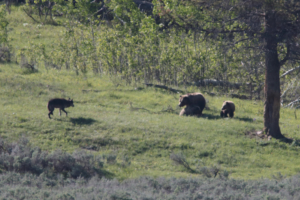 Since we missed a Lamar Canyon wolf crossing the road yesterday we headed to Lamar Valley again where a crowd was gathered at Hiker’s Bridge, spotting scopes set up and people searching the sage and rolling hills across the river.  Eventually a grizzly with two 2-year-old cubs appeared came out of the trees with 926F of the Lamar Canyon Pack nearby.  The bears found an elk calf lying in the grass and wolf and bears were fighting over the calf.

In spring, bears search the grass for elk calves who have no scent and are left hidden in the brush by their mothers.  I just couldn’t watch; I sat in the car where I hoped no one would notice how upsetting it was for me.  I understand the consequences of nature, but it doesn’t mean I want to watch.  And I’ll never forget the cow elk coming out of the trees to look for her calf.  The crowd breathed a collective “Oh” when they saw her.  926F tried to steal a morsel, but the bears kept her away, the mother grizzly chasing her.  The two young bears, so light in color they were almost blond, imitated their mother, charging at 926F.  After a while bears and wolves settled down and bedded and we went on to Hell Roaring trailhead to enjoy the wildflowers and allow me to decompress. 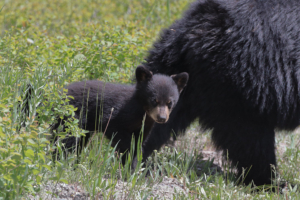 All week we have stalked the black bear sow with 3 coy at Tower.  Today she came to us, strolling into the fenced pastures of Roosevelt Lodge followed by her three tiny cubs.  We had just turned into the hotel drive when the bears ambled up the road toward the parking lot.  The cubs marched after their mother, keeping up through the fields of tall grass and wildflowers abutting the corral.

This afternoon we hiked to the Rosecreek acclimation pen, something I’ve always wanted to do.  This is one of the pens where the wolves brought to Yellowstone in 1995 were kept for approximately 10 weeks before releasing them into the Park.  This is known as a “soft” release.  The chain link enclosure is one acre and sits on a slope overgrown with grasses and wildflowers.  The pen was surrounded by a fence that stood 10feet high with a two-foot, 45-degree interior overhang to prevent the wolves from climbing out and a four-foot chain-link skirt along the inside edge to keep the wolves from digging out.  In addition, an electrical fence was constructed around each pen to keep out other wildlife.  Inside the pen were 4 wooden boxes used to crate the wolves when they first arrived.  Each crate was divided in two sections with doors that slide open.  It felt like walking through a monument or a sacred place.  Thunder rumbled in the distance as the sky darkened, threatening a downpour.  Drops began to fall so we hurried down the trail.  The rain held off for the most part until the last 5-10 minutes when we were pelted with cold drops, but we made it to the car without being soaked. 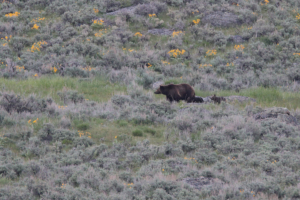 The rain let up quickly and we returned to Hiker’s Bridge where Small Dot was going back and forth from the carcass to the east.  He wanted to cross the road but was afraid to.  He would trot several yards, stare down some bison and the bears would chase him away from the carcass.  Finally, he got up the nerve to cross, loping across the pavement between cars while the crowds madly snapped pictures.

After watching Small Dot, we went back to visit the golden eagle on her nest in the cliffs above Slough Creek.  A good mother, she patiently tore something apart and fed her chicks, tiny balls of white that occasionally popped their heads up.

Tonight we sat on the Lodge porch and watched a storm roll in from the east.  Thunder clapped in the distance and long, jagged bolts of lightening lit up the sky.  Safe in the lodge rocking chairs, it was a beautiful sight.