When we reached Soda Butte Valley a bull moose and cow moose were facing each other about 10 yards apart, just standing there looking at each other.  It was not far from the place we saw the bull attacking the willows.  We waited for more interaction, but there was none.  When we returned later in the morning, the pair was lying a few yards apart in the grass near the tree line, both looking very content.  The bull is likely the same one we saw Sunday morning.  Obviously, he had calmed down quite a bit. 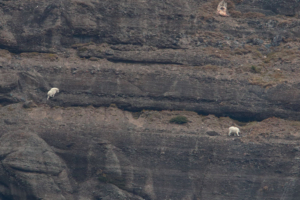 The Junction Butte Pack was back in the valley stretched out in the grass and sage with a carcass nearby.  At first, I counted six, but the number grew to 10 wolves including the three pups.  The wolves rolled in the grass and played with each other and slept.  When a large collared black came trotting in, a black pup rolled over on his back exposing his chin and pounding his tail against the ground.  The large black wolf was carrying a piece of meat in his mouth and dropped it, to the delight of the smaller black wolf who grabbed it and trotted off.  We heard some howling, but it was difficult to hear with the chatter of people.

The big surprise today was seeing the Crevice Lake Pack, an offshoot of the 8-Mile Pack.  We have never seen the 8-Mile Pack even though we searched and waited many times.  There were three black wolves and two gray wolves lying in the sage in what seemed a hundred miles away on the slopes of Hellroaring, simply dark lines against the sage and grass.  A sixth wolf joined them, a gray, but disappeared into the muted colors of the mountain side. 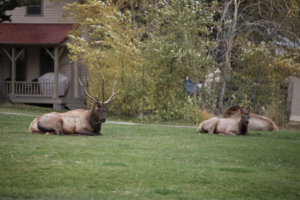 We finally saw three coyotes today hunting at the edge of the Lamar River.  From Dorothy’s they were tiny, barely visible.  The sun came out and retreated and we spent the rest of the afternoon walking around Mammoth and the terraces, watching elk and looking for pica. We hiked above the Yellowstone River canyon and walked down to the confluence of the Yellowstone and Lamar Rivers.  It was hard to know what the weather was doing – at 60º it felt cold with the wind blowing while at 58º it felt hot.