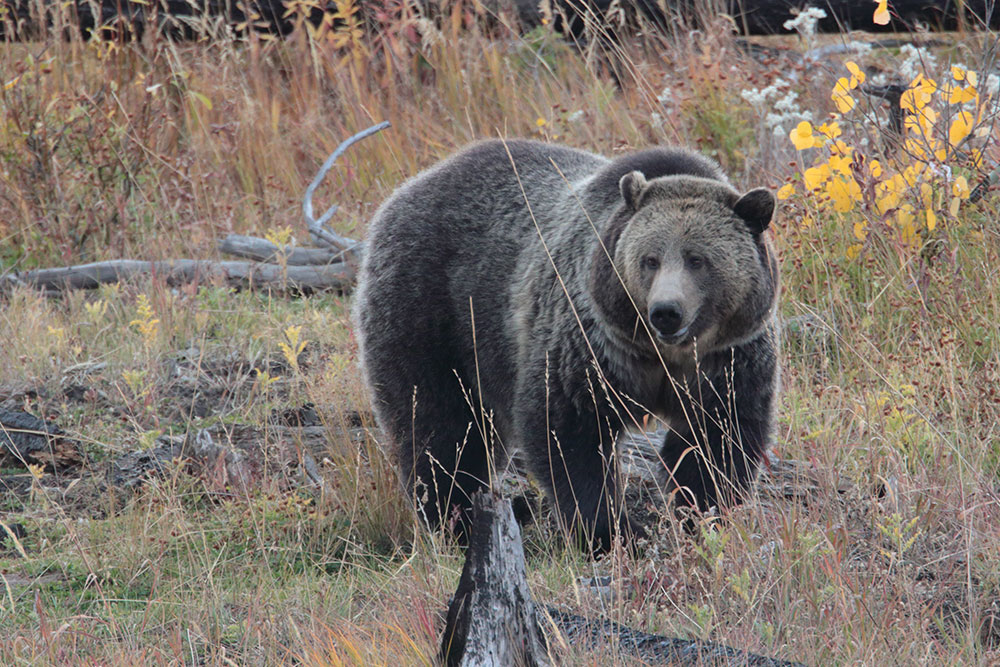 It rained early this morning, but by the time we drove into the Park the clouds lifted.  Lamar Valley was quiet.  Morning sun lit up the hillsides, the old Druid rendezvous and especially the cottonwoods.  The Junction Butte Pack was not in the valley; perhaps the pack was up Cache Creek hunting or back in the trees.  On such a beautiful morning where do wolves go? 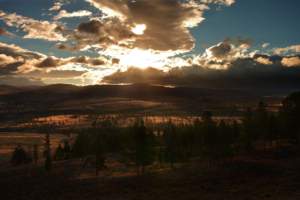 Little America was quiet also.  The aspen at long turnout seemed to change overnight.  Yesterday they were lemon yellow, shimmering in the breeze.; today they are wilted and turning a golden tan.  Still others in the Park retain their fiery yellow, even a bright red orange.

Above Antelope Creek we can look down into the valley on the back side of Specimen Ridge where we used to watch the Agate Pack.  It feels like you are high above Yellowstone.  The mountain slopes are still green here.  In a corner below Mt. Washburn, two bull elk spar with each other while another bull watches.  They are far away, but in my mind I hear their antlers clack against each other.  They stop, as if they know they are being watched and then continue.  The sky is brilliant blue and the silence lifts the peace of the valley up to us.

Dark clouds roll in over Dunraven Pass and the road to Canyon is blanketed in gray.  I wonder if we’re not making a mistake traveling away from sunshine and into rain, but by the time we reach Canyon, the clouds part, letting sun in and the temperature that sank over Dunraven Pass slowly warms at Canyon.

We look for the Wapiti Pack as we pass through Hayden Valley, stopping at Alum Creek and Grizzly Overlook.  The pack is not home, but in truth we don’t know their habits well and Hayden Valley is huge.  They could be anywhere here or even somewhere near Cascade Meadows.

Raspberry is grubbing in the deadfall along Lake Yellowstone.  She is quite the reliable bear for viewing and photographing.  A rich, dark brown, she looks healthy and well-fed over the summer as she pads through the deadfall, stepping over logs and walking on top of them.  One ranger commented that Raspberry had taught her daughter, Snow, the bad habit of staying near the road.  The ranger today has been in the Park since 1995 and again mentioned Raspberry was seen with a cub about 1-1/2 years old who seemed to disappear.  After that, Raspberry stayed near the road.  They don’t know what happened to the cub, but bear cubs are lost through all sorts of mishaps, particularly conflicts with boars.  Bear 264 stayed close to the road with her cubs; so does Quad Mom and the Junction Butte bear. 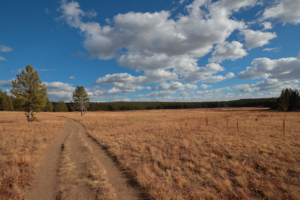 We stood along the road watching Raspberry as a cold wind whipped through the air and waited when she disappeared behind a ridge.  Being able to watch Raspberry for an hour and a half gave us time to appreciate her, watching her crawl over logs, scratch and dig with her powerful muscles and sharp claws.  How often do you have the opportunity to watch a grizzly?  Really watch them?

On the way back to Hayden Valley we spotted a coyote hunting in a meadow off the road.  We are getting luckier in our coyote sightings – four so far.

The weather changed quickly throughout the day.  It was cold and blustery at Lake, but warmed up to shirtsleeve weather at Mud Pots.  Then back to windy and cold in Hayden Valley and comfortably cool at Canyon.  One minute we were taking off our jackets; the next putting them back on with our hats.  We walked along Lake Yellowstone bundled up against the wind.  There was hardly anyone around the hotel area which is usually teeming with visitors.  We found lots of fox sign and some coyote or wolf sign.  I love this part of the Park when the season is winding down.  It feels like we are the only ones here.

It’s been a while since we hiked the Cascade Lake Trail and today turned out to be the perfect day for it.  We began at the Dunraven Road side instead of Cascade Meadows where the trail winds through tall, skinny lodgepole pines and opens up to a series of meadows filled with willows and tall grasses.  Cascade Lake lies in the middle of a pine forest, some trees which burned years ago.  The new trees are now a good size and bright green.  There was at least one well-marked backcountry campsite neatly set back with its own horizontal pole for hanging food.  All through the hike I thought what a beautiful place this is and how much I love this time of year in the Park with its soft afternoon light.  All around us the Park is getting ready for winter:  the bears stuffing themselves, pica storing grasses, elk and bison growing their winter coats.  On the return trip a flock of bluebirds flew up out of the meadow and swirled away in the afternoon sunlight.