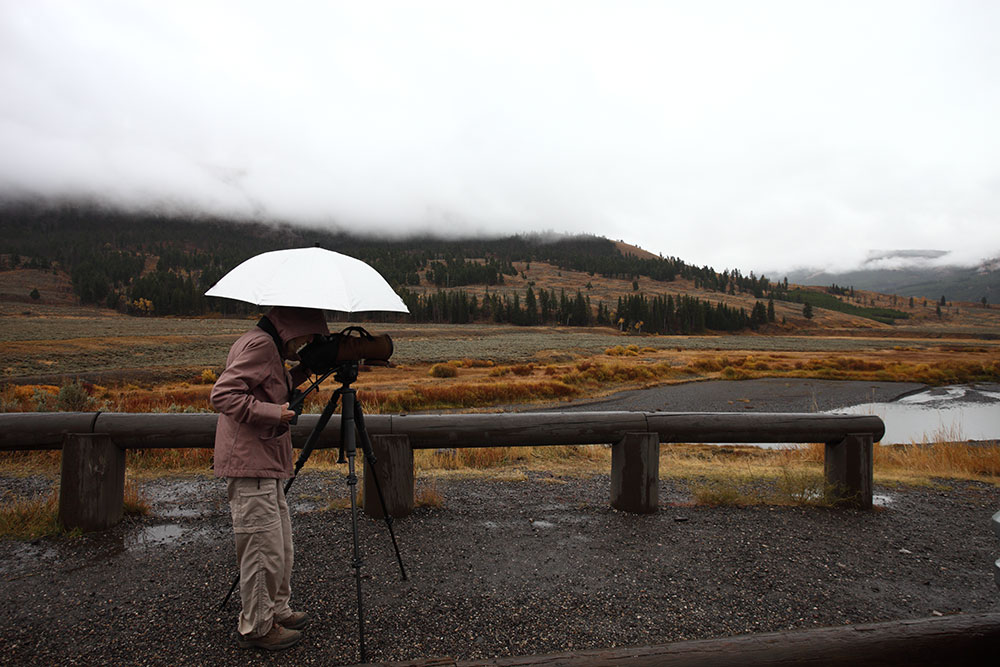 It rained all day today.  All day.  We did not expect that; we thought there was 20% chance of rain, 28º – 50º, and cloudy.  But hat weather report was printed almost one week ago.

All three Junction Butte pups, one gray and two black, played in the rendezvous site, oblivious to the steady rain and wolf watchers who stood at their scopes, holding umbrellas and covering their scopes with rain jackets.  It was cold, 40-42º and with the dampness, the cold sunk in.  The pups were restless, probably waiting for the rest of the pack who were off hunting.  There must be some wolf communication that instructs pups to stay put, but these three did not.  They headed east and were soon seen across from Hitching Post and Footbridge on the slopes and flats below Dead Puppy. 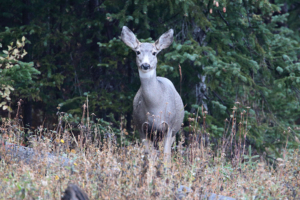 They wandered around the sage exploring and were soon distracted by a pair of backpackers.  Tim and I watched the backpackers take off from Footbridge and wondered aloud how anyone could take off backpacking in such potentially disastrous weather.  At first the pups were curious, but then they headed back to the rendezvous.  It was if they said, “Uh oh!  Mom told us to stay home and now we’ve run into these scary things – we better run back.”  We drove from Trash Can to Footbridge to Trashcan second-guessing little wolf minds and at least this time getting it right.

Off and on the rain continued.  We went as far west as Hellroaring to look for the Crevice Lake Pack, but the mountainside was completely socked in by fog.  We wound up returning to the cabin where we made pancakes and read.  But we couldn’t stay put.  We drove through Cooke City and up the Beartooth Highway.  At first it drizzled lightly.  We stopped at Beartooth Lake and walked around the campsite and boat launch until the rain started falling heavily and we drove up the road.  The Beartooth was deserted except for a few cars and a construction crew working on the road.  It was hard to see anything in the heavy rain and when it started to sleet, I insisted that we turn around.

The rain let up as we drove east and the sun came out briefly.  We walked around Clark’s Fork picnic area and stopped to look for pica along the road where a small group of mule deer watched us.  This area just outside the park seems wilder, maybe because of the absence of people and services.  There are numerous signs warning about bears and an area around Granite Lake has been closed due to human-bear conflict.  Years ago, when the Park was closed for the government shut-down we explored this area and it felt the same way then, despite the area’s beauty. 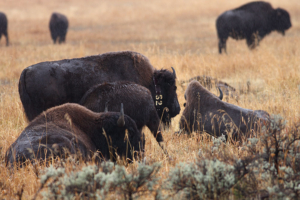 When the rain finally stopped, I walked around Silver Gate.  There is a large plaque near the meadow of willows where moose are often seen detailing why the area between Silver Gate and Cooke City is popular with moose – it is an easy source of food.  The meadows are a beautiful blend of gold, orange, red and green.  Snow began to cover the mountains.  Down the road where the foxes used to den there are four horses living in an improved corral.  They whinnied, waiting for their dinner.  I walked up and petted each one, but they really wanted hay or grain.

It’s raining hard again now.  They are closing the Beartooth tomorrow and Dunraven on the 9th.