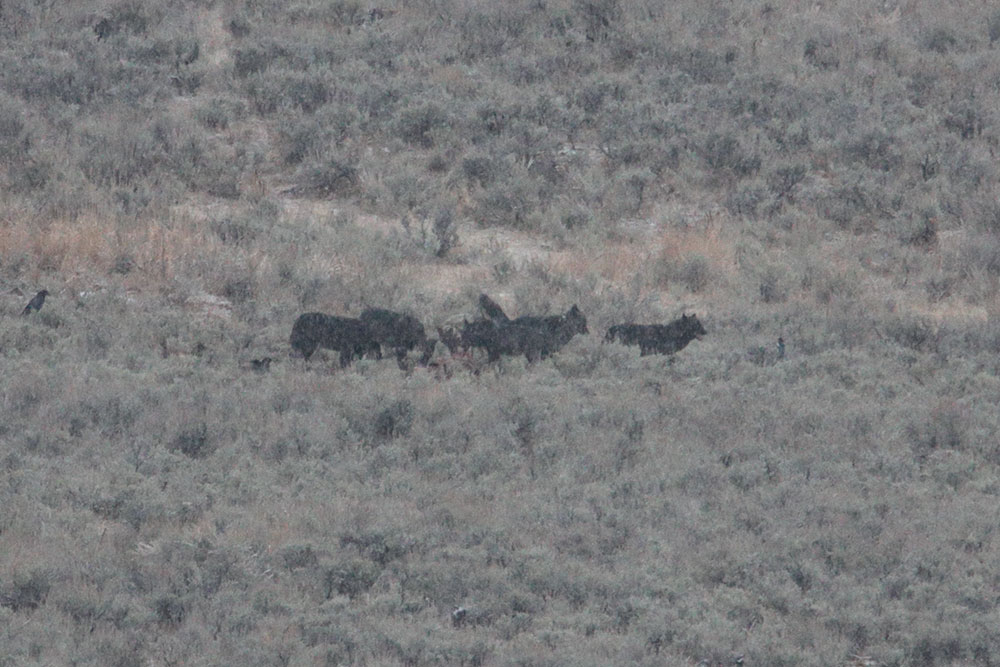 It was snowing when we entered the Park, a light snow that never stopped completely, slowly changing to flurries and then warmed to rain.  The whole day an icy dampness hung over us.  At Lower Barronette a moose with a calf hid in the trees.  It must have been the same moose we saw yesterday morning walking up the slopes into the trees.  The calf stuck close to its mother as they nibbled on willows, at one point lying down.  Both were difficult to see in between the pine trees.  The mother was like a large dark shadow in an already dark, cloudy morning.

Lamar Valley was strangely quiet.  A few people looked through scopes from the hills at Trash Can watching or looking for the Junction Butte pups.  It wasn’t until we passed the aspen grove in Little America that we saw crowds lining the roads and people standing on the low hills.  The Junction Butte Pack adults were feeding on a carcass on the south side of the road.  There were six wolves – two gray and four black bunched together.  Even though snow was falling fast and heavy, people were out there glued to their scopes, sometimes with umbrellas or towels to protect their optics.  Two golden eagles watched from their perches on a boulder while a bald eagle circled above. 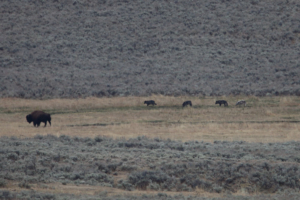 I was in and out of the car watching the wolves or catching up with friends.  It was cold – 35º – and wet, but good to see the adult Junction Buttes back after a few days.  When it finally became too cold we drove to Hellroaring to look for Pica again.  There is so much talus there in huge mounds like mountains, yet we didn’t see any Pica until we crossed the road.  We heard the little fellow before we saw him.  Once out, he was very cooperative, jumping around and remaining visible for quite a while.

The snow let up a little so we returned to Little America and wolves and watchers were gone.  The Junction Butte Pack adults had moved on to Lamar Valley where they joined the pups.  There were some joyful greetings with lots of tail wagging and submissive behavior on the pups’ part – licking lips, rolling over.  I counted ten wolves including the three pups, three gray and seven black.

We backtracked a little more, stopping at Round Prairie and Soda Butte picnic area.  Even on a cloudy day the combination of orange, red, yellow and green is striking.  Slowly we made our way back to Mammoth, scanning the slopes at Hellroaring which was a much clearer view today than Tuesday.  Despite the weather we were able to get out of the car and walk around a little.  The Mammoth elk herd was in true form, cows lying on the hotel and courthouse commons, bulls patrolling their harems.  It’s a sight we look forward to each trip, especially in the fall. 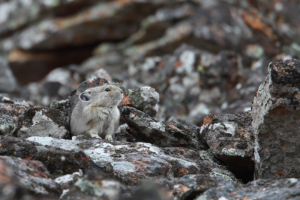 Twenty years of Yellowstone.  My first trip to Yellowstone was in September 1998 and twenty years later I am falling in love with the park all over again.  I came to Yellowstone to see the wolves.  I caught a glimpse of the Druid Peak Pack traveling west along the tree line in Lamar Valley and I just came coming back.  I learned about different packs and individual wolves, following them as best I could in two trips a year.  A few years later Tim joined me and became hooked, expressing his love and passion for the park through his photography.  Our enthusiasm grew into the Yellowstone Experiences website and a connection to others who love Yellowstone.

Ecological changes are evident everywhere.  Now there are fewer wolves and fewer sightings, but perhaps that is simply evidence of a certain balance developing.  Though elk numbers are up from last year, the herds that covered the Lamar Valley years ago have been replaced by bison.  We see fewer coyotes and more moose and bears.  Aspen, willows and other plant life thrives.

This trip was different for me in another way.  I did not feel obligated to have a “Yellowstone Experience” others would want to read about.  I kept my journal as I always do, but if we drove around and didn’t see a wealth of wildlife – well, so what.  I thought about why I come to the Park and it’s because I just like being here.  So that’s what we did.  Just be here.  It was an exercise in mindfulness that helped me appreciate the Park for everything it is, in all conditions.  In the middle of cold, drizzly weather I marveled at the vibrant contrast of red and yellow, orange and green.  The way sunlight draws a horizontal line on Lake Yellowstone in the late afternoon.  Watching a grizzly rip roots from in between deadfall for hours while an icy wind burned my face.  Clearly, I am not ready to leave.