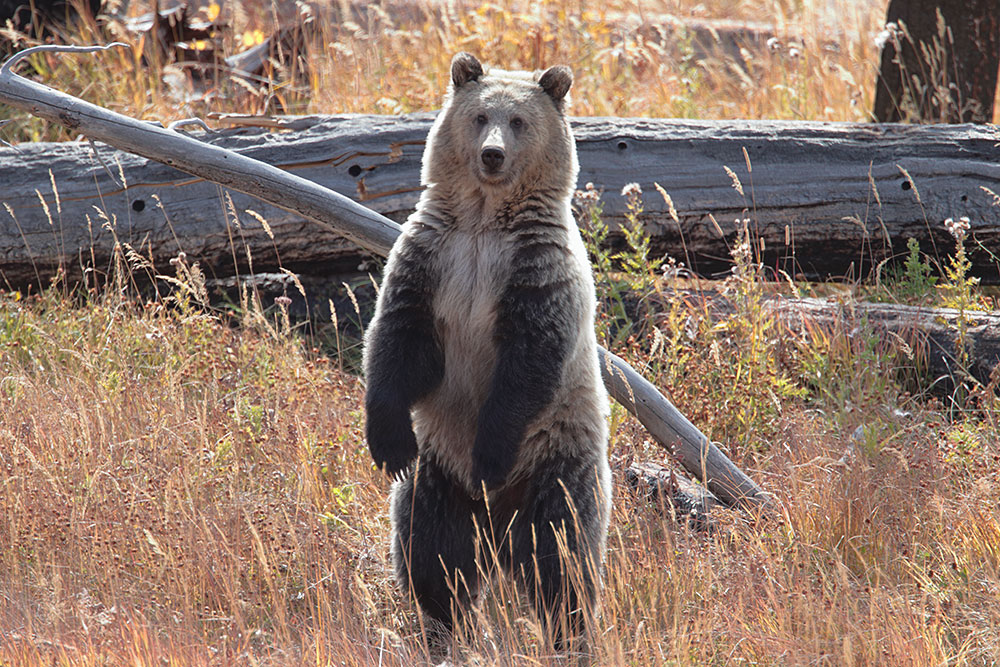 Fog hung over Silver Gate this morning, extending to Lamar Valley and beyond.  It eliminated visibility, but wolf watchers stood vigil at all the turnouts waiting, hopeful.  In the meantime, a herd of bison entertained us at roadside, snorting and huffing.  The calves, now five or six months old, have changed from a rusty brown to chocolate.  A large bull scratched his belly on a log placed to keep parked cars away from the grass while other bulls herded their cows and offspring to safe pasture. 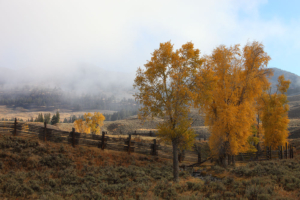 Morning light illuminated the hills, the cottonwoods, and aspen.  We walked down to the Lamar River where the water looked low enough to walk across the gravel bar to Jasper Bench.  The narrow leaves of the cottonwoods here are now a bright yellow.  A harrier hunted in the tall grass and perched on a log while a bald eagle flew large circles above us.

The fog finally lifted revealing a perfect blue sky.  A good day to go south.  Surprisingly, Dunraven Pass and Mt. Washburn were clear of fog and we drove all the way to Lake Hotel, enjoying sunshine and warm temperatures.  Just as we came around the bend at Mary Bay a group of mule deer crossed the road with their fawns to drink out of the small ponds between the road and the beach.

We headed on to Lake Butte Lookout, but a parking lot filled with photographers stopped us.  Snow, the young grizzly we saw in June, was grubbing in the deadfall below the lookout.  As large as her mother now, she is a creamy white color with a charcoal gray rump and legs and hump.  She looks like she stepped in soot; her ears are a dark gray also.  Snow clawed at the ground and walk along logs, aware that she was being watched by a crowd.  At one point she stood up on her hind legs and looked around as if straining to see us. 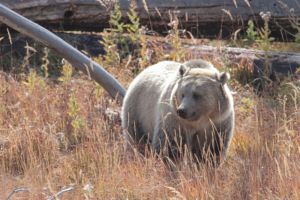 Farther up the road her mother Raspberry grazed in another meadow of deadfall.  According to one of the rangers, she is about 12-1/2 years old now according and has had two sets of twins.  Snow’s twin was a male who has not been seen since he was about 1-1/2 years old.  Raspberry separated from Snow at the end of June this year and was visited by a few males, so there may be another set of twins next spring.

We hiked behind Lake Butte lookout to get a view of Pelican Valley and see if we could find the Mollie Pack.  The Butte is sandy and littered with deadfall and we had to climb over fallen lodgepole pines.  Some trees are still standing, but charred black from fires.  Pelican Valley stretches out in the distance, a long expanse of golden grass.  We could even see Turbid Lake.  It is a very distant view from there, but puts in perspective how vast Pelican Valley is.  A sea of conifers lies to the east, a wilderness unmarred by any development.  From the store at Fisherman’s to the east entrance there is nothing but wilderness and only one road through it.