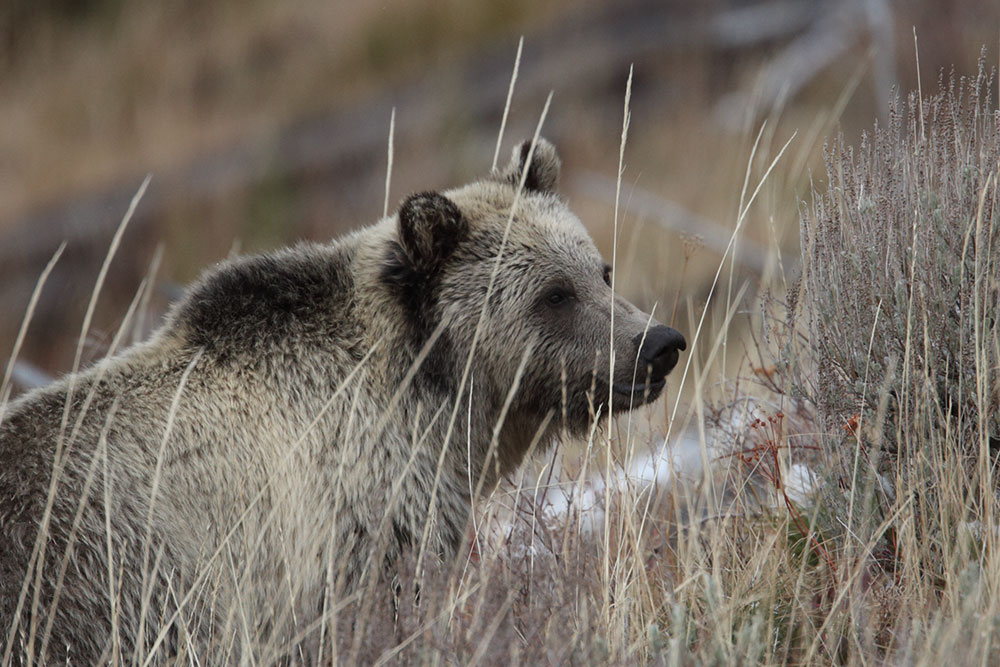 Snow covered vehicles and dusted the mountains this morning.  It was not surprising after yesterday’s rain and cold weather.  The temperature hovered in the 30s all day, not rising above 42º.  We caught a glimpse of a bull moose in the willows at lower Barronette, but did not stop.  When we returned later we saw him climbing the slopes into the trees, but even after traipsing into the meadows, we couldn’t find him. 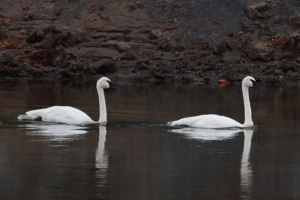 The Junction Butte pups were right where we left them yesterday milling around, playing, jumping on each other and rolling on top of and underneath each other.  Just like dogs.  This morning an adult or subadult was baby-sitting, a black wolf identified as a male.  He went off to the side in the sage keeping an eye on the pups, but for the most part staying out of their antics.  It’s been a few days since we’ve seen the rest of the pack and I wonder if the pups are getting hungry.

We thought we would have another rainy day, but the clouds parted letting the sun in.  There were still snow flurries throughout the day and the temperature stayed in the 30s for most of the day.  We hiked the Yellowstone River trail for a long stretch where the weather was chilly.  No sheep or bears or marmots, but swallows swirled around the pine trees at the edge of the trail and a group of 9 antelope grazed the slopes along Specimen Ridge.

Snow and ice closed Dunraven Pass for the morning; when it opened the road was still wet and icy in some places, particularly near the Dunraven trailhead.  I drove slowly, worried about the ice and was glad to reach Canyon Junction.  Just south of the junction a bull elk grazed with his harem of 8-10 cows.  He strutted and whistled, herding them around himself until a much larger bull elk walked in, gathering the harem.  The first bull slunk off as the larger bull circled the cows, obviously the original “owner.”  There was some whistling from the other side of the road where elk were bedded in the trees and grazing in the meadow where another bull elk appeared.  Two separate harems with a good number of cows.  The cows have such pretty faces and it was nice to watch the herds from a relatively short distance. 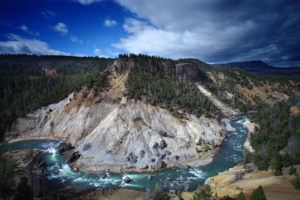 We stopped to look for the Wapiti Lake Pack again with no success.  We checked the normal spots like Grizzly Overlook and even the slopes across the road.  We’ve been here a week and haven’t seen them once.  Where does this large pack go?  And they are a large pack – 16 adults plus this year’s pups.  How could we miss them?  We stood there scanning their new rendezvous while we shivered and our faces burned from the icy wind.

If the wolves in the south are unreliable, Snow and Raspberry are not.  Snow was grubbing in the deadfall on the slopes beneath Lake Butte Overlook.  She climbed the hills, stepping over logs, making her way to the top where the lookout is.  Photographers scrambled into their cars to keep up with her and a Park ranger trailed after them, shouting to stay back.  When Snow had almost reached the road, she blew a horn to haze Snow across the road.  I stood away from the fray, enjoying the afternoon light on Lake Yellowstone, a line of light shining in the middle of the water. 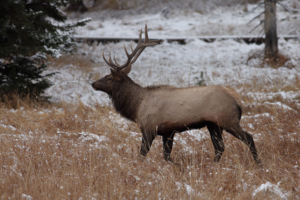 The wind was icy cold and I was glad to head back.  I did not want to get stuck on an icy road over Dunraven.  The road was much better on the return trip having been driven over by more vehicles.  We looked for fox and finally one crossed the road in front of us in Little America.  He was a combination of tan and gray and held his head up as he trotted across the road.

The Junction Butte Pack pups and baby sitter were still in the rendezvous horsing around when a dark brown grizzly ambled out of the woods and walked right up to the pups.  The pups hardly reacted, simply walking back and forth and around the bear, who sat down on his rump with his legs stretched in front of himself.  It was a comical sight.  At one point one of the black pups laid down beside the bear while the babysitter lay in the sage, undisturbed.  It was if the wolves and bear knew each other.

It seems like winter is inching its way into the Park.  I love the quiet, the slowness, the feeling that we are the only ones here.