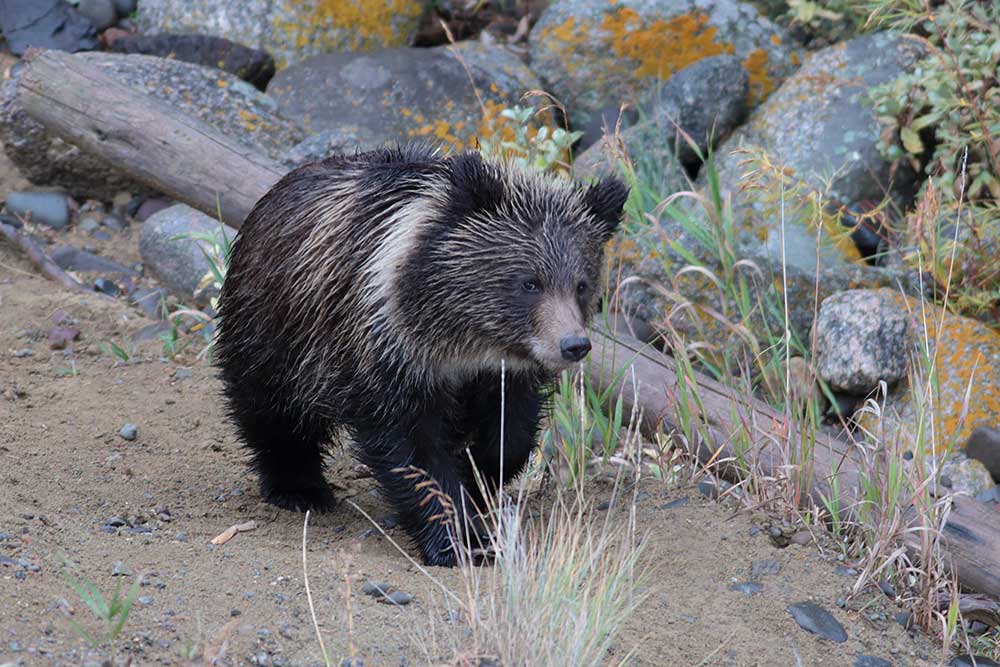 Today’s weather reminded us of what fall weather could be like in Yellowstone.  If we had more time, we would have retreated to the cabin for pancakes, but we were checking out, so we packed up and headed into the park as usual.  It rained all the way to Lamar Valley.  We stopped at Soda Butte picnic area, just to look around, and because it is one of my favorite spots in the park.  Beautiful fall colors everywhere; orange to red, yellow and gold, contrasted with deep green.

The Junction Butte puppies were out near the Confluence, ignoring the rain.  It didn’t seem to bother them as they play-fought, chased and jumped on each other.  Though the pups are curious about everything surrounding them, they stayed in the rendezvous site.  For wolf watching, they are a very reliable group.  It was barely 38º and wet, and I had a hard time staying outside the car.  I shivered so much I couldn’t hold binoculars without shaking. 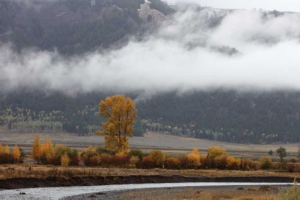 We spent most of the day going back and forth, checking on wolves and other wildlife.  It was hard to stay out in the elements looking through a scope for very long so we spent part of our day just watching from the car.  From the Institute we watched a grizzly sow lead her two cubs across Amethyst Bench, stopping to nibble on the nutritious grass.  These cubs were two-year-old, cubs who just spent their second spring with their mother.  Next spring will be their last with her and she will send them out on their own.

The rain let up slightly and the sun tried to come out, but the temperature still hovered between 36º and 38º.  As we crossed Lamar Canyon, we could see lines of vehicles parked along the road in Little America and people crowding near the bridge.  We found a spot and got out to see what the commotion was all about.  The Junction Butte bear was foraging in the grass and sage only about 10 yards from the road.  I couldn’t believe the bear was that close – and that people were standing so close.  I crossed to the opposite side of the road where I could still see the bear just fine with my binoculars until she started moving around.  She had a cub with her who padded after her along the rocky edge of the river and under the bridge.  He was the most beautiful cub I’ve seen in a long time, a rich brown with a blonde collar.  Streaks of gold running through long dark fur that waved in the icy wind.  The two bears made their way along the river, foraging in the grass, climbing over boulders.  The sow stood up at one point, spooked by one of the photographers who was following her; otherwise she seemed undisturbed by the crowd, as if she had been through this many times before.

We made one last trip up Tower Road where the same black bear who strolled through the General Store parking lot was nestled in between two fir trees growing on the rocky cliffs.  All we could see was a mound of black fur and occasionally an ear.  Visitors crowded the narrow road and turnouts, craning their necks, trying to imagine this black spot as a bear. 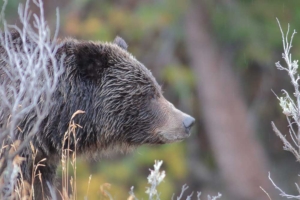 For a rainy day, we were having incredible wildlife viewing, but it’s strange that we’ve seen so few elk this fall.  Aside from the herds at Hellroaring and Blacktail, our sightings have been few; only a few cows and calves and hardly any bulls.  I miss hearing them bugle.  Even at Mammoth the resident herd seems to have dispersed.  A few cows walk around the hotel and graze near the terraces, but the large harems are gone.  It may have something to do with the hotel renovation and all the construction activity over the past year or so.

Winding down the road to Gardiner, there are more elk on the hillsides.  A group of cows herded by a huge bull.  He struts about and pushes them down the slope as another large bull appears.  We hear him bugle before the two bulls clash, crashing their antlers together.  The rut is one of fall’s rituals in Yellowstone and it can be violent.

The pastures in Paradise Valley are scattered with grazing cattle, horses, deer, pronghorn and elk.  Though the temperature has risen slightly, there is snow on top of the Absarokas.  A wave of clouds dusts the trees and slopes with frost.  Rain turns to snow as an icy wind blows sheets of white across the highway.  Once over Bozeman Pass, the weather clears a little and snow turns back to rain.