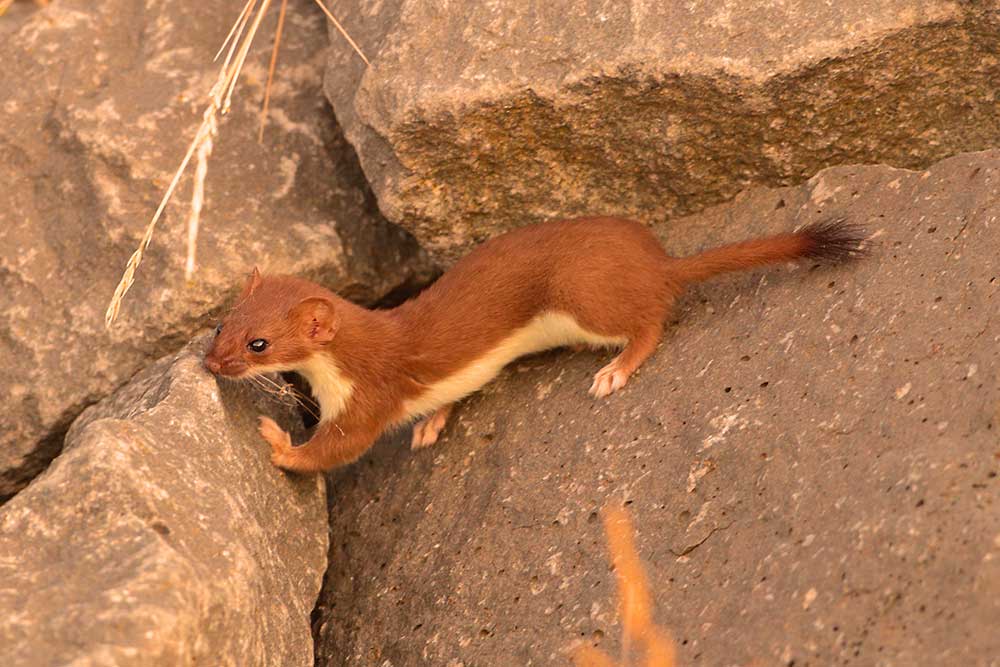 This morning a large crowd was gathered at the Confluence where a porcupine was ambling along the rocky shoreline, picking up twigs at the edge of the creek.  He waded into the rushing water, hanging on to rocks to steady himself.  At times it looked like the current would drag him away, but somehow he made it to the other shore where he crawled up a willow and began munching.  At the same time, on the opposite rocky bank, a weasel crawled in between rocks and squeezed into crevices.  Brown with a white belly and smaller than a squirrel, he seemed tiny.  And he was fast!  Darting in and out before you realized what you saw.

The Junction Butte adults returned from their trip to Hellroaring, bedding in the Druid Peak Pack’s old rendezvous site and spreading out along the tree line.  Since most of the wolves were bedded in tall grass and almost invisible, we continued to Blacktail where we thought we might drive Blacktail Road, but it was closed.  Across the road a herd of elk was bunched up together as they were a couple of days ago.  A visitor who was watching the elk told us wolves were seen there earlier in the morning, probably the Eight Mile Pack, but the wolves ran off when they were spooked by something.

It was a perfect day to hike the Slough Creek Trail.  The trail is actually an old wagon road that leads to Silver Tip Ranch, a private guest ranch located just north of the park boundary.  The ranch still shuttles guests and supplies to the ranch via horses and wagons.  The trail climbs up gradually through a forest of pine trees and aspen, gaining 400 feet in elevation over 11 miles.  Growing along the trail is wild rose, also known as rosehips, a favorite food of many bears.  We found both bear tracks and wolf tracks in wagon ruts along the trail.  Slough Creek curves through the meadows like hairpin turns.  At the second meadow we stopped and rested on a boulder next to the creek. 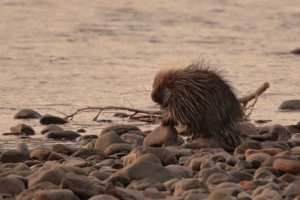 The aspen and cottonwoods are beginning to change color here.  The young aspens are particularly brilliant, their leaves shimmering in the light.  As we left Slough Creek, two black bears were foraging on the slopes above the creek.  They looked smaller than adults, but it was difficult to tell if they were yearlings or adults at that distance.

On our way out of the park we stopped at Round Prairie once again.  The sun had just set and we could barely see in the evening light.  A cow was grazing in the willows near the woods when three bulls appeared far off in the meadows.  One bull began chasing the two others, but by that time it was too dark to see anything.