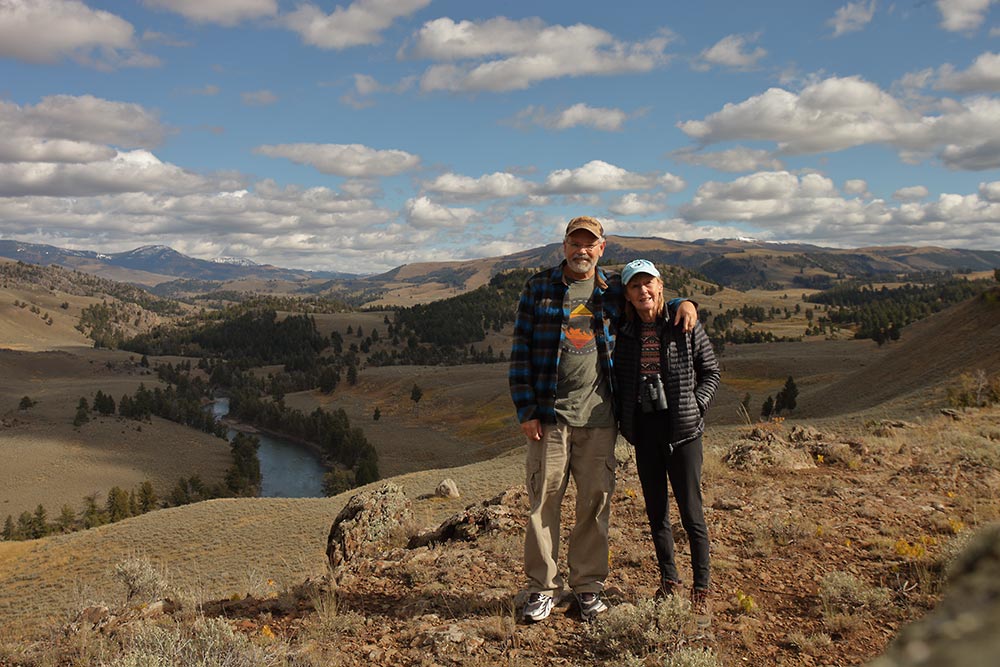 Yellowstone is gradually settling into fall.  As the light changes and the temperature falls, mountain slopes and valleys slowly turn golden even as snow dusts the peaks of the Absaroka range.  The Junction Butte Pack has moved into Lamar Valley.  Last spring the pack localized in Little America above Slough Creek where they bore litters in dens used for several years.  Some pups did not survive and some pups were moved in early June to another location.  Fortunately, seven pups – from 969F and 907F or the uncollared female (who is now the alpha female) – survived, six black pups and one gray.  1109F denned on the south side of Specimen Ridge and brought three pups to the pack, all black like herself.  Those pups are supposedly smaller than the “main” pack’s seven, and some wolf watchers think they did not get as much food.  For wolves, carrying food up Crystal Creek drainage is a strenuous and time-consuming task.

This morning the pack was on a carcass near the Druid Peak Pack’s old rendezvous site.  A mound of wolves huddled on top of a rise, tearing at something, their heads down, their tails up.  Later we learned the carcass is a bison, but not sure if it is a casualty of this summer’s rut or an actual wolf kill.  It was a flurry of black fur with some gray against a backdrop of sage and yellowing grass.

We left the Junction Butte wolves for Little America where a black bear sow and her two cubs of the year were foraging on the wooded slopes south of Junction Butte.  They crawled over logs and between pine trees, grabbing the last of summer’s grass and pawing for ants.  The cubs are a good size, healthy looking.  They will make it through the winter.  Up Tower Road in the meadows bordering the campground another black bear was working on his fall feeding frenzy.  This bear was a large boar, ambling through the tall grasses, pulling at roots, getting ready for winter, then curling up at the base of a tree for a morning nap.

Leaving the bear to his nap, we drove up to Antelope and parked in a turnout overlooking the wide expanse between Specimen Ridge and Mount Washburn.  Somewhere here 1109F of the Junction Butte Pack denned.  The valley is a stretch of forests and streams that goes on forever.  In the far distance I spot a solitary bull elk.  Bison dot the grass and sage below us.  I follow Specimen Ridge with my eyes from west to east, focusing on one place, the spot where we hiked last June and looked down on where we stand now.  We used to watch the Agate Creek Pack from this place.  So many wolves, so many years, so many changes. 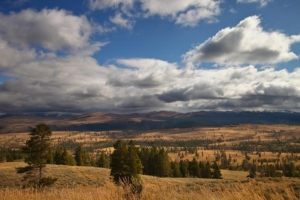 When we make our way back to Lamar Valley the Junction Butte wolves are still there, this time traveling west toward the tree line.  Though the wolves are strung out, they are still difficult to count.  At one point we get eleven, but there may be more since we believe many of these wolves are pups.  They romp and play, tails wagging in youthful energy, a canine dance.  I hear a faint howling as the pack makes its way up the sloping edge of the trees into the forest.

We take a break and walk along Soda Butte Creek towards Round Prairie where the creek meanders softly through the tall grass and past gravel shores.  A fisherman casts his line.  I look north to Druid Peak and south to the hillsides where I’ve watched the Druid Peak Pack and Lamar Canyon Pack so many times.  In particular, I remember the last time I saw 926F, now gone.

When we stop for lunch at Yellowstone Picnic area a fat raven joins us.  Each of his legs is banded, one white, one yellow.  He is bold, hopping up on the bench and peering over the table, surveying the menu.  Then he hops on the table and I shoo him away with a flip of my hand.  Enough!  It’s my instinct to allow him to stay, but feeding him or allowing him to steal tidbits will do him no good in the future.

Later this afternoon we walk part of the Garnet Trail loop and just sit on top of the river canyon, gazing across the Yellowstone River.  The hillsides and rocky slopes to the north are studded with pine trees and stands of conifers.  We have seen black bears on those slopes in past years and hope to see mountain lions.  Bluebirds flit through the air and perch on boulders, watching us walk by.  This morning it was 38º, cloudy, and damp.  Now it is 60º.  When I look around in all four directions, I think of how old this place on earth is and wonder how much it has changed over thousands of years.

The Junction Butte wolves are still at the carcass site at 5:30 p.m.; at first only one black wolf, pulling at the carcass.  Then a gray.  A black wolf trots toward the carcass from the west.  A wolf here, a wolf there, one standing, one bedded.  They are too hard to count, but we know more wolves than we can see are there.