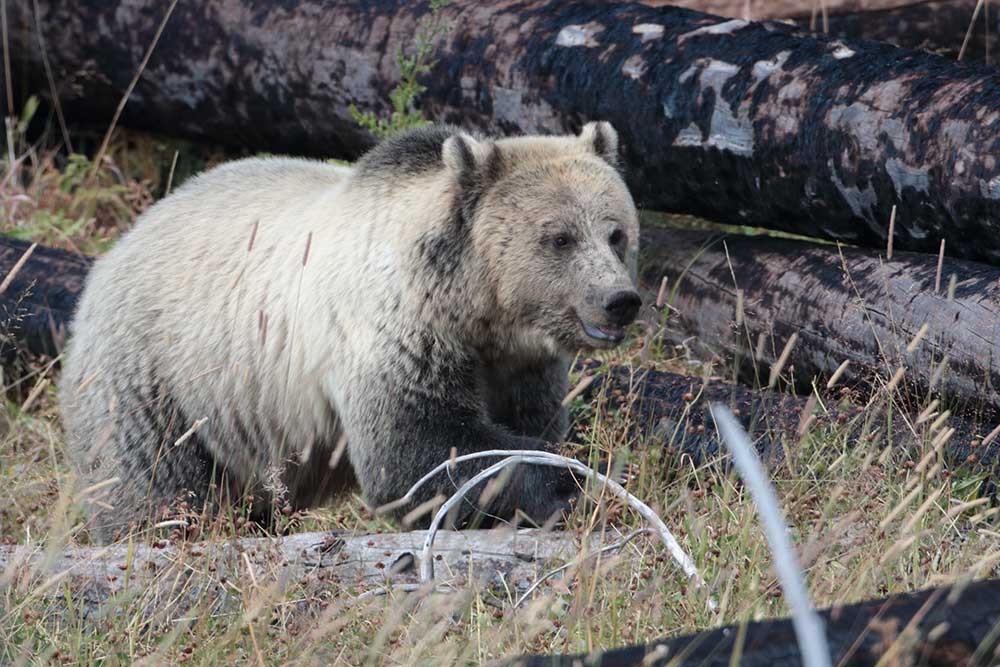 A frosty mist covered the windshield when we took off this morning.  The morning light was still dim when we spotted a large figure weaving through willows and trees east of Barronette Peak.  The bull moose stepped quickly through the brush, lifting his long legs in an almost graceful gait.  Finally, he stopped, staring at us for a long minute before moving on.

Vehicles lined the road in Soda Butte Valley on both sides.  There were people with spotting scopes standing on hillsides, in turnouts. and in the sage; my first thought was the Lamar Canyon Pack was back.  We squeezed into a space along the road and hiked into the sage flats toward the river.  There was a carcass on a gravel bar in the creek with several ravens flying up and down.  Three black wolves were running and falling over each other, climbing the bank, sliding down.  They sniffed in the grass while the ravens dove at the carcass; another black wolf lay bedded on the river bank watching.  It was 1109F and her pups and the pups were having a great time exploring and playing.

1109F got up and the pups and their mother began moving toward Lamar Valley, the pups bouncing along while 1109F kept a slow, steady pace behind.  As they neared the woods opposite Soda Butte Cone a gray wolf dashed out of the trees and pinned 1109F.  We later found out it was 969F, who was the alpha female of the pack a few years ago.  It was as if 969F grabbed 1109F and said “Grab your kids and let’s go.”  The pack had made a kill and now it was moving on.  We followed the five wolves as they traveled quickly through the valley, catching up with the rest of the pack at the rendezvous site.  Wolves seemed to be pouring out of the trees.  The pups continued to play with endless energy while the adults bedded in the sage and grass.

As the wolf energy in Lamar Valley died down, we headed to Canyon and Hayden Valley to look for bears and the Wapiti Lake Pack.  Construction is still ongoing from Fishing Bridge to Indian Pond and driving is a slow slog through that area, though the finished road looks good and is a welcome improvement.  It took 20-30 minutes to get through the road construction to Mary Bay and Sedge Bay.  Turning the corner after Sedge Bay, we noticed the crowd below Lake Butte Overlook.  Snow was foraging on the slopes while another grizzly was spread out on a huge, dark mound – an elk carcass.  A ranger told us it was one of a succession of bears who had been to the carcass.  The boar held his place for a long time, lifting his head, sniffing the air, lunging at a squirrel.  Snow sat on her haunches off to the side, watching and waiting.  She is about 4-1/2 years old now and has grown into a large, beautiful bear.  Not wanting to tangle with the boar, Snow crossed over the top of the hill.

Clouds formed as we passed Sedge Bay and drove toward Hayden Valley.  Yellowstone Lake crashes against the shore in powerful rhythmic waves.  We look for the Wapiti Lake Pack again.  Someone told us they saw a black wolf walk along the Yellowstone River today that could have belonged to the Wapitis or the Mollies or even been a disperser.  The Wapiti Pack has grown quite large and it would not be unusual for a young male to spend more and more time away from the pack.  We drove up and down the road from end to end of Hayden Valley before giving up.

Dark clouds and rain settled over Yellowstone late this afternoon.  It drizzled as we crossed Dunraven Pass and the light was already beginning to fade at 5:25 p.m.  We worried for a cyclist riding past us in the opposite direction; wherever he was going, he needed to get there before dark.  Crowds in Lamar Valley had thinned from the morning, but people were still out with their scopes and binoculars.  By the time we reached Warm Springs it was raining steadily, the mountains surrounding Silver Gate turning white with snow.