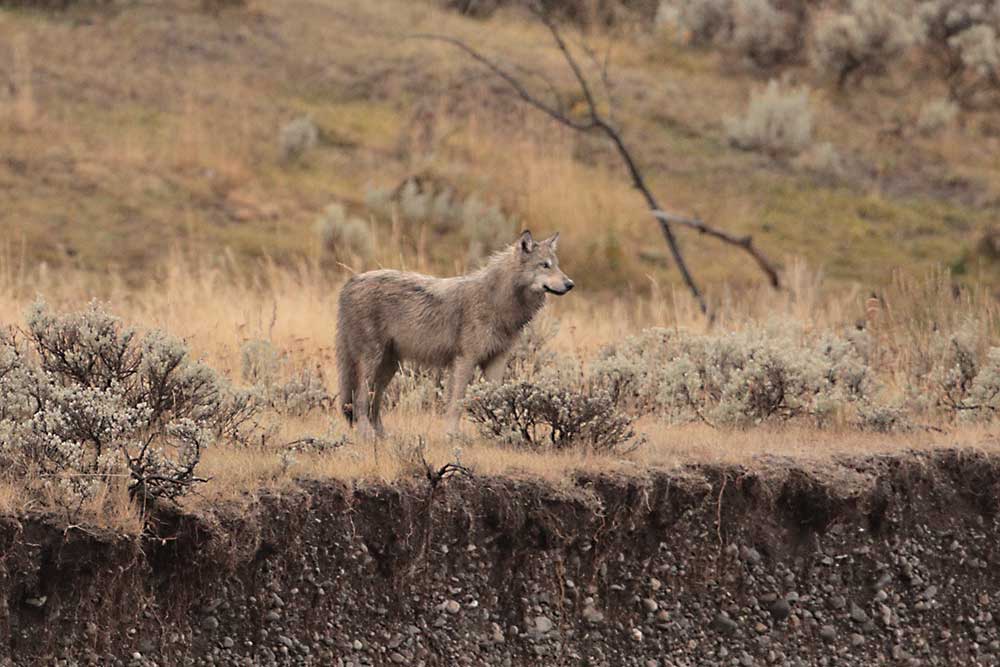 It drizzled as we left Silver Gate this morning, only a solitary patch of blue in the western sky.  A bull moose walked through the willows in Round Prairie at a slow, comfortable amble, his antlers wide, huge.  Approaching the Confluence, we spotted a black wolf on the grassy banks of the creek.  He trotted and stopped, sniffed through the grass and sage.  Another wolf appeared, then another and another and another.  Five of the Junction Butte pups exploring Soda Butte Creek and its steep, dark banks.  One black pup surveyed the distance from the top of the creek bank to the gravel shore, a height of about three or four feet.  Would he slide down or jump to reach the water?  Instead, he and his siblings continued their adventure trotting along the banks while what seemed like 100 visitors watched from the road and hillsides. 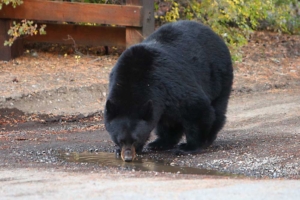 I climbed part way up a hill, watching the black wolf and his siblings.  It looked like they were going to slide down the banks to the creek and move toward the road.  I hoped they wouldn’t, and stood back to make the way clear for the pups to cross the road – if that happened.  But the five pups stayed on their side of the creek.  These pups are a joy to watch.  Just like dogs, they play, climb on each other, jump, play tug of war, chase.  Rain poured down in a steady stream and photographers and visitors gathered cameras and spotting scopes, racing back to their vehicles.

Clouds and rain threatened most of the morning.  We stopped at Dorothy’s and Blacktail Plateau to check for coyotes and wolves.  We have seen only one coyote so far this trip!  Since the Junction Butte Pack has moved into Lamar Valley, the coyotes may be lying low.  We drove through Mammoth where a bull elk kept watch over his harem of cows near the church.  We haven’t seen – or heard – many elk this trip, which is a surprise.  Our very first years in the park, elk were everywhere and could be heard bugling.  We stopped at the Hoodoos and Sheepeater Cliff where a pika and a weasel came out at Hoodoos and one pika at Sheepeater Cliff.  I often forget what a beautiful place Sheepeater is, especially in fall with Indian Creek running through.  All the changing colors of willows and grasses; subdued, yet striking.

Indian Creek campground was closed, but the trails that begin at the campground are open.  We followed Bighorn which runs through a large meadow adjacent to the creek.  It reminds me of Swan Lake Flats – open, going on forever, then winding back through a new growth forest.  It started to rain again, so we made our way back along the creek to the campsites. 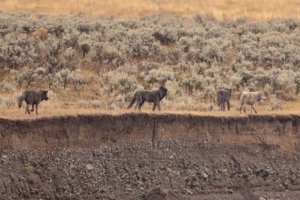 The forecast was for rain and snow today, but the weather cleared up shortly after noon and we headed south.  The big grizzly boar was still guarding the elk carcass at Lake Butte Overlook, stretching out over the dark mound covered with dirt.  He dug and pawed, dirt flying behind him, lying on the carcass, pulling it apart with his long white claws.

Another bear came down the hillside hoping to get a bite, but was quickly chased away.  This bear was a silvery, dusty brown.  He sat on the hillside on his haunches, walking away and over the top of the ridge when the dark grizzly lunged toward him.  Snow also returned and like the other bear, was chased away.  She, too, went over the hill to the slopes on the other side where she foraged in the grass and deadfall.

The weather held so we watched the bears for a long while before weaving our way through Hayden Valley.  When we reached Tower, a black bear was walking through the parking lot.  Visitors huddled near the restrooms and along the rock wall as the bear strolled past the General Store, nibbling on grass, drinking out of a puddle and crossing the road.