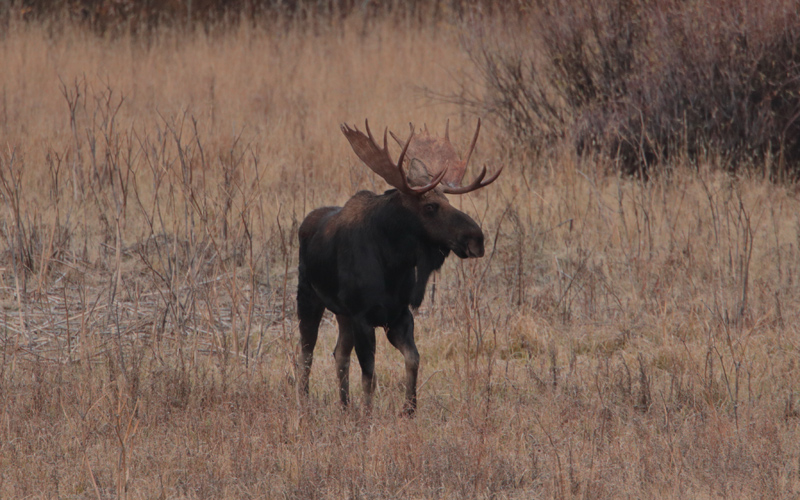 The weather has not been cooperative.  Snow again today; sometimes rain.  And cold – 30-40◦, and windy.  We leave Silver Gate and enter the Park in a whirl of grainy snow.  It is winter here, despite what the calendar says.  Pine branches are coated in white, the mountains and grassy flats of Round Prairie and Lamar Valley dusted with snow.

Near the skyline just west of Crystal Creek, seven wolves are bedded under a single conifer.  They sleep scattered among rocks and indeed the wolves could very well be the rocks, they lie so still.  Without a lifted head or twitch of an ear no one would know they were wolves.  We find them only because of a black wolf lying on its side (doing its rock imitation).  They lie there a long time until one gray finally sits up and howls.  Ears perk up.  Four grays stand up and shapes become real wolves.  We see the wolves howl, but can’t hear them – they must be too far away.  Two ladies from Seattle who are camping at Slough Creek share our scope while Tim helps a man from Indiana find the wolves in his scope.  All happy to see wolves, even at 30◦. 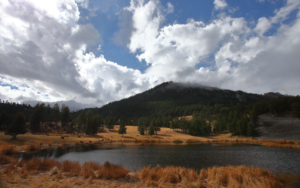 We drive toward Junction Butte and almost reverse when we hear there is a grizzly near Boulder, rushing there to find a sow and her cub of the year.  Both look really healthy with thick, shiny, silver brown fur, foraging in the flats only 200 yards or so from the road.  A noisy vehicle spooks the cub that takes off running, but soon returns to Mom’s side, staying stayed close.  A ranger keeps the crowd in check while sow and cub cross the road to the south and amble up the hills into the trees.

Back in Lamar Valley two wolves, a collared black and a gray, chase an orange bison calf near Soda Butte Cone.  By the time we reach Hikers Bridge the wolves have disappeared.  At first it was thought they were 926F and 965M, but no signals were confirmed for 926F so it must have been the Prospect males.  I would really like to see 926F and 965M and know for myself that all of the Lamar Canyons are well.  It’s been such a long time since we’ve seen them.  We continue to search along the road going as far as Round Prairie, but finally give up in the cold.

By this time it’s almost noon and “weather” is coming in.  At Junction Butte we roll down the windows to listen to the bison grazing at the bottom of the slopes.  Their grunts and snorts are a sort of comforting music.  One large bull protects a cow, chasing young bewildered bulls away.  The cow herself appears a little bewildered by his dominant behavior which includes digging a wallow and rolling and draping his head over her back.

We drive back and forth, avoiding snow and rain, moving toward sun. We take a short hike from Wrecker along the Yellowstone River.  This trail is closer to the river than the Garnet Trail Loop and it is a pretty walk above the water.  We walk down to the confluence of the Yellowstone and Lamar Rivers and cut back when soft, white flakes begin to fall and soon we are pelted by tiny grains of snow.

More back and forth until the sky clears again for a walk along Slough Creek.  The hillsides are dark brown, grass burned to dirt from the fires.  Signs still mark the trails as off limits.  The Junction Butte den looks fine.  The fires seemed to burn only grass – even the Marge Simpson tree is still there.  Two mergansers float along the creek winding peacefully through yellow grassy flats.  Two fishermen take off their waders in the parking lot.  It’s still cold, but sunny.

Stopping at Picnic we walk down to the cottonwoods.  Their narrow leaves are gold now, many blanketing the grass.  A bald eagle sails above us, flying along the river, fishing.  He is striking and watching those powerful wings above us is mesmerizing.  Despite the weather, today is a very good day.  It makes me appreciate the small miracles – the eagle flying, bison snorting, a coyote posing with a backdrop of fiery aspens.