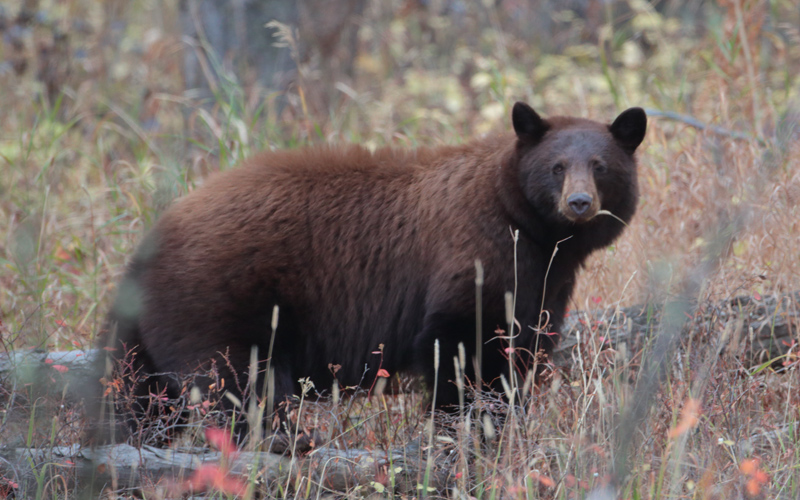 Two moose walk through the trees as we approach Round Prairie while photographers carrying huge lenses hike up the slopes.  Rounding the bend we see him in the willows – a big bull moose.  We turn around and park at Pebble Creek and walk in to see him well.  The big moose is staring down a photographer standing at the edge of the meadow.  Slowly a cow and calf walk out of the red willows.  The bull hardly moves, it snorts once and lowers his head.  A second photographer sets up a tripod at the edge of the meadow and the moose turns and trots toward the trees, his family following.

There are no wolves this morning in Lamar Valley or Little America, but there is a silver tipped grizzly foraging at the top of the ridge north of the road.  A classic with his silvery brown fur, broad shoulders and stout legs, we watch him make circles on the slope and dig for roots.  We share him through the scope with several people including a couple with Australian accents and a man who shows us a picture he took of a grizzly track, his glock placed strategically next to it for size comparison.  Yes, firearms are now allowed in the Park. 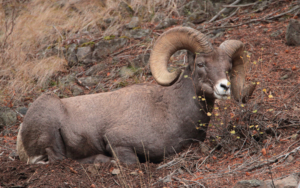 Most of the day is cloudy, the sun breaking out every now and then, the air icy.  A ranger at the north entrance gate cheerfully informed us both Dunraven Pass and the road to Norris were closed.  I was looking forward to a decent hike in the northern range when Dunraven opens and the Wapitis are in view.

The road across the pass has been sanded, but is still icy in places.  I am a little nervous driving those curving roads.  Hayden is not as crowded as expected and it’s colder standing out in the wind, sky overcast.  Like Wednesday, the Wapitis bed in the trees.  We can see a gray wolf curled up in a corner near a pine tree, tiny-tiny in our scope while other Wapitis could be the black rocks under the trees.

We drive to Gibbon Meadows where there was a carcass and see nothing; we felt like we wasted three hours.  After yet another drive up Dunraven, we stop at Tower and walk down to the falls and river where the Yellowstone runs toward the Lamar.  It’s beautiful here and turns out to be one of the best parts of the day.

As the sun begins to set we walk along the Lamar River Trail where willows glow gold and red-orange in the late afternoon light.  Cliffs above the river turn pinkish brown in the fading afternoon light.  The deep green of pines, fiery yellow of aspens, the red orange willows are hypnotizing.  This was the other best part of the day.

Driving back to Silver Gate we glimpse a grizzly making his way over the hill at Pebble Creek.  We wait in the parking lot, but he disappears.  Driving down the road an owl – a great gray or great horned – swoops across the road in front of us into the woods.  That’s what driving back at sunset does.  We should stay out later more often.