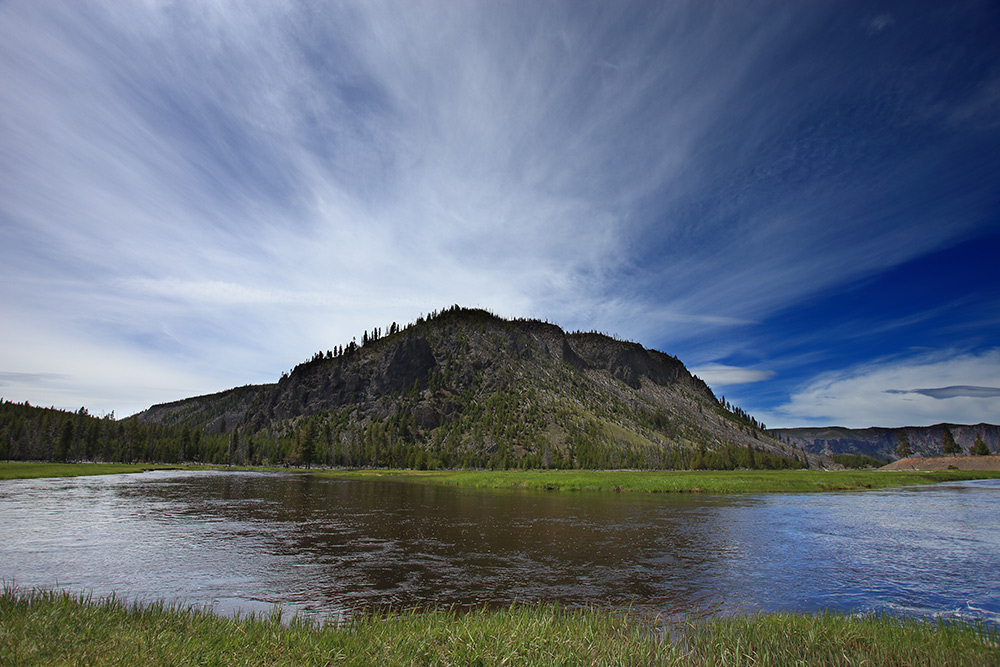 As we drove into the Park mule deer grazed alongside the road near Warm Creek.  The sun had been up for at least one hour and Yellowstone was well into its morning.  The cow moose we saw yesterday was grazing in the same spot in Round Prairie.  She is not the moose with two calves, but has only a single calf.  The moose with twins stays close to Silver Gate and can be seen in the willows there. 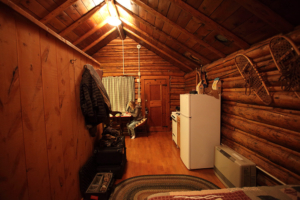 It was a quiet morning everywhere in the northern range.  There were no wolves at Slough Creek; the Junction Butte wolves were off somewhere.  Wolf watchers gathered at the Children’s Nature Walk across from Blacktail Plateau where a subgroup of the 8 Mile Pack has denned and has puppies.  There are six puppies, four black and two gray.  How anyone sees wolves that far away is beyond me; the rendezvous site is so far out.  Laurie tells me people stay and watch for six hours and see wolves only for minutes.  The alpha pair of the 8 Mile Pack denned near Sepulcher Mountain and have moved their pups to Gardner Hole.

Across from Yellowstone Picnic area, a pronghorn doe walks on the slopes of Junction Butte.  Tangled in her legs are more tiny legs – two fawns, probably only hours old.  They stumble after her.  The more adventurous twin runs circles around its mother and sibling on unsteady legs.  It seems to be saying “Look at this!  What is this?  Where am I?”  They are tiny versions of this fairy animal.  Mom guides them forward, keeping them close.

We wound our way leisurely toward Swan Lake Flats, passing Blacktail Ponds where a bison calf carcass lies, intact and untouched.  It has been days and is beginning to show signs of deterioration.  At Mammoth, the elk graze in the fenced meadows across from the church and Visitors Center, but we did not see any calves.  Stopping at the Hoodoos, we were greeted by a very congenial golden mantel chipmunk and two curious picas, all very photogenic.

At Swan Lake we scanned the flats for wolves and bears.  The 8 Mile Pack has been seen going back and forth across the meadows to their rendezvous, and Quad Mom, who has two cubs this year, can still be seen foraging here, as well as a courting pair of grizzlies.  Heading down the road vehicles are pulled over with people standing on cars, looking east.  A grizzly’s head pops up and moves through the tall grass in the meadow.  He makes his way through the sage and grass, grubbing, digging, circling.  We see him; he dives down and disappears.  Then he pops up again and begins loping, turning his head sideways, looking back.  Now I wonder if he might be a she, one of the courting bears, running from her pursuer.  We watch until the bear ambles into the trees out of sight. 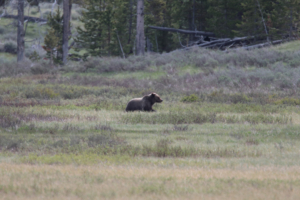 I forget how beautiful this section of the Park from Swan Lake to Norris is.  The marshy meadows surrounding Indian Creek and Twin Lakes are lush and green.  Recently, a moose was seen at Willow Park after many years, maybe a decade or more.  Over the winter several Park regulars commented on the number of moose they saw and the population seems to have grown dramatically.  When I first began coming to the Park, moose were easily seen in the Tetons, especially behind Lake Jackson Lodge, but not Yellowstone.

Road construction takes over after Twin Lakes and we crawled toward Madison Valley.  We are looking for Obsidian Bear, the grizzly sow with two coy in the burnout between Twin Lakes and Norris.  Years ago, Bear 264 was called “Obsidian Bear” because she inhabited the area around Obsidian Creek.  Now that title has been passed to another bear, perhaps one of her grandchildren or great grandchildren.

Madison Valley is one of my favorite places in Yellowstone, so peaceful with the Madison River winding gently through the flats and bison and elk grazing along the river.  Today an elk calf, about one month old, is with the herd, closely following its mother.  A light-colored coyote travels along the river shadowed by one of the elk cows.  The coyote steps into the river, hugging the bank.  It looks like it’s searching for duck or goose nests, but instead the coyote plunges into the river, drifting with the current and climbing out onto the opposite bank.  It shakes itself off, limping a few steps, and heads to the road. 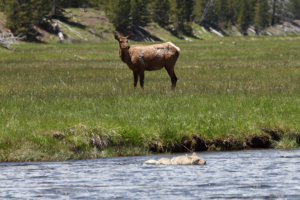 A day that began in the northern range gradually wanders to Canyon and Hayden Valley.  We look for bears and coyotes and see great blue herons, elk, bison and a variety of birds.  The weather ranges from sunny to cloudy to occasional drizzle, 28º to 58º.  On our way back through Tower there are two bear jams, one at the top of the road and one at the bottom, rangers rushing us through.  “No parking” signs are scattered along the road.  We stop to check on the peregrine falcon and this time the male is there too, waiting, perched nearby on a high cliff.

The park doesn’t seem as crowded as last June and certainly not as crazy.  So far there have been no great bear jams or bison jams; only road construction.  We have been switched to a new cabin that is small and not as well laid out as our last.  We are disappointed, but Soda Butte Creek is still running fast past our back porch.