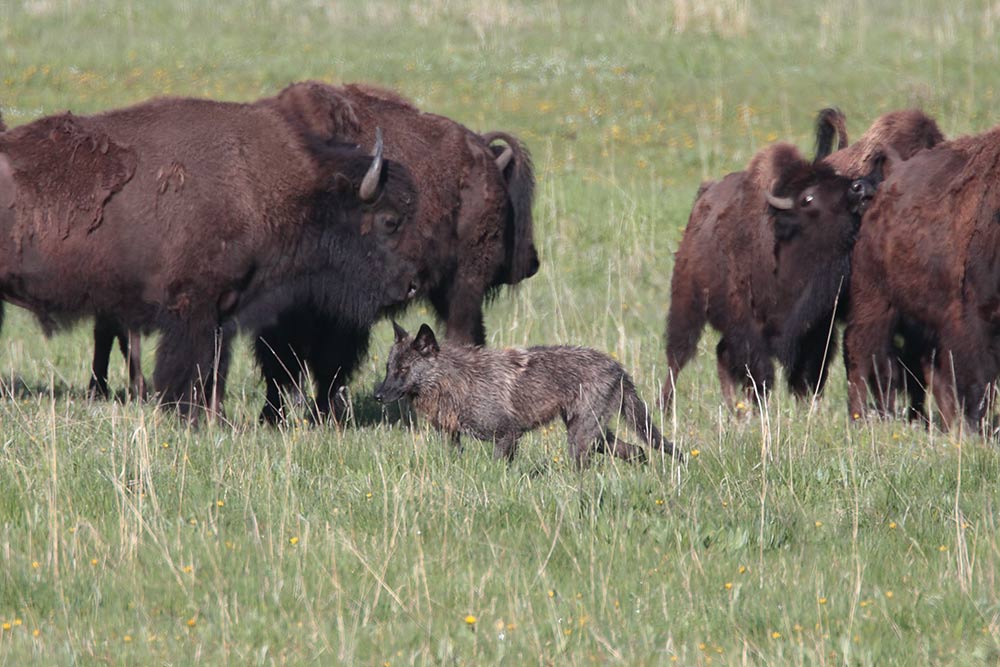 We heard raindrops pelting the roof of our cabin early this morning and lingered in bed thinking there was no rush, but the sun came out and the morning turned out to be clear, sunny and warm.  One of the Junction Butte yearlings was traveling through Lamar Valley at a good clip.  First sighted from Dorothy’s at the western end of the valley, by the time we saw him, he was almost across from the Institute.  The black wolves are getting their summer coats and this wolf had a chocolate brown appearance.  He continued west, approaching a few bison before moving on.  He managed to cross the road and zig-zag up the slopes on the north side.  Then we lost him. 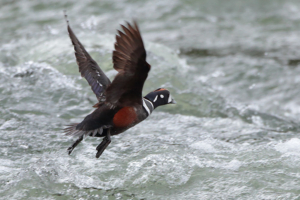 A second black wolf was then spotted on Jasper Bench.  It was 1109F who has puppies somewhere in the valley on the other side of Specimen Ridge.  She traveled along Amethyst Creek to the edge of the river and stepped in, crossing to a sandbar where an old carcass lay.  It was picked over, but 1109 tugged at pieces, chewing what she could find and left, moving west, probably returning to her pups.  Why 1109F dens far from her pack is a mystery; this is not the first time she has done this.  Last year and this year the core pack has lost puppies, but theories as to how and why are unclear.  It could be other wolves in the pack, disease, or the den site at Slough Creek is damaged or unsafe.  In any case, 1109F seems determined to keep her offspring safe.

We haven’t seen many grizzlies so far this year.  Raspberry and Snow, the mother and daughter grizzly pair we watched last spring, separated last summer and Snow, the subadult, is now on her own.  Today we drove the eastern edge of the park a little north of Norris Junction, 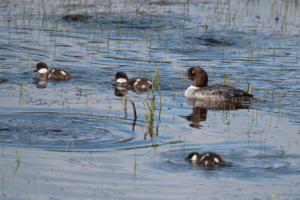 looking for two other sows with cubs:  the Beryl Springs bear and the Obsidian bear.  The Beryl Springs bear has two 2-year old cubs while the Obsidian bear has two coy.  We found the two 2-year-olds foraging along the slopes south of Beryl Springs, but neither Raspberry nor Snow were around though we drove all the way from Fishing Bridge to Silvan Lake looking for them.  The stretch from Sedge Bay to Cody is a very wild part of the Park.  There is nothing but dense forest and burnout.  Silvan Lake looks like winter, its banks still layered with snow.

The Park is getting busier and more crowded; today at Canyon almost all the parking spaces were filled.  It’s good to be back at Yellowstone Lake; though it’s a little pricey, it’s quiet and peaceful.  The lake stretches out like a large glass mirror; its shoreline seems endless.  I could sit by the water for hours, just listening to the waves lapping the shore.