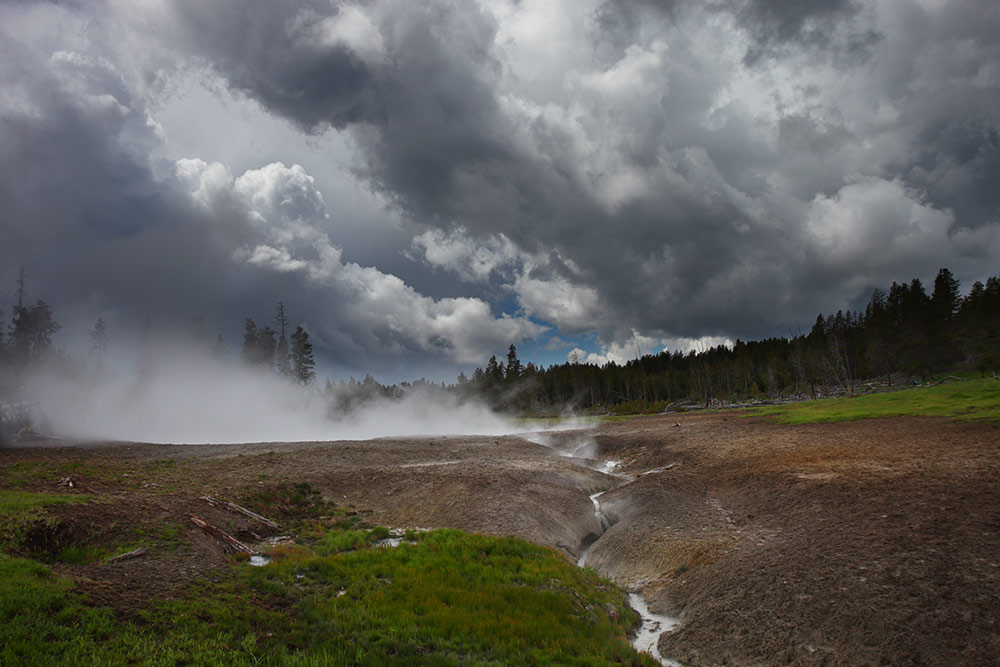 Our last morning in the Park was sunny and cold.  Passing through the construction between Fishing Bridge and Indian Pond without delay, we made one final effort to find Raspberry and Snow.  The lake at Mary Bay and Sedge Bays was still; bison grazed on the slopes in between thermals.  We drove past Lake Butte Overlook, searching the low meadows covered with deadfall.  No bears; a big disappointment. 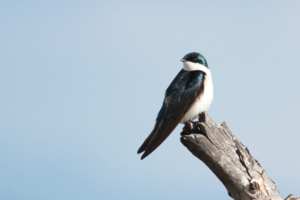 Hayden Valley was clear and sunny, a stark change from yesterday when the valley was enveloped in mist and we could barely see in front of us.  Wildlife watchers gathered at Grizzly Overlook and on top of hills looking for the Wapiti Lake Pack.  This pack has been seen very sporadically, crossing the road at odd hours of the day or feeding on a carcass.  Though we drove back and forth, stopping at Grizzly Overlook, Alum Creek, and other turnouts, we didn’t see them.  The white alpha female did not den on the east side of the river this year or last year where their rendezvous site could be seen from Grizzly Overlook even though it was very far away.  That area across the Yellowstone River has been home to three packs:  the Hayden Pack, the Canyon Pack and then the Wapiti Lake Pack, and over the years we have watched them all.  My mind is filled with pictures of the Hayden alpha pair and their descendants who formed the Canyon Pack and later the Wapiti Lake Pack.  Not seeing any of the Wapiti wolves feels like we have missed something. 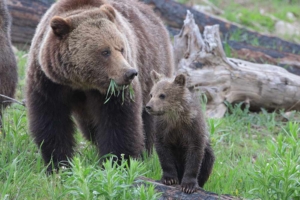 Hayden Valley is filled with elk.  I counted 27 cows in one herd bedded and grazing along the river with more elk on the opposite slopes.  They waded into the water, stepping carefully, slowly, gracefully to the other side.  Up the road at Alum Creek a bull stood in the water, backlit by the sun.  The valley seemed so peaceful.

It was hard to decide whether to go over Dunraven Pass and try to catch the wolves in the northern range or turn up the road at Norris and see if the Obsidian bear and her cubs were out.  We chose Norris and were lucky to find the three bears about a mile south of Obsidian Creek in a heavily forested area.  This Obsidian Bear is becoming dangerously tolerant of crowds and some people fear she is getting too close to the road and will lose her cubs.  The ranger waved her hands at the bear and she and her cubs loped up the slope into the trees.  A few minutes later they popped out of the woods along the road as a car came speeding round the bend and sent the three bears flying into the woods.

It’s always difficult to leave the Park; I always have this sinking feeling, like I’m leaving part of myself behind.  We walked around Mammoth and checked the great-horned owls’ nest in the giant pine next to the Albright Center.  Empty.  The owlets must have fledged.  At Rescue Creek, geese and goslings swirl around in the rapids.  The goslings are about one-third the size of the adults now.  They have lost their yellow feathers and are now a fuzzy gray with a little bit of yellow on their heads.  The adults bobbed up and down in the rushing water before being carried swiftly over the rapids while the goslings hugged the grassy shore.  Pronghorns dot the meadows and slopes along the Gardner River just outside the Park’s north entrance.  I miss the Park even before I leave.