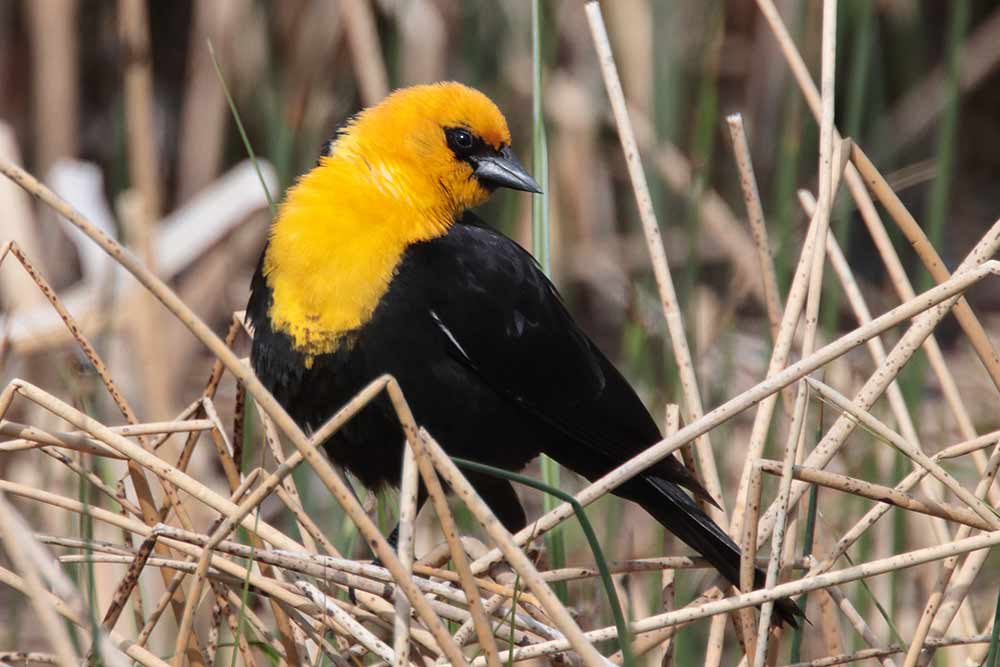 Enjoying the Wildlife in Yellowstone

There is still light over the mountains and a dusting of snow shines in the fading light.  It is almost 10 p.m.  I took a brief walk after dinner, gazing up at the tall lodge pines and the crescent moon.  Soda Butte Creek rushes past our little cabin.  When we arrived yesterday, it began to snow; fat, wet flakes that quickly melted on the deck and under the pines.  A coat of snow already clung to the deck, marked by large footprints.  In a tiny clearing near the cabin a cow moose and bison quietly grazed together.  There is a cow moose with two calves who frequents this area; perhaps that was the same cow, and maybe she left her offspring somewhere out of view, out of harm’s way.  Tonight all is quiet. 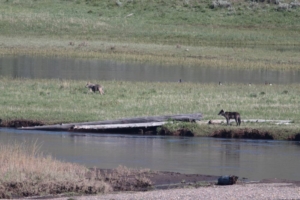 After yesterday’s drizzle and snow showers, this morning was a cold, but sunny 30º.  When the sun hits the snow-capped mountains, it brightens the whole landscape.  The clear blue sky is brilliant; Lamar Valley and Little America a vibrant green.  The first day of every trip brings a flood of memories and anticipation of what might happen this time.

Five wolves from the Junction Butte Pack were in sight at Slough Creek where a carcass lay half hidden in tall willows bordering the creek.  A black wolf walked back and forth from the carcass to the willows, eventually disappearing in the tall grass.  Across the creek on a ridge overlooking the water, four other Junction Butte wolves, two black and two gray, napped in the sage.

Near the carcass a potential conflict was brewing.  A coyote, smelling the carcass, moved in, approaching the carcass slowly but cautiously while ravens hopped about, pecking at the remains.  The coyote inched closer, aware of the wolf in the reeds.  Finally, she dug in, tearing at the hide.  The black wolf suddenly burst from the willows, wet from swimming the creek, and trotted in the coyote’s direction.  The coyote dashed to a nearby hill where she sat and stayed, barking.  In the meantime, the wolves on the ridge woke up from their meat slumber.  They raced along the opposite bank of creek toward the black wolf who tucked his tail and ran back and forth.  It seemed like the black wolf didn’t belong to this pack – until he dove into the creek and swam to the other bank where he was greeted by the other wolves, all wagging their tails in a joyous reunion.  All five wolves gradually made their way east along the creek and bedded on a low hill where they stayed the rest of the day. 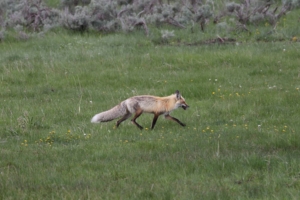 The Junction Butte Pack currently has 11 wolves, not counting this year’s puppies.  When we visited last June, the pack had just moved their pups from their den site on the slopes above Slough Creek, but it is unclear how many pups they have this year. There are three possible mothers:  907F, 969F and 1109F.  In early May, 969F and 996M were seen carrying puppies away from the den; watchers believe those pups did not survive.  Junction Butte Wolf 1109F denned on the south side of Specimen Ridge where some Junction Butte wolves have been seen carrying food.  Wolf 1047M is the pack’s alpha male and 907F is listed as the alpha female, though she has been challenged off and on by an uncollared black female.

The peregrine falcon who has nested in Yellowstone Canyon the past few years has nested once again in a rocky crevice below the Yellowstone Picnic Trail.  She sits on three chicks which hatched only a day or two ago.  The chicks are like large cotton balls with beaks.  Bighorn sheep and lambs also make the rocky cliffs home where they seem to move effortlessly up and down the steep slopes of the canyon.

Not far down the road, across from Calcite, a pair of Great Horned owls has nested in the fork of a dead tree.  Like the peregrine falcons, the owls nested in the same place last year.  The female perches on the edge of the nest facing away, partially covering her two chicks.  They too are fluffy white balls, though much, much larger than the peregrine falcon chicks. 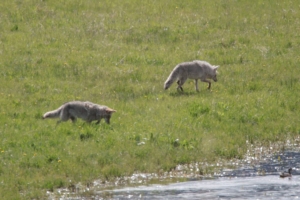 In the afternoon, we turned back through Lamar Valley where a cow moose grazed contentedly in the willows at Round Prairie.  Her coat was long, a mix of brown and gray.  She was almost hidden by thick brush, when I noticed a dark shadow moving through the willows behind her.  A minute or two later a little head with big ears and dark brown eyes popped up next to her.  A calf.

Wolves are not the only attraction at Slough Creek.  A pair of sandhill cranes nested this year at a small pond along the road and produced two colts this spring.  The parents step through the tall grass carefully on their long, spindly legs while the colts follow obediently.  The adults are a rusty brown and the colts look like miniature versions of their parents.  The adults take off in the morning leaving the colts hidden in the tall grass and reeds, returning around 6 p.m.  While we were waiting to catch sight of the sandhill family, Tim spotted a grizzly ambling along the slopes above Slough Creek.  It looked like he was going to the carcass, but changed his mind.

So much happened today, I cannot get it all down.  We saw three coyotes today; one barking at the Junction wolves and two mousing in Lamar Valley – a definite increase in the number we’ve seen over the past few years.