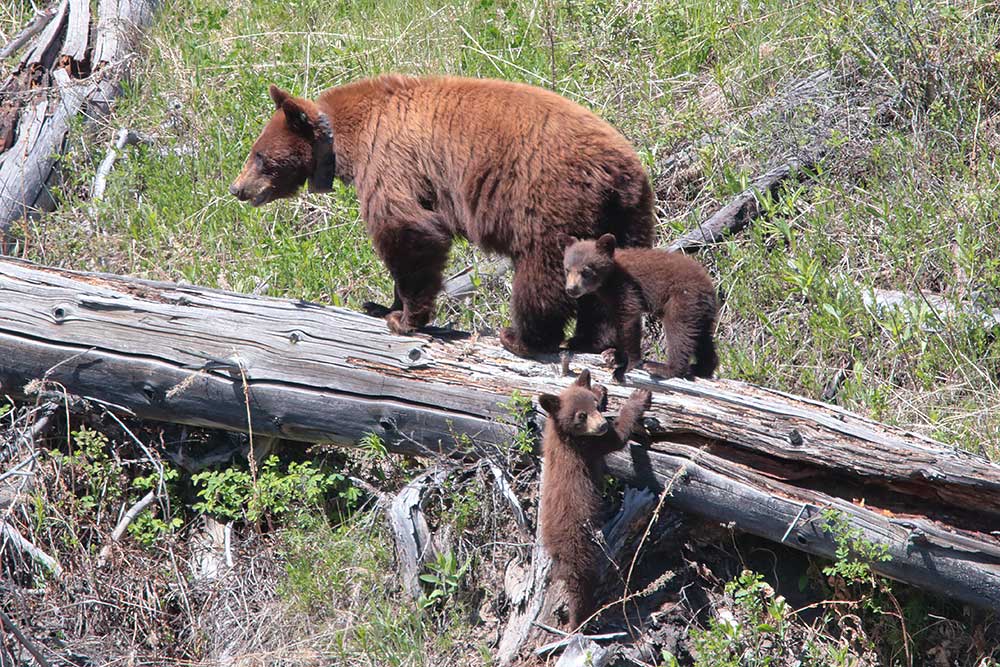 This was an off-day with no wolves in sight to keep us occupied in the morning.  We passed through Round Prairie and Lamar Valley, only stopping once or twice.  No Junction Butte wolves today.  We stopped at Slough Creek where crowds strained to watch two grizzlies on the opposite slopes.  The bears were tiny, even through scopes, unrecognizable except for their body language and shape.  At first, they looked like black bears.  One bear was a large brown grizzly and the other smaller and very dark, almost black. 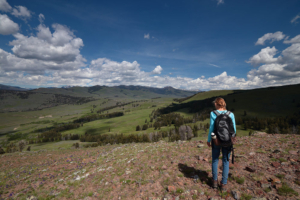 We drove as far as Hellroaring trailhead where we watched two park rangers and two wranglers prepare to head down the trail and into the back country.  They unloaded six horses, four already saddled, and fitted the two other horses with panniers.  The horses were fairly large, over 15 hands, and sturdy and strong.  It was fun to see these dedicated Park employees in action and well cared for.

We drove back and forth through Lamar Valley enjoying the bison with their calves and pronghorns.  At Petrified tree we finally saw a bear with two cubs of the year.  The black bear sow was a deep cinnamon while the two cubs were black-brown, sort of a dusty color.  One cub had a white patch on its chest.  The two little bears followed their mother through the grass, sage and deadfall.  They climbed on top of logs, hanging in the air, their legs dangling.  A string of trail riders wound past the bears and up a nearby slope. 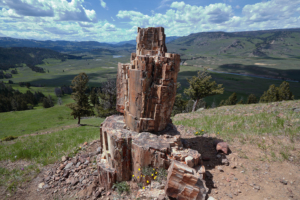 The trail leader yelled to the riders “Shorten your reins,” but most of the horses just marched ahead while the three bears ignored them.  Also ignoring the crowds was another black bear foraging near the Yellowstone Bridge.  It ambled along the road and down the slopes toward the river, followed by a stream of visitors as a ranger tried to control the crowd.

Most our hikes so far have been moderately easy without much elevation change.  Today we embarked on a death march.  The trail began from the road in Little America and climbed straight up to the Petrified Forest and Specimen Ridge where it overlooks Little America.  It winds through thick stands of pine trees and meadows filled with wildflowers, but is steep, long, and strenuous.  I knew this hike was too difficult for me, but here we were and under the worst circumstances – we left our hiking poles and rain gear in the car.  Students from Minnesota State’s geology department trotted up and down the path like mountain goats while we swore the whole way up.  I sat down a few times to rest and catch my breath.

When we reached a rocky knob, we took a break and I hoped it was the end.  Tim found ancient petrified trees scattered about.  I saw a pronghorn doe with a fawn.  She stared at me and I stepped back, concerned she would be too stressed. 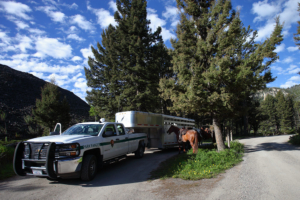 We pressed on to the top, a mountain meadow covered with wildflowers overlooking the other side of Specimen Ridge.  Suddenly all our efforts and exertion faded into the landscape before us.  We could see Lamar Valley and Jasper Bench, Slough Creek, Junction Butte, the peregrines, Mom’s Ridge, and Boulder.  The wildflowers are spectacular, an explosion of colors:  phlox, larkspur, shooting stars, prairie smoke, forget-me-nots, daisies, asters.  High above the world, these flowers flourish.  It is beautiful there; a wide stretch of land that seems untouched.

Going down the trail was not necessarily easier, but it was faster.  The trail is sandy and slick in some places and we had to be careful not to slip.  It’s also rocky and blocked by deadfall in a couple of places.  As we neared the last stretch it began to rain, fat drops that were welcome after the heat of the afternoon.  Light rain soon turned into a brief storm with long arms of lightning, hunger and pounding rain.  We made it to the trailhead just in time.