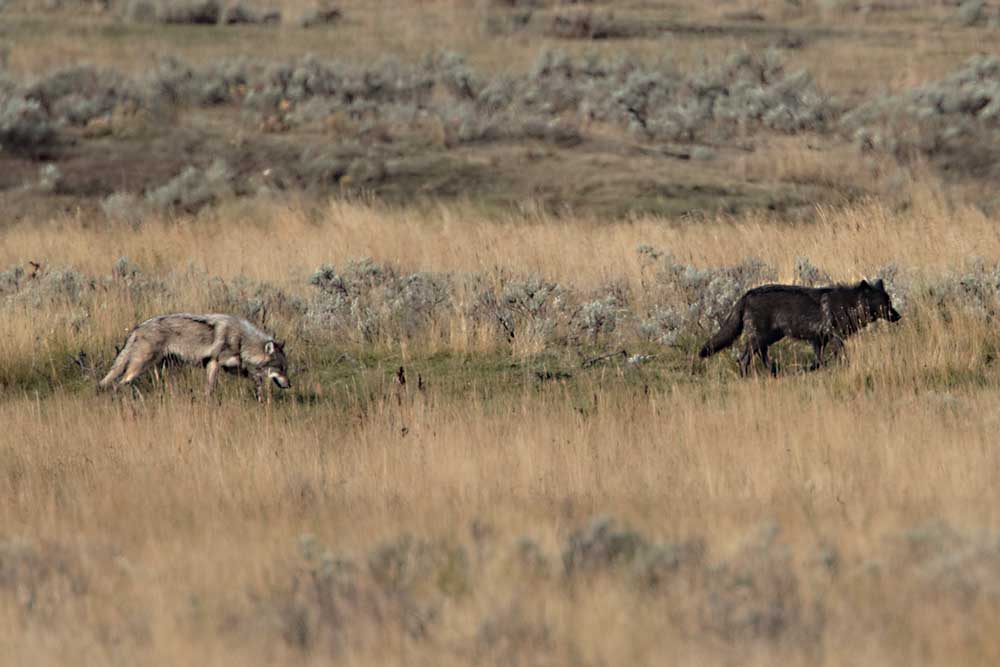 Today we spent a good part of our morning and afternoon watching the Junction Butte Pack, both pups and adults.  In Lamar Valley, nine wolves were bedded or milling around in the flats not far from the carcass site.  The wolves were obviously pups, chasing each other, annoying each other, playing tug of war with an unknown object.  Eight blacks and one gray.

We watched from a hill next to Exclosure as the wolves continued playing, gradually moving west.  A gray and five blacks traveled across the valley, stopping to investigate a herd of bison.  The young wolves tried out their skills, chasing the huge bison and being chased in return.  Slowly they weaved through the herds, stopping to pounce on a vole or pick up a stick and run off with it. 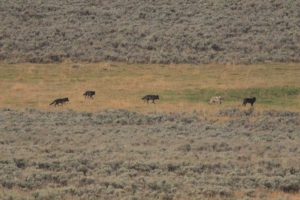 From east of the rendezvous they traveled along the river bottom, playing on the gravel bars, chasing each other.  We followed them to the bottom of Jasper Bench, where a herd of ten antelope dashed off at top speed at the sight of them.  The pups’ size belies their age, but their antics give them away.  The pups are large, even though they are barely six months old now.  Unless a pup stands next to an adult, it’s hard to tell it’s a pup.

The six pups trotted along the Lamar River, leaving three black wolves dragging behind and stopping to explore a gravel bar for what seemed like hours.  Second guessing their next move, we turned back to Fisherman’s.  Our mistake.  The pups traveled only so far along the river before turning back and running up Jasper Bench.

When all the wolves were out of sight, we backtracked to Round Prairie where a bull moose, cow and calf have been seen in the willows and at the edge of the woods for the past few days.  We waited – and then waited some more – but in the middle of the day it was unlikely that the moose would move out of the trees, so we drove on to Blacktail and just on a hunch stopped at Hellroaring.  A large herd of elk was bunched up on the opposite slope miles away, three bulls on alert patrolling the circumference.

Curious about this behavior, we set up the scope and scanned the distant slopes.  Tim found one black wolf and then three more wolves, a black and two grays.  We had no idea who these wolves were and thought they might be the Phantom Lake Pack, a pack led by 1005F who was born into the 8 Mile Pack.  At first, the wolves remained bedded, but suddenly the four wolves rose and took off after the elk, briefly scattering the herd.  The elk stayed bunched together while the wolves, fended off by three bulls, retreated.  From miles away the wolves are tiny and barely visible unless moving; without any action, no one would know they were there at all. 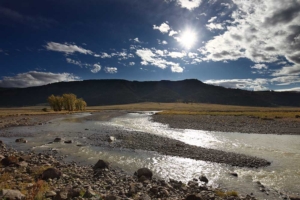 We kept our vigil, trying to count wolves in the tall yellow grass and sage.  Then something spooked the wolves, sending seven or eight wolves running toward the top of Hellroaring.  Hikers!  They marched up the slopes of Hellroaring toward the elk, probably not even aware of wolves.  Way off trail, they might have been researchers or part of the Wolf Project.  In any case, the wolves had vanished.

A wolf watcher who stopped told us that early that morning the adult Junction Butte wolves were seen here, so the wolves were most likely Junction Butte wolves.  The numbers added up.  Nine wolves in Lamar, eight blacks and one gray which account for seven pups, and two adults (as baby sitters).  Eight adults at Hellroaring, including the three grays (907F, 969F, and yearling) and the two blacks I saw.  Four wolves were not seen – 1109F and her three pups who may be on Jasper Bench.

After watching wolves for most of the day we hiked the path across from Yellowstone Picnic area that follows the Yellowstone River and meets the Lamar River.  It is quiet and peaceful as the river rushes alongside us.  Coyote tracks imprint wet gray sand at the confluence and a dipper wades between rocks in the river.  It feels much cooler than 67º, especially with the wind.

We stopped at Fisherman’s again, this time to walk along the gravel shore of the river.  An elk skeleton is sprawled in the rocks and sand a few yards from the water.  I look around for antlers, but find only two protrusions on each side of the long, narrow skull.  I am so much more conscious of the cycle of life and death here.

Since we missed the moose for the past two days, we felt compelled to wait at Round Prairie for a bull or a cow to materialize.  We wait at least an hour, walking along Soda Butte Creek, sitting in the car.  It is getting dark and we’re tired of waiting.  Another truck leaves and then we do too.